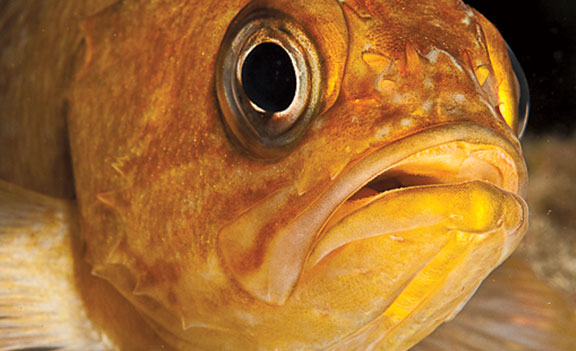 The World Of Fishes: A Primer for Divers 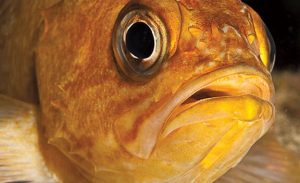 Fish fanatics. That term is an apropos way to describe a lot of divers. Those of us that fit the description love the seemingly endless variety of shapes and colors found in fishes. We are fascinated by their antics and the ways some species blend into their environment while others standout. We get a charge out of learning about and watching their courtship rituals, displays at cleaning station, the challenge of trying to identify and photograph them, and so on and so forth. But ask many fish fanatics exactly what makes ichthyologists classify creatures as varied as a garibaldi, moray eel, pygmy seahorse, and whale shark all under one roof, and you will probably see a lot of head scratching.

So, let’s dive into the world of fishes. Whether or not you think of yourself as a fish fanatic, I hope your appreciation for these aquatic wonders will deepen from the presented information.

Many species of fishes that are known to exist are yet to be classified, and new species are being discovered on a regular basis. Tragically, some are becoming extinct; and much of the deep ocean has yet to be well explored. These and other factors make it impossible for anyone to state with absolute certainty the exact number of fish species in the world today. Suffice it to say, it is generally agreed upon that the number is somewhere north of 24,600, and some specialists believe almost twice that number to be more accurate.

Ichthyologists define fishes as cold-blooded, finned, aquatic vertebrates that respire by passing oxygenated water over gills. Specialists classify all currently living fishes in two superclasses that are further sub-divided into four classes. The superclass Gnathostomata, the vertebrates with jaws, includes all of the world’s cartilaginous fishes (sharks, rays and skates) as well as all fishes that have skeletons made of bones. In turn, all sharks, rays and skates are further described in the class Chondricthyes while those species with bony skeletons are described in the class Osteichthyes. More than 95 percent of all known fish species are bony fishes.

The superclass Agnatha includes the hagfish (class Myxini) and lampreys (class Cyclostomata). These fishes lack jaws, and most sport divers will never have any contact with them in the wild.

Some fish species can be found in almost every permanent body of naturally occurring water on earth. A number of factors ranging from water temperature, salinity and depth to the amount of available sunlight and food play fundamental roles in determining where various species occur. As mere humans, we might not see or feel these factors, but the lives of fishes depend on their ability to respond and adapt to them.

All fishes must create an osmotic balance between the tissues in their body and that of the surrounding water to maintain within acceptable parameters for the proper levels of fluids and electrolytes in their bodies so they can survive. We often think of fishes as living in either saltwater or freshwater, but that is not the case. Species such as mullets, flounders, halibuts, soles, turbots, and snooks live in estuaries and other brackish water regions where the percentage of salt in the water changes according to the tidal flow and the influx of freshwater due to storms and floods.

In contrast, salmon, sturgeon and some trouts among other species live the majority of their lives in saltwater environments but swim up streams that are mostly freshwater to spawn and lay their eggs. These species are said to be anadromous. Other fishes including a variety of eels do the exact opposite living the majority of their lives in freshwater, while entering saltwater to spawn. They are said to be catadromous.

As is the case with all vertebrates, fishes are equipped with sense organs that inform them about their surroundings. These organs enable fishes to see, hear, smell, taste and touch.

Generally speaking, the sense of sight is well developed in fishes, although different species depend upon sight to significantly different degrees. Speaking in general terms, species that live in relatively clear, shallow water such as giant kelpfish and señoritafish likely benefitting more than others. Many eels provide exceptions to this statement. Some fishes that live all, or the vast majority, of their lives in caves, or deep, dark waters such as a variety of brotulas, including the rarely encountered purple brotula found in California waters, are blind, or nearly blind.

While fishes lack outer ears and eardrums, they do hear sounds as vibrations that are transmitted from their surroundings into and through their body tissues. The sense of smell is highly developed in sharks, eels and many other species, but much less so in others. In the majority of fishes, olfactory organs on each side of the snout that look like small nostrils are lined with nerves that are very sensitive to odors in the water. Smell and taste are closely related, and most fish have some taste buds in their mouths. However, in many fishes the sense of taste is much less well developed and not as heavily relied upon as many people suspect it is.

All sharks, rays and skates are equipped with gel-filled pit organs known as ampullae of Lorenzini that help these fishes detect electrical fields produced by biological functions such as the heartbeat and contracting muscles of nearby animals. The organs in this “sixth sense” are concentrated in the snout, but that run the length of the body. With a careful look, they can be seen by the naked eye. This sense is well developed and greatly assists cartilaginous creatures in their effort to detect potential prey and other nearby animals. The organs are not found in bony fishes.

Generally speaking, the muscles fishes use to produce the power to swim make up roughly 80 percent of their bodies. In order to swim, a “stereotypical fish” alternately relaxes and contracts muscle blocks on opposite sides of its body in actions that create a series of waves that begin near the head and travel along the body. A fish’s skeletal system serves as a fulcrum for the muscles, enabling them to gain leverage as the muscles contract and relax.

But the wave that moves down a fish’s body is not enough to produce a significant amount of forward movement. Fishes need to push against the water in order to move efficiently. Studies have revealed that the movement of their bodies and fins create eddies, or vortices, and fishes are able to push with their bodies and tails against the “walls” of swirling water to move forward.

An internal organ known as the gas bladder is present in many bony fishes. In those species that possess a gas bladder, adjustments in the volume of gas in the gas bladder help a fish achieve a state of neutral buoyancy, ascend or descend without having to expend much effort swimming, and, therefore, help prevent expending extra energy.

Fins serve not only as a means of propulsion, but they also make fishes more efficient swimmers as these appendages are used to maintain balance by controlling roll, pitch and yaw, and to assist in the finer aspects of maneuverability when turning and hovering.

Why Some Fishes School

Approximately 80 percent of fish species school as juveniles, while roughly 20 percent school as adults. Exactly why some species school and others do not is a question that has gnawed at scientists for years, but a number of theories are generally accepted.

The concept of safety-in-numbers is believed to play a significant role in the schooling behavior of many species, especially in relatively small fishes. When being pursued by a predator, gathering together in a school and being able to “hide” in a group is likely to increase the odds for survival of any one fish compared to the survival odds of being alone. Conversely, various carnivorous species such as tunas and, jacks are believed to school to increase their chances of capturing prey through cooperative hunting efforts that help “corral” and confuse prey, thus making the desired prey an easier target. Herbivorous fishes such as opaleye and halfmoon use the increased numbers in schools to overwhelm the defenses of territorial fishes such as many damselfishes in order to gain access to food.

In terms of reproduction, fishes run the gamut with various species being heterosexual, hermaphroditic or parthenogenetic. In the most common form of reproduction, heterosexual reproduction, there are separate male and female parents, but there is a lot of variation within this group. In some species males are males and females are females from birth or hatching. Some species are monogamous for a season and some for life, while others are monogamous within a given territory. In still other species, females that remain in the same territory carry sperm from several males.

In hermaphroditic reproduction, each adult fish produces viable sperm and eggs, meaning the same fish functions as both male and female. In some cases, each adult fish is one sex at a time, and is referred to as a sequential hermaphrodite. In simultaneous hermaphrodites, the same fish is simultaneously male and female. In some hermaphroditic species such as sheephead, specific fish change sex depending upon the parameters of the population they are part of, and in other cases the same fish can serve as both a male and then as a female or vice versa within a matter of minutes. In case you are wondering, self-fertilization does occur in some species.

In the rare parthenogenetic species the role of the male is to mate with the female in order to stimulate the development of her eggs, but it is unfertilized eggs that develop into embryos.

Although fishes such as blue, mako and great white sharks bear live young, horn sharks are egg-layers as is the case with the majority of fishes. In some live-bearing species fertilized eggs are held and hatch inside of the mother but the held eggs do not receive any nourishment from the mother. These fishes are said to be ovoviviparous. In other live-bearing fishes the eggs do receive nutrition from the mother’s tissues. The word viviparous describes these species.

Fertilization occurs internally in cartilaginous fishes and in some species of bony fishes. External fertilization is the norm in other species.

The existence and degree of parental care also varies greatly in fishes. Many species release eggs and sperm into the water column, and then they disperse, thus the parents abandon any potential offspring. Many other species such as the garibaldi and cabezon build nests, and one or both parents protect and care for the eggs. In still other species, one of the adults carries the eggs and sometimes the hatchlings, often holding the eggs and hatchlings in their mouth, gill cavities or a body pouch in order to protect them.

When to Use the Word “Fish” and When to Use“Fishes”