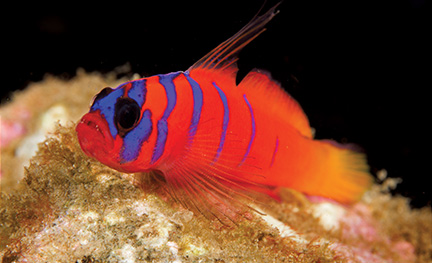 Kingdom, Phylum, Subphylum and So On: A Diver’s Tour of the Taxonomic System

Imagine walking into an introductory biology class, and on day one your teacher presents you with specimens of one male, female and juvenile of every living species found in the world’s oceans. Next, your professor adds in all of the fossil evidence known to science. Your semester-long assignment: “Start sorting, make sense of it all, and create a system of classification that will be accepted by scientists worldwide.” With just under two million extant (living) and many more extinct species, it’s not hard to imagine that a lot of people would decide to drop that class before hearing another word.

Thankfully, others have already completed much of the ongoing task, which is painstaking and complicated. At times, it is also controversial. But this task is just another day at the office for biologists, taxonomists, and other specialists as they try to “make sense” of the natural world and organize their knowledge in a way that has universal meaning.

Let’s imagine you’re on a California dive boat, talking about the marine life you just saw. It’s plausible that you might hear someone say he or she just saw a “beautiful giant sea star” only to have their dive buddy chime in and say “no, that was a knobby sea star.” Yet a third person adds that they thought it was a “giant-spined sea star.” So, the bets are made as everyone grabs their reference book in the effort to validate their claim. A few minutes later, each diver is ready to collect their winnings only to discover that the same animal is known by three different names in the three books.

That’s right. One species has at least three common names, and if you also accept the spelling giant spined sea star (no hyphen), it can have at least four. You can find a similar example with the beautiful fish named the bluebanded goby. Or is it the blue-banded goby, or Catalina goby? It is the same fish.

But that is not the end of the story. It is equally confusing when different species share the same common name. That is the case with two California species that are both known as the “red crab.” The larger species is a valuable food source, while the smaller has no food value. If your buddies told you they just saw a red crab, you would need to see a photograph or receive a detailed description before you could be certain about the species they were referring to.

Obviously, the potential for confusion and miscommunication that can result from the use of common names is completely unacceptable with regard to the exactness required by scientists. In their work and communications, scientists routinely need to be able to clearly distinguish each species from every other.

By the time we graduate from high school most people are aware of the concept of taxonomic (aka scientific and binomial), names given to various species of animals. However, if you are like most people, this information probably resides in a part of your brain that doesn’t get used very often. Nevertheless, when you want to learn about the animals you see when you go diving, it is often helpful to have some idea about the basics of the taxonomic system.

With one unique taxonomic name given to each species, the Taxonomic System is the universal system for precisely classifying and discussing organisms. The Swedish naturalist Carolus Linnaeus created the system in 1758. Linnaeus, who came nearly a century before Darwin, had no concept of evolution and simply grouped organisms according to similar physical characteristics. In the system Linnaeus created, each organism is given a name consisting of two words: first the name of the genus and, second, the name of the species. You are probably familiar with the name Homo sapiens, the genus and species words given to humans.

For the most part, the taxonomic system has held up over the 250 plus years of its existence, but it is continuously being modified as new discoveries are made and new technologies are applied. The ability to research and classify by using small DNA samples is currently having a significant impact in taxonomy, and this development has led to, and will certainly continue to lead to, numerous revisions in the classification of life forms.

A simplistic definition states that in order to be a member of the same species, adult males and females must be able to successfully produce offspring when they mate. But that does not clarify the manner in which the other six major categories in the taxonomic hierarchy are defined. Going in order starting with the level of organisms that share the most general characteristics to the category with the fewest shared traits, the major categories, or taxonomic ranks, are kingdom, phylum, class, order, family, genus and species.

Surprisingly perhaps, specialists explain that all categories other than species are artificial. Those groups have been created by specialists to help recognize and label similar organisms in a useful way. Of course, the categories are not randomly made. They are organized to reflect known or assumed evolutionary relationships between various life forms.

Not too many years ago, taxonomists classified all organisms as belonging to one of two kingdoms; plants and animals. Today, most taxonomists recognize six kingdoms. As sport divers, we are primarily interested in organisms described in the kingdoms of animals, plants and protists (includes kelps).

Annelida: segmented worms such as Christmas tree and bristle worms

Each phylum is subdivided into classes that are divided into orders, the orders into families, the families into genera, and finally each animal in every genus is given its unique species name.

In theory, every genus is comprised of a collection of very similar, but genetically isolated species. This would be true if the simplistic definition of a species provided previously were absolutely true. But the simplistic definition is not the whole story, and sometimes males and females of different species are able to reproduce, thus creating hybrid organisms. Divers in tropical waters sometimes encounter hybrid angelfish, but making positive identifications in the wild is a tricky affair best left to specialists.

In some instances, there are subcategories such as suborders and subspecies. As a rule, only specialists need to know all of the intricacies of classifying an animal, but every once in a while, you might encounter subdivision terms as shown in the photos of the garibaldi, humpback whale and California spiny lobster on page 22.

A basic understanding of the taxonomic system can help you better understand the natural world. By noticing certain external characteristics of the marine organisms you encounter, it is often easier to gain an understanding about where a given animal, plant, or protist fits in the natural world. While various species have their differences, in many instances some generalizations can be made about animals that are similarly classified. In addition, the taxonomic system also enables you to more quickly and easily identify organisms based on casual observations.

Now, when you come up from a dive, rather than asking, “What was that bizarre looking, purple and orange, long, skinny thing on the bottom?” you can now more intelligently ask, “What is the name of the nudibranch we saw next to the sea cucumber?” In essence, you don’t have to speak the taxonomic lingo, but it opens a lot of doors in the hallway of understanding.