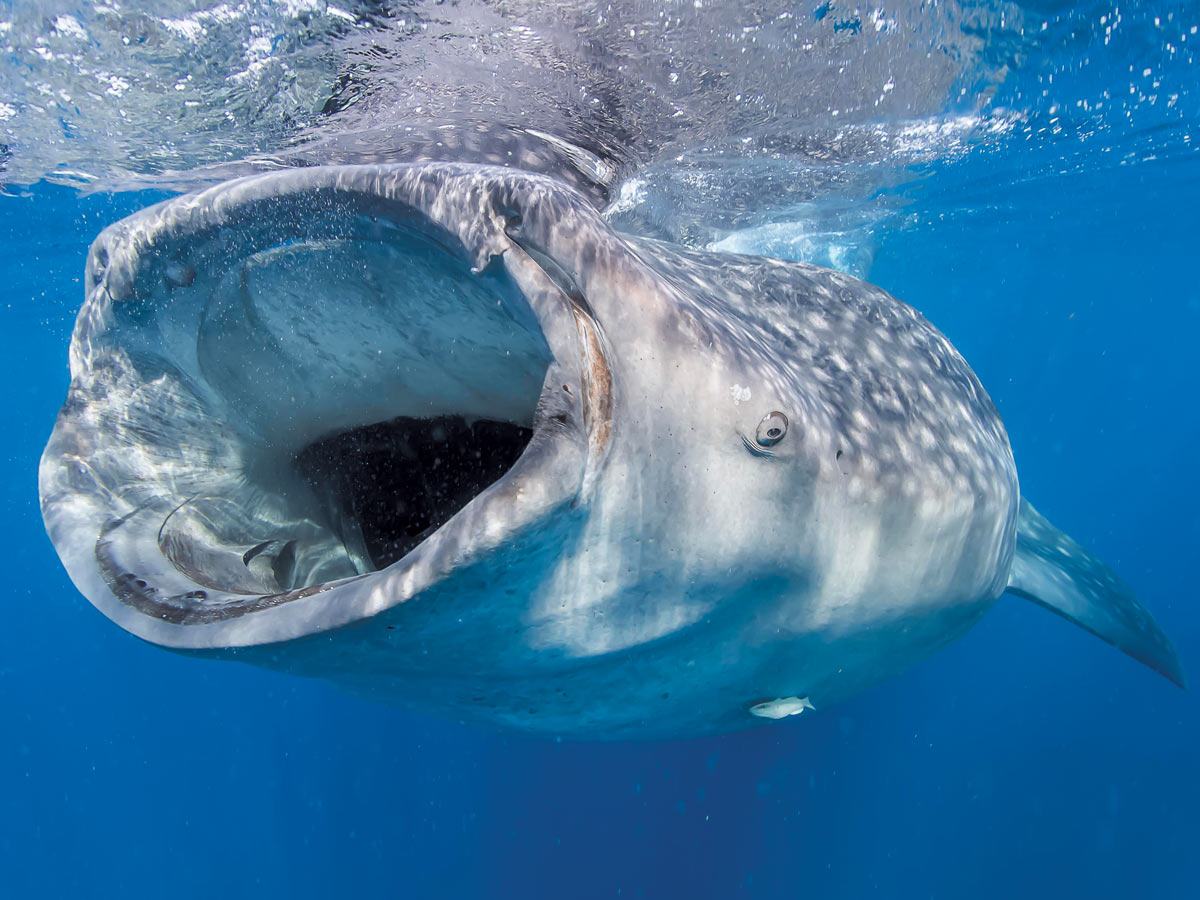 By Marty SnydermanJuly 11, 2022No Comments

For many divers, a whale shark sighting is analogous to finding diving’s Holy Grail. Over the years, untold numbers of divers have made countless excursions in pursuit of their dream dive. Fortunately, in recent years the diving community has discovered several places where whale sharks reliably aggregate and where water conditions are generally good during certain times of year.

Rhincodontidae. Like the basking shark, the whale shark is the only species in its family. 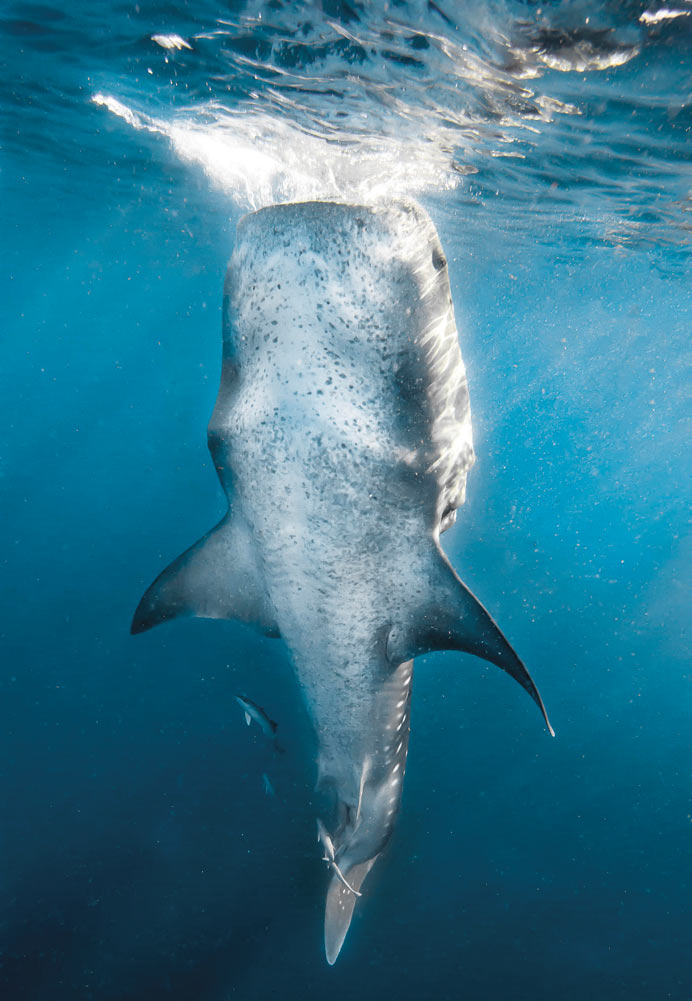 Whale sharks sometimes gather prey by sucking it in at or near the surface with their bodies oriented in a head up/tail down manner. Photo by Marty Snyderman.

The common name whale shark is an obvious reference to the enormous size of whale sharks. Numerous sources list the maximum length as being approximately 42 feet with a common adult length being closer to 33 feet. The maximum reported weight is 34 tons. Size alone makes it rather easy to identify whale sharks. The body is generally streamlined and somewhat flattened with the head being even more flattened. Whale sharks have a wide, flattened mouth located the front of the face (terminal position). Other features include small eyes compared to the overall body size, large gill slits, a tall first dorsal fin that is significantly larger than the second, numerous whitish spots on the top and upper sides of the body, and a semi-lunate tail with the upper lobe being larger than the lower lobe.

While the body color of whale sharks varies, they are generally dark brown to grayish to dark blue or black. The underbelly is off-white.

When actively feeding, whale sharks swim mouth agape. The size of the cavernous mouth is staggering, and a sighting creates one of the more memorable moments that a diver can ever experience.

The whale shark is a widely distributed species. With the exception of the Mediterranean Sea, whale sharks are known to occur in all tropical and warm temperate seas, usually between 30°N and 35°S. Although whale sharks are generally considered uncommon, there are several areas around the world including Ecuador’s Galapagos Islands, the Maldives, the Philippines and areas in Mexico, Australia, Papua New Guinea, and Indonesia where they aggregate.

Unlike most bottom-dwelling species described in their order, Orectolobiformes, the whale shark is a pelagic animal that inhabits the water column in the open sea, shallow areas close to shorelines and bays, and the lagoons of coral atolls and reefs. Whale sharks prefer areas where water temperatures at the surface range from 70° to 86° F and where plankton productivity is high. Whale sharks are also commonly observed in areas where some fishes are actively spawning in large aggregations and in areas where corals are spawning, as the spawn serves as a food source.

Although it is very rare and usually during El Niños, whale sharks have been encountered in the waters of Southern California. 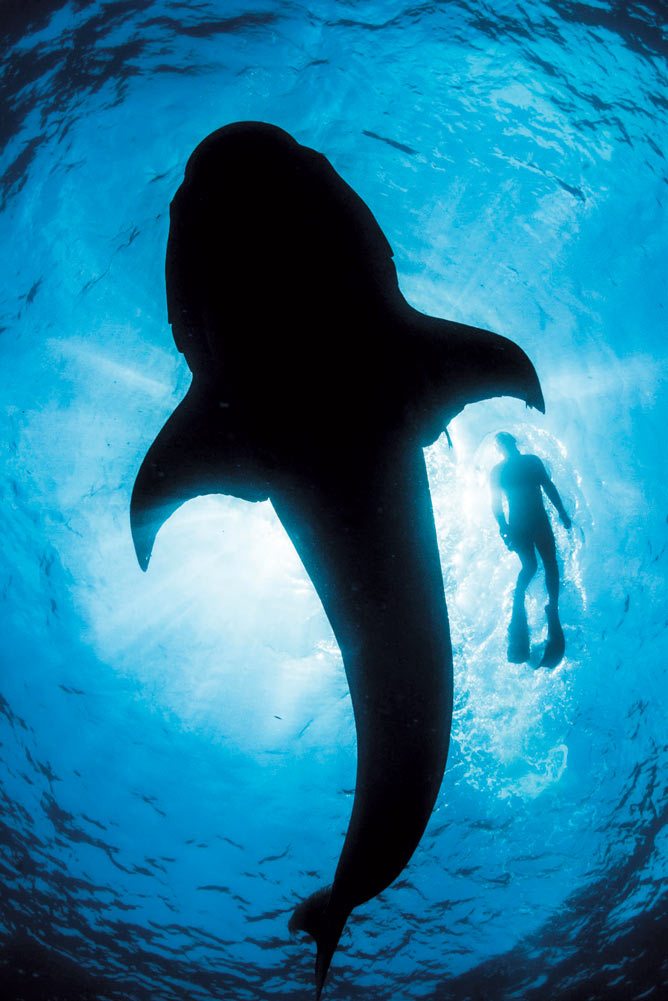 The common name whale shark is an obvious reference to their enormous size. Photo by Marty Snyderman.

Filter feeders, whale sharks consume a variety of sources including microscopic-sized planktonic organisms, some free-swimming crustaceans, squids, the spawn of fishes and corals, floating fish eggs, and some small fishes. When actively feeding, a whale shark can filter more than 1,500 gallons of water per hour.

While whale sharks can gather food simply by “opening-wide” and slowly swimming through dense concentrations of plankton and other food sources in a feeding method known as ram filtration, they do not depend strictly on this method to take in food as filter feeding basking sharks do. Whale sharks have the added ability to create suction by opening and closing their huge mouths. This enables the sharks to take in large quantities of food-filled water at a faster rate and gives them an advantage when feeding on small actively swimming prey.

The mouth of a whale shark holds as many as 3,000 teeth set in 300 to 350 rows in each jaw. The tiny teeth are less than one inch long and are not used for feeding. Some specialists suspect that the teeth are holdovers from ancestors that fed on larger, more active prey. The mouths are also equipped with approximately 20 feeding pads. These tissues are dotted with as many as 10,000 pores that help trap small food items, and that are not easily clogged. Larger food items pass to the back of the throat where thousands of roughly 4 inches-long gill rakers, structures that protect delicate gill tissues, collect food items before they are moved down the digestive tract. Essentially everything that is not passed through the gills gets consumed.