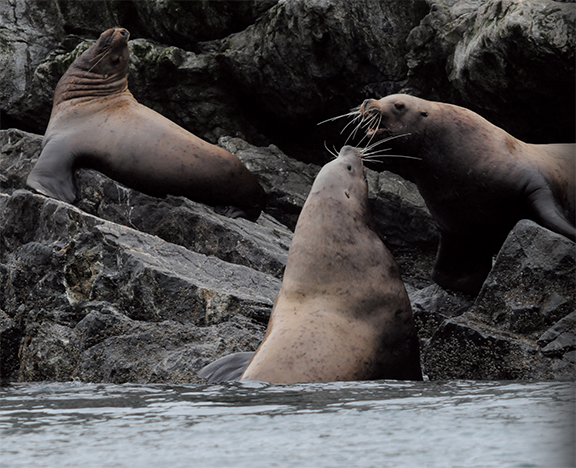 Steller: How a Sea Lion, Sea Cow, Birds, a Mollusk and Plants Came to Share a Name 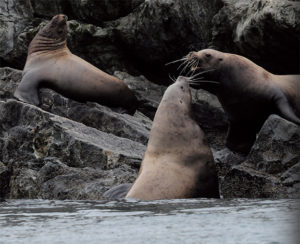 A glass globe of the earth sitting in sand of a beach with waves crashing in the backgroundAs a diver, encountering Steller sea lions in Alaska was an exhilarating experience. In appearance they are similar to California sea lions, only BIGGER. Couple their size and pack mentality with a highly developed sense of play, and you get the picture. I’ve also spotted Steller sea lions at the Farallon Islands off San Francisco and at Fort Ross at Sea Lion Rock.

As a birder, it has always been a pleasure to see and hear a Steller’s jay. This beautiful blue-tinged jay has a raucous call and a comical appearance when its expressive black crest feathers blow askew in the breeze. This bird proved to one early seagoing explorer that he had reached the northern shores of North America and that Alaska was part of North America.

It wasn’t until a road trip along coastal Northern California that I learned how a large, playful pinniped and a noisy mountain bird acquired their names. Thanks to an exhibit at the Fort Ross State Historic Park, Sonoma County, California, I learned about Georg Steller, an intelligent, adventurous, compassionate man who made valuable scientific contributions to natural history. Along the way he got into trouble defending indigenous peoples and died tragically young responding to his accusers.

Georg Wilhelm Steller was a German botanist, zoologist, surgeon and explorer whose name adorns several species of animals and plants that he encountered and described for the first time to science while exploring the North Pacific, Russia and Alaska. He was the first European to set foot in Alaska and the first to describe the sea otter to science. Unfortunately for the charismatic and gregarious otter, it was the animal that would become most associated with the rapacious marine fur trade.

Steller was born in 1709 in Winsheim, Germany, near Nuremberg, and studied at the University of Wittenberg and in Berlin. He studied botany, zoology and medicine. After his studies Steller joined the Russian army, working as a surgeon on a troopship. He arrived in Russia in 1734. Leaving the army, he worked as the physician to a Russian archbishop.

Still in Russia, in 1737 Steller married Brigitta Messerschmidt, the widow of Daniel Gottleib Messerschmidt, the naturalist and geographer known for his work on Siberian flora. Steller admired Messerschmidt’s detailed notes and journal, and began using the same techniques in his own observations. The marriage foundered as Steller’s work took him away from home.

In 1740 Steller joined Captain Vitus Bering’s Second Kamchatka Expedition, serving as the shipboard naturalist. In Russian service the legendary Danish cartographer and explorer’s name would be given to the Bering Strait, the Bering Sea, Bering Island, the Bering Glacier and the Bering Land Bridge.

Bering’s expedition mapped the Arctic coast of Siberia and some of the North American coastline, reducing previously blank areas of the world map. And although the dream of a Northeast Passage to Asia and its riches was finally put to rest, the expedition discovered wealth of another sort. The sea otter pelts collected were judged to be the finest in the world and would result in the Russian settlement of Alaska.

The two-ship expedition first explored Russia’s vast Kamchatka Peninsula, where Steller helped organize a school. The expedition then began searching for a strait between Russia and North America, with the hope of reaching American shores.

In 1741, after storms and separations, the ships reached Kayak Island, less than one mile off southeastern Alaska. While the crew searched for water, Steller documented flora and fauna, becoming the first European to set foot in Alaska and the first scientist to describe a number of North American plants and animals, including his namesake sea lion and jay.

The expedition left Alaska for the Aleutian Islands. One ship returned to Russia to report the expedition’s findings; Bering’s ship, with Steller aboard, continued exploring. By this time the crew was suffering from scurvy, which Steller treated with wild berries and grasses. The ship, battered by a storm, wrecked on what would become known as Bering Island. Bering and nearly half the crew died; the surviving men, including Steller, lived on otter meat.

Despite the hardships, Steller studied the island’s flora and fauna, including an immense sea cow, a sirenian relative of the dugong and manatee. He described, sketched and dissected a sea cow, now thought to be a remnant of an Ice Age population that formerly roamed across the Northern Pacific.  He reported that the sea cow did not taste very good.

After overwintering on the island, the stranded crew salvaged enough materials from the wreckage to construct a smaller vessel. In 1742 the survivors returned to Kamchatka to report their discoveries. Steller spent the next two years observing and describing the peninsula’s flora and fauna.

But trouble was brewing for the multi-tasking scientist, physician and explorer. Because of his empathy for the indigenous peoples of Kamchatka, Russian authorities charged him with encouraging rebellion. Steller was summoned to St. Petersburg and was briefly arrested. Financially and physically strained from court appearances, Steller died of a fever in 1746 as he was traveling overland from Siberia to St. Petersburg. He was just 37 years old.

A book of his scientific observations, On the Beasts of the Sea, was published posthumously in 1751. It included observations of numerous Arctic species that had not previously been documented or studied, including sea lions, sea otters and fur seals (at the time called sea bears). He also reported an animal that has never been observed by others, the Steller’s sea ape. (See sidebar.)

Of the six species Steller described, two are now extinct, the Steller sea cow and the spectacled cormorant. Less than 30 years after contact with Europeans the slow-moving, kelp-eating sea cow, which reached lengths of 20 feet or more, became extinct, hunted for its meat, fat and hide. Three species are in danger or decline: the Steller sea lion, Steller’s sea eagle and Steller’s eider, a member of the duck family. Steller also described the northern fur seal and the sea otter, both of which were decimated by the fur trade. The Steller’s jay is the only animal bearing the scientist’s name that is not currently in decline. (A chiton bearing his Latinate name has not been evaluated.)

Had he lived, Steller likely would have been appalled to learn the fate of the sea cow and of the ravages inflicted by humans on otters, seals and sea lions. He was a compassionate man who abhorred violence to animals. While shipwrecked on Bering Island foxes plagued the survivors by raiding meager camp stores. Steller objected to the torture sailors inflicted on the foxes.

After his death, Steller’s journals were used by other explorers of the North Pacific, including Captain James Cook, who was searching for an oceanic passage around North America.

In Anchorage, Alaska, Steller Secondary School honors the naturalist, who is considered to be a pioneer of Alaskan natural history. In 2009, a memorial to Steller was erected at a riverside park in Tyuman, Siberia, the settlement where he died. In Bad Winsheim, Germany, near his birthplace, a sculpture of a sea cow honors Steller’s discoveries.

No known portrait of Steller painted from life exists, but his name and legacy live on, at least as long as the animals named for him survive into the future.

Fort Ross is the former Russian hub of the southernmost Russian settlements in North America, from 1812 to 1842. The settlements were primarily involved in the fur trade, especially otter pelts.

Fort Ross is a historic Russian compound and present-day museum. It is one of the main tourist attractions between Bodega Bay and Fort Bragg. It is located 11 miles north of Jenner on California Highway 1. It is about a two-hour drive from San Francisco.

The visitor center and fort compound are open every day, 10 am to 4:30 pm. The park grounds are open sunrise to sunset. There is ample parking and ADA-accessible trails. The day use fee is $8 per car. Tours are available in English and Russian.

Lodges, restaurants, campgrounds and small markets are scattered along this scenic stretch of Highway 1.

If you visit Fort Ross, be sure to hike the trail to Sea Lion Rocks, where Steller sea lions can often be seen sunning themselves. fortross.org/info.htm

The Mystery of Steller’s Sea Ape

It had the head of a dog, bristly whiskers like a human mustache and the tail of a shark. It was about five feet long but had no forelimbs or fins. Its body was covered in thick gray hair but the abdomen was reddish-white.

On August 10, 1741, during the Second Kamchatka Expedition, shipboard naturalist Georg Steller reported that he spent two hours observing an unknown sea creature from a distance of 16 feet, in the waters of the Shumagin Islands, Alaska.

According to Steller, the creature raised its head and shoulders out of the water for several minutes to observe the ship and playfully juggled a piece of seaweed.

Steller said the creature resembled Simnia marina, or sea ape, an animal illustrated by Swiss physician, naturalist and bibliographer Conrad Gessner (1516-1565). Steller’s sighting is the only known observation and has not been corroborated by physical evidence or other reputable witnesses.

The encounter was not recorded in the ship’s log, nor did Steller mention it in his government report of 1742, nor in his book, Beasts of the Sea. The encounter was noted in his travel diary, which was published posthumously as Journal of a Voyage with Bering, 1741-1742.

Steller’s biographer, Dean Littlepage, believes the most likely explanation for the sighting is that the naturalist encountered a young fur seal, perhaps in poor light. Or maybe it was a leopard seal or Hawaiian monk seal.

There is another possible explanation: Steller had a sense of humor. He dubbed the creature Simnia marina danica, Danish sea ape. According to ecologist Andrew Thaler, the young naturalist had a contentious relationship with the older expedition commander, Vitus Bering. Bering sported a bristly mustache and was the only Dane on the ship.

Perhaps this is why Steller omitted any mention of the Danish sea ape in his official reports.

Below are the animals that Steller collected or described that were later named for him. Plants and a mineral also include the name Steller.

Range: From the Kuril Islands and Sea of Okhost in Russia to the Gulf of Alaska in the north, to Año Nuevo Island off central California. They formerly bred as far south as the Channel Islands, but have not been spotted there since the 1980s.

Range: The eastern coast of northern Russia and Hokkaido, Japan. Vagrants have been found in North America and as far inland as Beijing and south as Taiwan.

Range: At the time of discovery, the range was limited to shallow seas around the Commander Islands.

Range: The Bering Sea, Northern Scandinavia and the Baltic Sea.

Range: The mollusk is found on the shores of the Northern Pacific from central California to Alaska, across the Aleutian Islands to the Kamchatka Peninsula and Japan.