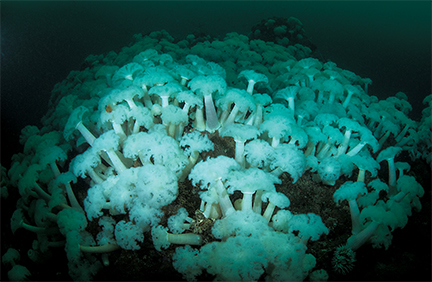 A Perfect Day in Monterey: Enjoying the “BB” Pinnacle

By Bruce WatkinsJune 27, 2019No Comments 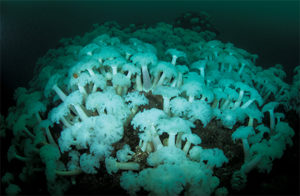 Entry and Exit: Boat dive only

Hunting: The high point is just outside of the Pacific Grove Gardens State Marine Conservation Area where only finfish may be taken. It is so close to the boundary of the reserve, and such a special site, that I strongly suggest not taking any game here.

May proved to be both a trickster and provider of great joy for me. During the first part of the month I was tempted to dive Monterey by the numerous reports of fantastic conditions, but my schedule wouldn’t allow it. At least one weekend was spent attending Scuba Show, so I can’t complain too much as I had a blast at the event. Fortunately for me favorable conditions held out and the ocean provided a couple of epic dives.

The following week the weather forecasters called for overcast skies, with perhaps a bit of rain and flat seas. When we arrived, we were indeed treated to flat seas, but also to sunny skies and no rain in sight. Just goes to show you should not always trust the weather guy, and check things out for yourself. As Bob Dylan said, “You don’t need a weatherman to tell you which way the wind blows.”

I boarded the Beachhopper II on a Friday charter, and found out that because a few of the other divers had canceled at the last minute my buddy and I had the boat to ourselves. Sweet! Our first dive was at Ball-Buster, a massive pinnacle about 2/3-mile off the Coral Street entry. Some say this site got its name after the large number of lead balls found here — artifacts from commercial fishing gear that got snagged on the rock. Others claim an infamous Monterey diver named it after his ex-wife. Perhaps both are true.

This is a relatively small site, about 30 by 50 yards. The top of the pinnacle begins at about 70 feet. In some areas the pinnacle drops off steeply in a nearly sheer, but deeply cracked, rock face. In other areas the rock drops away in a series of giant steps to over 100 feet.

As we descended the anchor line, we were greeted with nearly 70 feet of visibility and the pinnacle glowed white due to the large number of metridium anemones. Often in Monterey you can only see part of the reef at one time due to the sometimes-limited visibility. However, when the ocean gives up great vis, divers can clearly see the great expanse of the reef. On days like this Monterey puts tropical reefs to shame.

The shallow area at Ball-Buster is covered with a thick carpet of red strawberry anemones. Among the anemones are an assortment of barnacles, nudibranchs and stony corals. There were an unusually large number of rock scallops in plain view, due to lack of hunters on this site. Thick schools of blue rockfish circle the site, and other species of rockfish and surfperch were found resting on the rock or hiding back in crevices.

A bit deeper the walls are covered in a thick blanket of fluffy-white metridium anemones. These anemones are stunningly beautiful and completely cover much the rock face. Metridiums are carnivores and feed on zooplankton that the currents bring by. They only grow in areas where currents are commonplace. They are one of the few anemones in our waters that only reproduce sexually; thus, every anemone you see is genetically unique. Most other anemones you see (e.g. strawberry) reproduce both sexually and asexually (by budding) and colonies are genetically identical.

On the southwest side of the pinnacle is a deep vertical crack partially blocked by a large boulder. The bottom of the crack is about ten feet above the base of the pinnacle. Everyone who dives this site should check out this crack, as there is almost always something interesting to find here. Sometimes there will be a giant Pacific octopus; at other times you might find a wolf eel. On this dive the crack was home to a few rockfish.

The deep water at the base of the pinnacle is a wonderful place to find unusual critters. On the southeast side and maybe 20 feet from the main rock, is a patch of red gorgonians. Gorgonians are quite rare in Monterey Bay at recreational diving depths, so these are a real treat. Even more of a treat are the colorful critters that feed on the gorgonians. Look for simnia shells, festive tritons, and slender shrimp on the gorgonians. These critters are normally found when the polyps are retracted, since many of these feed on polyps and gorgonians protect themselves by retracting their polyps.

Ball-Buster is an advanced dive due to the depth, currents, and there is no shallow area to end your dive. Divers should be able to navigate back to and up the anchor line. Having said that this is a fantastic dive for experienced divers.