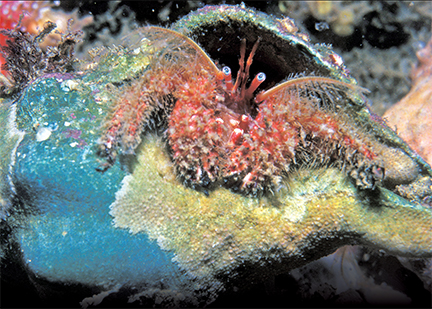 If the Shell Fits: The Curious Habits of Hermit Crabs 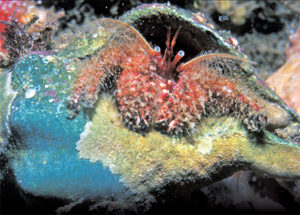 While riding an Amtrak train along the coast just south of Santa Barbara I had an epiphany. It was sparked by the neatly parked RVs on the two-lane road along the shore below the train tracks. Are you ready? Here it is: Hermit crabs are the RVers of the crab world.

Of course, human RVers can live independently of their vehicles while hermit crabs require a sea shell home for protection because only their heads, part of their carapace and the first three pairs of legs are protected by a hard exoskeleton.

Crabs belong to the phylum Arthropoda, which means jointed leg and includes not only aquatic creatures but many terrestrial ones, such as spiders, scorpions, centipedes and millipedes. The subphylum Crustacea includes crabs, lobsters, shrimps, barnacles, amphipods and isopods. Some isopods and a few species of crabs are the only crustaceans that live on land.

All crustaceans must molt in order to grow and that process includes the regeneration of missing parts such as legs or antennae.

Most crustaceans have four or more pairs of limbs. Since crabs have five pairs they are classified as decapod crustaceans. They belong to one of two infraorders: Brachyura (Greek for short tail) or Anomura (differently-tailed – the members can have any of many different tails). Hermit crabs are not true crabs (brachyurans) they are anomurans, which also includes Alaskan king crabs. There are about 1,170 species of hermit crabs worldwide and most are marine.

As is often the case with the articles I write on marine life, surprising facts are discovered when I’m doing research (at least they surprise me). Did you know, for instance, that hermit crabs can be right or left handed? The three furry hermit crabs shown here, members of the Diogenidae family, are either left handed, (i.e., the left claw is bigger than the right) or have claws of equal size. Members of the Paguridae family, however, are right handed (the right claw is much bigger than the left). The super size of the largest claw is most apparent in the photo of the broadhand hermit, which also shows why this is such an advantage. Not only is the claw an awesome defensive weapon, it can be used to “guard the door” of the crab’s sea shell home, keeping predators such as other crabs, octopus and fish out.

A hermit’s largest claw is also used to hold food, which can be almost anything since hermits are omnivorous scavengers. The smaller claw moves food to the mouth and, in males, holds onto the shell of a female until she is ready to molt, which must happen before she can mate and which can take days. Besides the pair of legs with claws, hermits have two pairs of walking legs. The final two pairs of legs are quite small and used to position the lower body and hold onto the shell home.

Hermit crabs can move forward, backward or sideways. Those living on a sandy bottom in lightweight shells can lift them up and scuttle off at amazing speeds. Larger hermits with heavier shells don’t need speed; they can simply retreat inside their shells.

A pair of eyes on the ends of stalks provides hermits with excellent vision. While all of those pictured here have blue eyes, hermits may have any of a variety of eye colors. There are two pairs of antennae. The outermost of some, including the furry hermit crab, are feathery and filter food from the water. The two much shorter, innermost antennae are olfactory organs, constantly flicking up and down as they monitor the water for odors/chemicals that can alert the hermit to danger, that a female is ready for breeding, or that a snail is dead or dying and a new shell may soon be available.

Hermits are always looking for new shells because they outgrow the old ones and/or the shells become fouled with marine life or damaged. While shell fit determines growth, many live in shells that are too small because they can’t find one that is the right size. Many species prefer the shells of a particular snail. I found a YouTube video (not shot in our waters) demonstrating what happens when a horse conch begins devouring the original inhabitant of a tulip shell, releasing odors in the water that draw a crowd of hermits. There are dustups as some try to intimidate others into fleeing, though they don’t appear to be very violent. Near the end, one particularly daring hermit climbs onto the horse conch’s foot and, taking a chance that the conch might also eat it, inserts its tail into the empty shell and slips inside. A few seconds later, this brave (or possibly foolhardy) act is rewarded as the hermit and its new home are dropped on the sand. The plucky crab speeds off.

Hermits are known to gather in groups to exchange shells although those in perfect shells run away from exchange sites. And, after changing shells, all hermits run away because they need to determine if the new shell fits, which can take up to 30 minutes. Hermits communicate with one another to trade shells — one crab can speak as many as three languages for trading — with same species and different species.

Female hermits brood their eggs on pleopods on their abdomens inside their shell homes after the eggs are fertilized by transfer of sperm from a male. When the eggs hatch, the larvae are expelled into the water. They look nothing like their parents and drift with the currents, molting several times as they slowly morph into juveniles. Their first home is a tiny shell.

We have photographs of three hermit crabs species here and three images of the furry hermit (Paguristes ulreyi), including two different adults and a juvenile.

Furry hermit (Paguristes ulreyi): The hermit in Photo 1 is bright red while that in Photo 2 is reddish-brown. Housed in Kellet’s whelk shells, both live up to their names and are exceedingly furry. Their shell homes are covered with marine life, which serves as camouflage, allowing the shell to blend in with the terrain. Hermits are known to decorate their homes and in other areas of the Pacific and in the Sea of Cortez some place anemones on them. The left claw of the animal in Photo 2 is significantly larger than its right claw. The hermit in Photo 3 is a tiny juvenile, living in a California cone shell that’s only about three-quarters of an inch long.

The feathery outer antennae are distinguishing features of the furry hermit, which can grow to be 1.3 inches long. It lives from intertidal waters to depths of more than 500 feet. It ranges from Monterey to the Gulf of California and Dr. Jensen says it is the Paguristes most often encountered off the West Coast.

Bluemouth hermit (Haigiopagurus diegensis): The blue on the mouthparts and short antennae makes this species, the only one of its genus, easy to identify. Its shell is so well camouflaged, however, that I can’t say with certainty what it is. This hermit can be half an inch long. It is found from Santa Cruz Island to Guadalupe Island, Mexico, in 10 to 60 foot depths.

Broadhand hermit (Phimochirus californiensis): The broadhand pictured here is living in a murex shell. The right claw is considerably larger than the left, which marks it as a member of the Paguridae family. This claw will completely cover the opening of the shell when the crab is inside. The crab can be an inch long. It ranges from Santa Catalina Island to the Galapagos and from intertidal waters to depths of 396 feet.

The author wishes to thank Gregory C. Jensen, Ph.D., author of the new book, Crabs and Shrimps of the Pacific Coast: A Guide to Shallow-water Decapods from Southeastern Alaska to the Mexican Border (www.molamarine.com), for his help in the preparation of this article. Information was also provided by Dan Rittschof, Ph.D., of Duke Marine Lab (my brother).