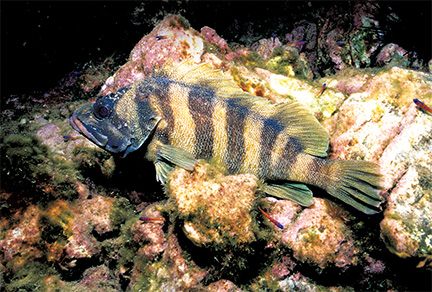 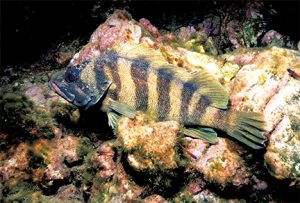 Of the some 102 rockfish species worldwide, about 60 live in the ocean off the SoCal coast. Some are closely related and look very much alike. Colors of the same species can vary and at least some of the fish are chameleon-like, changing color to match their surroundings. Additionally, rockfishes are evolving and forming new species at what Dr. Milton Love calls “a frightening rate.” Is it any wonder many of them are a challenge to identify?

The rockfish genus name, Sebastes, means “magnificent” and the bodies of some but not all of these fish feature interesting patterns and bright colors. The treefish (Sebastes serriceps) is a good example. When encountered in its typical coloration, this is one of the easiest SoCal rockfishes to identify. Its zebra-reminiscent stripes make it unique. The yellow body has five to six vertical bars (black, brown or dark green) and the fish’s lips are red, pink or orange. Of course, since it is a rockfish, there is a caveat: on occasion, Dr. Love says, the fish “are simply strewn with tiny light dots.”

But the caveats don’t end here. Although no rockfish juvenile looks exactly like its parents, the shy, pretty juvenile treefish has less of a resemblance to theirs. While the baby is bright yellow with black bars and markings its oversized, fluttery fins are trimmed in white or blue. Many newbie divers think it is a tropical fish gone astray.

The treefish species name, serriceps, means “saw head” in Latin and when the head fin is raised, it does indeed resemble the teeth of a saw. Where the common name originated is unknown, though it has been used since the late 19th century. Treefish are most active in the evening. They eat crustaceans, octopuses, squid and other fish. They are often found in crevices and small caverns or partially hiding behind rocks. This is one rockfish that doesn’t stand its ground when approached by divers and in almost all of my photos it is leaving or about to leave the scene. According to Dr. Love, treefish can be very territorial — but often aren’t.

Treefish can be a maximum of 16 inches long and weigh more than four pounds. They can live 25 years. They are common from SoCal to Baja in waters from 20 to 100 feet deep and are most closely related to flag, tiger and redbanded rockfishes.

Even though they are not closely related, if you were just looking at coloration, you might mistake a black and yellow rockfish (Sebastes chrysomelas) for a treefish. True to its species name, chrysomelas, which comes from two Greek words for “gold” and “black,” this fish is usually yellow and black, though the black is sometimes olive.

Also pictured here is either a black and yellow rockfish or a hybrid fish that is the offspring of a black and yellow that mated with another rockfish species. Although it has some of the coloration of a treefish, the gray lips are a dead give away that it isn’t.

When conditions are ideal, rockfishes can be very long lived. Age is ascertained by counting growth increments on the fishes’ otoliths, which is similar to counting the rings on a tree. The earbones of one rockfish revealed it was more than 200 years old. The larger the species, the longer its life. Treefish can live 25 years, black and yellows to 30. The larger the female, the more young she produces.

Rockfish fertilization is internal. Some species may mate with more than one male. The eggs grow inside the mother and when they hatch, the larvae are expelled into the water, where they drift with the currents before morphing into juveniles.

If you’ve got a few years of diving under your weight belt you’ve probably noticed there aren’t as many rockfishes around as there used to be. California rockfish populations have been declining for years. If marine protected areas (MPAs) work as hoped, perhaps they will rebound, though that will likely take decades.

The author wishes to thank Milton Love for his help in the preparation of this article. Dr. Love, Mary Yoklavich and Lyman Thorsteinson are the authors of The Rockfishes of the Northeast Pacific.