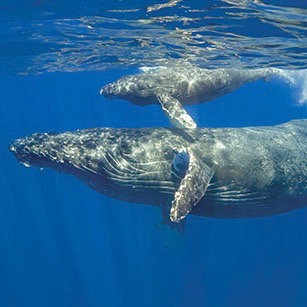 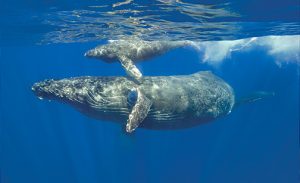 Humpback whales commonly grow to a length of close to 50 feet, and by the time they are adults, they weigh roughly one ton per foot of body length. Yet with as few as three beats of its tail an adult humpback is able to launch itself almost completely out of the water in a behavior known as breaching. It is difficult to comprehend how powerful and well adapted for life in the oceans humpbacks must be to accomplish this feat. Yet, if you ask anyone who has spent time observing humpbacks, they will almost certainly tell you that the real power of these magnificent creatures is their ability to capture the hearts and minds of so many people. This phenomenon is experienced by ocean goers that are lucky enough to enjoy a sighting, something that happens relatively often in California, Hawaii, Mexico’s Sea of Cortez and Revillagigedo archipelago, and numerous other locales.

Their Place in the World of Whales

Worldwide, there are approximately 80 species of whales. With regard to their classification, these marine mammals are described in the order Cetacea, a group that is divided into two suborders; Odontoceti, the toothed whales, and Mysticeti, the baleen, or filter feeding, whales.

Like other baleen whales, humpbacks only have teeth during their embryonic stage. As adults, they are equipped with as many as 400 baleen plates.

Mature humpbacks typically range in length from 35 to 48 feet, with the average full-grown female being slightly longer than the average male. The most easily seen distinguishing feature of both sexes is their long pectoral flippers. These fins grow to 15 feet in length, making them close to one-third the length of the bodies of the adults.

The significance of their long pectoral fins as an identifying characteristic is reflected in their taxonomic name, Megaptera novaeangliae. The genus name is derived from the Greek words mega meaning giant and ptera meaning wing, an obvious reference to their long pectoral flippers. The species name, novaeangliae, is a Latin derivation from French words meaning New England. The humpback population in the waters off New England was well known to Europeans by the mid-1750s.

The body of a humpback whale is generally stocky with a smallish, somewhat knobby dorsal fin that varies in shape. While calves exhibit noticeably lighter hues, the bodies of adults are typically dark gray to bluish black. However, individual animals have widely varying amounts of white on their pectoral flippers and underbelly. The individual variations are so distinctive that markings on the underside of the tail flukes can be used to identify individuals in the same way that fingerprints can be used to identify humans.

Their broad head looks somewhat rounded when viewed from above, but unless the throat pleats have been expanded, the head of these behemoths have a surprisingly slim profile. Wart-like bumps called tubercles that are enlarged hair follicles are present on both the upper and lower jaw.

Like other rorqual whales, humpbacks are equipped with 25 to 50 expandable pleats on the underside of the throat. The pleats allow the whales to greatly enlarge their throat in accordion-like fashion when feeding. Mature males also expand their the throat to make themselves appear bigger when they compete with each other, and when trying to woo females. Females likely look with favor upon larger males, as size can be an indication of fitness, and therefore, reflects the worthiness of a male as a potential mate.

Humpbacks, like all mammals, breathe air. The air is drawn in and expelled through openings known as blowholes located on the top of the head. Like all filter feeding whales, humpbacks posses a pair of blowholes. All toothed whales have a single blowhole.

The reproductive organs of both sexes are internal. Females can be distinguished from males by noting the presence of a “bump”” called the “hemispherical lobe” located on the underside of the body between the umbilicus, the area on the body where the umbilical cord was attached, and the anus. The female’s mammary slits are found just forward of the hemispherical lobe.

Humpbacks inhabit all of the world’s major oceans, although they are not known in the eastern Mediterranean or the Baltic Sea. Worldwide there are four distinct major populations. They are the North Atlantic, North Pacific, Southern Oceans, and Indian Ocean populations.

DNA studies have revealed that these populations do not interbreed, nor have they for thousands of years. However, the separated populations share many common traits and behaviors including similar migration patterns, with the exception of the Indian Ocean population. Indian Ocean humpbacks are unable to migrate due to the large landmass that forms the northern coastline of the Indian Ocean.

Much of the life of a humpback whale is governed by their seasonal migration. The annual roundtrip migration of some individuals covers more than 11,000 miles, making their trek the longest mammal migration known to science. One female was documented to make the approximately 3,000 mile long journey from Alaska to Hawaii in only 30 days, but most whales in that population take almost twice that long to cover the same route.

During the summer months of the hemisphere they live in, humpbacks spend the majority of their time and energy feeding in cold temperate and sub-polar waters in an effort to store up fat reserves that they will live on during winter. Individual whales consume as much as 9,000 pounds of food per day.

These cetaceans feed by opening their cavernous mouths and gulping large amounts of prey and water. Then, they use their tongue to force the water out of their mouth between the baleen plates. The outer edge of each baleen plate is smooth while the inner edge has a frayed “hairy-looking” fringe that acts like a sieve.

While the whales routinely feed by themselves, they also sometimes use a group feeding technique known as “bubble netting” that is unique to humpbacks. When bubble netting, humpbacks use clouds of rising air bubbles exhaled from their blowholes to confuse and corral schools of small fish at or near the surface before the whales rapidly ascend and swallow what they can.

In early fall the whales begin their migration to their wintering grounds where adults are believed to mate and pregnant females bear their young. Approximately 60 percent of the humpbacks in the northern hemisphere migrate to Hawaiian waters during the winter. Others travel to Mexico’s Sea of Cortez and the Revillagigedo Islands, some 220 to 400 miles south of Mexico’s Baja peninsula. Another group migrates to the waters of the Silver Bank near the Dominican Republic.

In all of these destinations, humpbacks exhibit a variety of behaviors ranging from breaching, spyhopping, pectoral slapping, tail slapping, fluking up, peduncle throws (aka tail lobbing), competition runs, chin lunging, playful calves mimicking the behaviors seen in adults, and more.

Humpbacks are polygynous, meaning that mating males routinely try to have more than one partner. Males are highly competitive with each other, and physical force is commonly used to gain the upper hand and access to a mate in competition groups as gatherings of males pursue a single female. Males often display aggressively as they breach, throw their tails forcefully toward other males in an act called a peduncle throw, inflate their throats to make themselves appear as large as possible, and slam into one another.

At other times the males woo females by hanging head down in the water column as they sing their song of the year in an effort to persuade a mate that he is the best choice to father her calf. All males in a given population sing the same song even though the song changes every year. While the songs are complex, some specialists believe the males that can sing the loudest for the longest period of time are considered to be the most worthy mates. Researchers believe the singing can be heard by other whales over a distance of at least 100 miles. Not surprisingly, it is not uncommon for divers and snorkelers to clearly hear their magical melodies.

Copulation is internal. Mature females have one calf every two to three years. The gestation period lasts for 11 months. At birth calves are an astonishing 13 to 16 feet long and weigh in the neighborhood of 2,000 pounds. They nurse on the rich milk from their mother for the first five to seven months of their lives. By the time they are weaned the youngsters usually double their length and weigh in the neighborhood of ten tons. Calves remain with their mother for as long as one year.

Humpbacks reach sexual maturity when they attain a length of close to 35 feet. Females are usually five or six years old, and it takes males a few more years to attain this length. Researchers generally believe that females do not calve until they are at least 10 years old. The life span of a humpback whale is estimated to be between 30 and 40 years.

It is one thing to know the facts and something else all together to see a humpback in the wild whether underwater or topside. One encounter, no matter how brief, and your heart will likely be theirs forever!

A humpback mother and calf are often accompanied by a third whale known as an escort. Until recently it was believed that the escort was always a male, but new evidence indicates that some escorts might be females. It is generally accepted that if the escort is a male that he is waiting for an opportunity to mate with the mother. A male escort will often try to discourage other males from approaching the female.

Specialists are not certain what the role of a female escort is, but humpbacks are social creatures. Perhaps safety in numbers plays a role as an escort can help to protect a calf from tiger sharks and other potential predators.