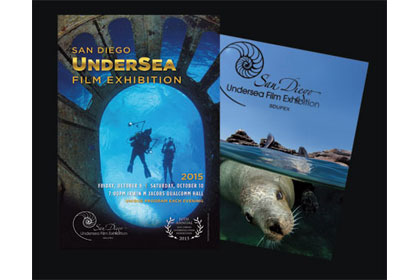 By Mary Lynn PriceOctober 7, 2015No Comments

October 9th and 10th mark the upcoming 16th Annual San Diego UnderSea Film Exhibition (SDUFEX). The two-night event will feature around 30 of the best underwater short films submitted this year, and will be emceed by renowned underwater imager and author Marty Snyderman. Short film entries from many well-known underwater imagers such as Bob Cranston, Eric Hanauer, Simon Spear and many others will grace this year’s exciting line-up.

The history of SDUFEX reflects in many ways the history of the digital video revolution. In 2000 the first small digital camcorders were just coming on the market. At about this same time, digital video editing programs were making their way onto personal computers allowing filmmakers to easily edit their digital footage.
Back in 2000 as part of a dive club associated with Chuck Nicklin’s historic Diving Locker, there were a handful of videographers very interested in learning more about video and sharing tips and approaches. The group would meet monthly at the Diving Locker to share videos. Out of that group, a small handful of highly motivated video shooters with Chuck’s enthusiastic encouragement made a decision to start an underwater film festival, the San Diego UnderSea Film Exhibition (SDUFEX). Chuck Nicklin, Mary Lynn Price, Bob Gladden, and Steve Douglas dug into their pockets and came up with enough money to rent the Otto Theater at the San Diego Zoo for one night. The event was an overwhelming success. This film exhibition effort continues to this day as a 501(c)(3) non-profit organization, and is considered one of the most prestigious underwater film festivals in the country. It has kept to its original philosophy of no entry fees, no prizes (except a coffee cup), affordable tickets, and the honor of having films selected and shared with a very appreciative audience in a beautiful large screen venue.
It’s an event not to be missed where guests can visit with old friends and meet new ones, in between watching the screening of so many unique and fascinating underwater short films in the beautiful, state-of-the-art large screen theater, the Irwin M. Jacobs Qualcomm Hall on the Qualcomm campus in San Diego’s Sorrento Valley. Tickets can be purchased online, and more information about the exhibition is available on the organization’s website at SDUFEX.com. Tickets are also available at Ocean Enterprises dive shop in San Diego. The event often sells out, so get tickets while they’re still available!