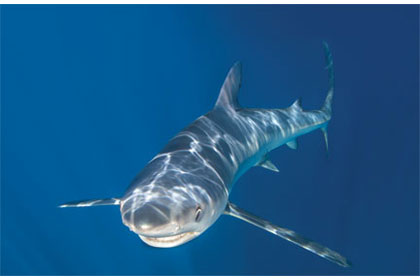 It’s Good to Have the Blues

By Marty SnydermanOctober 20, 2015No Comments

In California we are fortunate to have a variety of sharks that inhabit our coastal waters. It is the blue shark, Prionace glauca, a species that lives in the waters of the open sea that I want to comment on here. Graceful swimmers, blues are sleek, slender and nothing short of absolutely stunning especially when sighted on sunny days in relatively clear, shallow water. In that setting the brilliance of their shimmering indigo coloration is mesmerizing.

Given their stunningly handsome appearance, it is not surprising that blue sharks have been a favorite subject for many underwater still photographers and videographers over the years. For several decades a number of dive operators from the central and southern part of the state have run trips that specifically targeted open ocean sharks with blues being a feature attraction.
While I encourage any diver that is interested in seeing sharks and exploring the open sea to join one of the shark diving expeditions that target blue sharks, it is the modern history of blue sharks in California waters that I want to focus on here. In many respects blue sharks have served as the proverbial canary in the coal mine in our local waters.
As recently as the early 1990s divers in southern California had a good chance of seeing blue sharks in the summer and fall in the open sea off southern California if they used the right bait and had favorable conditions. In that time period it was common to attract a dozen blue sharks on a good day.
A dozen might sound like an indicator of a healthy population, but those of us that had been paying attention to blue shark counts off our coast had been concerned about the decline in the number of blue sharks for the previous decade or so. Only 15 years earlier it was not uncommon to attract 100 or more blue sharks over the course of a day with several dozen being seven to nine feet long. But slowly and steadily their numbers and sizes were in obvious decline. Open ocean longline fishing and other commercial practices were the primary causes even though blue sharks have little to no value as food for human consumption.
For at least a decade starting in the mid 1990s, things looked bleak for blue sharks in California waters. Blues are highly migratory and there is no way to protect them simply by trying to protect them in local waters.
The good news is that in recent years the blue shark count seems to have slowly increased. Over the past several years several southern California operators have had enough sightings on a consistent basis that they can feel good about running trips that target encounters with blue sharks. That is certainly encouraging. But we dare not get complacent.
In a speech to the general assembly of the International Union for Conservation of Nature, environmentalist Baba Dioum once said, “In the end, we will conserve only what we love, we will love only what we understand, and we will understand only what we are taught.” This is precisely why I encourage you to read this month’s Marine Life column by Bonnie J. Cardone, “Blues Cruise: Diving With Blue Sharks.” Blue sharks need our help, and we need to remember that healthy oceans need blue sharks.