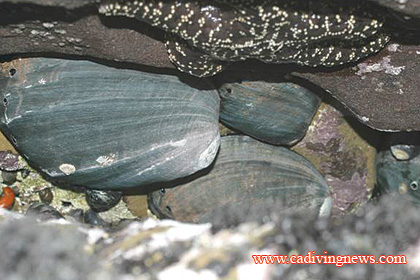 By California Diving NewsMarch 11, 2009No Comments

NOAA’s Fisheries Service today determined black abalone, an edible marine mollusk, should be listed as endangered under the Endangered Species Act. The ruling took effect on February 13, and comes one year after the fisheries service proposed to list the species.

Once harvested for food, black abalone were plentiful in intertidal waters along the Pacific coast. The species was harvested early in California’s history by native Americans and peaked as a commercial fishery in the state in the 1970s. The state of California closed commercial and recreational harvesting of black abalone in 1993.

Since the 1980s, black abalone abundance has plummeted primarily from a bacterial disease known as withering syndrome. The spread of the disease may have been exacerbated by warmer coastal waters caused by factors such as long and short-term changes in climate or from the warm water effluent of power plants. Other factors that may have led to the rapid population decline are historical overfishing and poaching.

Coupled with the listing decision, NOAA’s Fisheries Service is also soliciting comments and information relevant to the designation of critical habitat for black abalone.