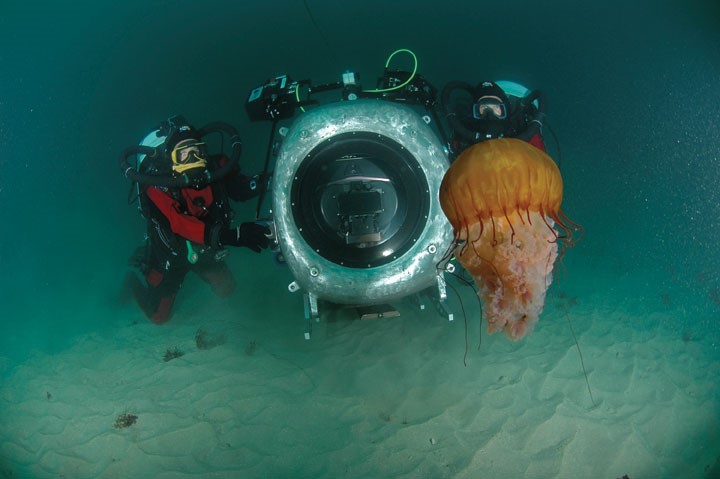 The California diving community lost one of its greats recently, when on June 2, 2016, underwater cinematographer Bob Cranston died.

He is remembered both for his cinematic achievements and as a pioneering shark diver. 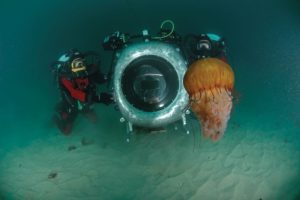 It was the winter of 1993 and the weather was clear and calm at Catalina Island. But there was some current running through our dive site.

Bob laughed and said, “Yeah, I think it’s doable.” When conditions were questionable, I always asked Bob’s advice. But Bob never said “No.” Sometimes though, he would just laugh and say nothing. I learned to interpret this as “No” or even as, “Are you out of your mind?” But he never said, “No.” He was simply incapable of having a negative opinion. On this crisp California morning, I took Bob’s advice and we prepared to dive.

Our crew began hoisting the 1,200-pound IMAX 3D housing over the side of the boat. The 65-pound tripod was already hanging 30 feet below on a down-line. Mark Thurlow would follow Bob and me and bring the tripod down on a lift bag. Mark Conlin would bring the 220-volt surface-powered cable lights.

As we neared the bottom at 70 feet, I watched the sand racing by and realized there was much more current on the bottom than on the surface. I looked at Bob and saw that his mask was leaking. He was laughing, which caused water to seep in around his eyes. Thurlow raced ahead of us and crash-landed the tripod in the sand, deploying the legs as quickly as possible. Then Bob and I swooped down on the tripod with the huge camera and struggled to insert the camera’s mounting plate into the tripod lock. Conlin fought to mount the lights. Amazingly, we managed to accomplish all this. But as soon as everything was assembled, the up-current leg of the heavy tripod began to lift, toppling the 1,200-pound camera. Soon the whole mess was rolling across the bottom in a tornado of sand and a bird’s nest of light cable. I looked at Bob and drew a hand across my throat to signal “abort.” Bob’s mask was now half full of water.

That evening, Bob, I, and the rest of our crew shared a beer on the boat’s sundeck. Each told his version of the story. We laughed until our throats hurt. It is moments like this that I will miss most, now that my friend is gone.

The IMAX film we were making became “Into the Deep,” the first underwater IMAX 3D film ever made. Bob helped design the massive IMAX 3D underwater housing. He designed and supervised the building of the underwater tripod. And he supervised the development of our cable movie light system. If I hadn’t known that I could rely upon Bob to accomplish the unlikely, or even the impossible, I doubt I would ever have had the courage to make that first IMAX film.

During the last thirty years, Bob and I made four other IMAX films together. Bob went on to become Director of Underwater Cinematography on many other television and IMAX productions including “Into the Arctic” where he captured incredible images beneath Arctic ice and of polar bears swimming underwater.

In the early 1980s Bob and I started a business that took people out into the open ocean to see and photograph blue sharks, mako sharks and whatever else swam by in the waters off the coast of southern California. While shark diving tours are routinely offered today, at the time, no other shark diving businesses existed in the states. I believe the only shark diving operation in the world was the great white shark expeditions led by Rodney Fox in Australia.

After a few years my filmmaking and photography career created too many scheduling conflicts, so I stepped aside. Bob continued to run the shark diving business for several years until his career as an underwater cameraman took off and he sold the business to Doc Anes. That is when the business became San Diego Shark Diving Expeditions.

Bob then went on to have a wonderful career as a cameraman. A lot of divers know about this part of Bob’s work because you saw it, and it was more high profile. But I am not so sure as many divers know about the pioneering role Bob played in creating and growing the shark diving world. His contributions to shark diving have given countless divers a lot of pleasure.

Bob Cranston wasn’t just my friend, or Howard Hall’s friend. He was a friend to the greater diving community. Bob made a lot of contributions to California diving and the diving world in general. He will be missed.