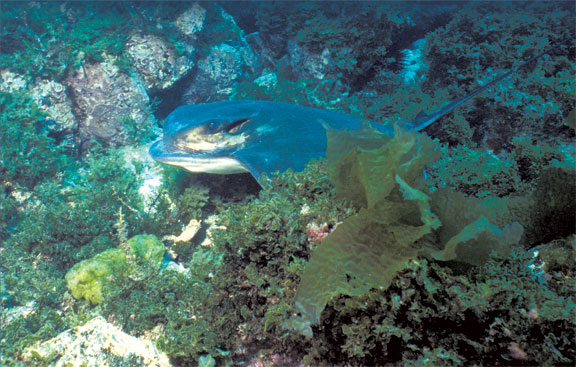 My success at photographing rays has hinged on chance. The ray(s) and I have been surprised to see each other and I somehow managed to take one or more photos before it (or they) departed. With the exception of Pacific electric rays, most of those departures were rather hasty. The electric rays, however, seem to be curious about divers and tend to stick around a bit. Sometimes, it is the divers who make a hasty retreat.

Bat rays are not fond of human company or even that of other rays except during mating season. They are most active at night and if you see one flying by during the day, it is probably fleeing another diver.

Bat rays are not aggressive and, in decades of diving, I have never heard of a diver being injured by one. Beach-goers wading in shallow water are more likely to accidentally step on a ray and get stung, although that is rare.

The stings are delivered by the one to three venomous spines that bat rays have at the base of their tails. The venom makes the stings excruciatingly painful and, if the symptoms are severe, medical attention may be needed.

Bat rays can be brown or black on top (most of those I’ve seen appear to be dark gray) and have white undersides. They can have a wingspan of six feet and are found from Oregon to Baja California, in waters as deep as 150 feet.

Rays are close cousins of sharks. While both are fishes, their skeletons are made of cartilage, not bone. Bat rays’ pectoral fins are broad and flat and used to swim in much the same way birds use their wings to fly. Bat rays’ tails are used for steering and balance.

The scientific name of the bat ray commonly found in California waters is Myliobatis californica. In his book, Probably More than You Want to Know About Fishes of the Pacific Coast, Dr. Milton Love points out that Myliobatis means “grinder ray” in Greek. The bat ray’s teeth are designed for grinding its food, which includes clams, crabs, shrimp, worms and snails, as well as fish. The ray uses its snout and “wings” to dig in sand or mud for its meals, leaving large depressions and the broken shells of its prey. It also leaves hexagonal-shaped teeth. Like sharks, when bat rays’ teeth wear out or break, they fall out and are replaced.

Bat ray fertilization is internal. The eggs develop in the female for as long as a year before hatching. The pups are born live, emerging tail first, with their wings wrapped around their bodies. To protect the mother, the stinging spines are flexible and covered with a sheath that drops off after birth. Litters consist of two to 10, 9- to 12-inch long pups that are miniature versions of their parents.

Many years ago I had an experience with an electric ray that was startling, to say the least. I was descending in midwater off San Clemente Island, when I received a powerful jolt that ran from my right hand to my shoulder. I had no idea what had happened and immediately began to ascend. That’s when I saw a ray just above me. After it swam off I floated on the surface for several minutes, processing what had happened. When I realized I had been shocked by an electric ray, not stung by a bat ray, I continued my dive. My arm tingled for quite a while.

I have no idea why the ray zapped me. Did I bump into it? The visibility was excellent but my attention was focused on the bottom. Electric rays are gray or bluish gray on top and can blend into the water. They are easiest to see from below because their undersides are white.

Big Pacific electric rays are capable of delivering an 80 volt shock (researchers have measured this). According to Reef Fish Identification: Florida, Caribbean, Bahamas, the Atlantic torpedo ray can deliver up to a 220 volt shock and the lesser electric ray, a 14 to 37 volt shock. Neither of these latter two rays is found in California waters.

The ability to shock is not primarily a defensive weapon, it simply allows electric rays to immobilize their prey so it can be eaten. Sharks and Rays of the Pacific Coast notes, “An electric ray’s energy sources are limited…. It uses up most of its shocking power with the first jolt and must rest and recharge after each attack.”

The scientific name for the Pacific electric ray is Torpedo californica and it is also known as the torpedo ray. Dr. Love points out: “torpedo is Greek for numbness.” According to A Living Bay, “The ray’s electric organs are in its greatly enlarged pectoral fins, and they occupy almost a quarter of the ray’s body mass.”

Pacific electric rays can be nearly five feet long and are found from British Columbia to Baja California, in depths from 10 to 900 feet. The creatures usually spend the day lying on the bottom, covered with sand. Instead of swimming by using their broad, flat pectoral fins like wings, electric rays move their tails from side to side.

I couldn’t believe my luck. I had just reached the bottom at 20 feet and was cruising toward the kelp forest in deeper water when I saw a prehistoric looking creature lounging on the sand. It was light brown, with a distinctive flat, heart shaped head and a long tail. There were three rows of spines on its back. The animal, which reminded me of an armored vehicle, was a thornback ray.

The creature tolerated having its photo taken for several minutes before moving on. (Yes, I know, paparazzi can be annoying!)

Thornbacks (Platyrhinoidis triseriata) are members of the Family Rhinobatidae, which includes guitarfish. The thornback’s genus name, Platyrhinoidis, comes from the Greek platys, meaning broad, and rhinos, meaning snout. The species name, triseriata, is Latin for three rows and refers to the parallel rows of “thorns” that run from the middle of the creature’s back to just before its tail. While not venomous, the sharp spines, which look like the thorns found on rose stems, make these fishes less appetizing to some predators, though they don’t seem to deter sharks and northern elephant seals. The long tail has two dorsal fins and ends with a paddle-like caudal fin.

Thornbacks only get to be about three feet long and most are smaller. They are thought to live about 15 years. Though these fish aren’t aggressive, they also aren’t afraid of divers. And while they aren’t rare, they are rarely seen by divers because they spend most of their time in water less than 25 feet deep, “…on the mud and sandy bottoms of bays, sloughs, and coastal beaches and around kelp forests,” according to David A. Ebert’s Sharks, Rays and Chimaeras of California. Several years ago a SoCal U/W photographer reported seeing thornbacks on night dives off Redondo Beach.

Two of the books I consulted for research on thornbacks pointed out they are considered living fossils and have remained almost unchanged for hundreds of millions of years. They are found mainly from Monterey Bay to Baja and are most populous off Southern California. Like bat rays, large numbers of thornbacks congregate in certain areas in the summer, most probably for mating and pupping. Fertilization is internal and takes place in late summer, with the pups born live a year later. The four-inch long pups are miniature replicas of their parents. While adults have white undersides, those of the babies are pink and white.

Thornbacks are nocturnal, lying partially buried in the sand or mud during the day. Besides small fish, they also eat worms, mollusks and crustaceans, which they dig up with their snouts. They have small, pebble-like teeth.

Although quite a few researchers have studied thornbacks, little is known about their habits.