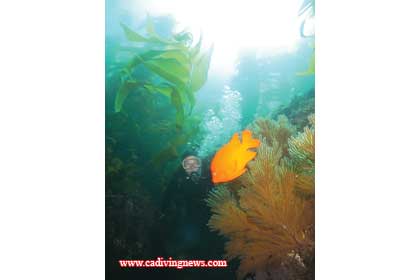 How to Photograph Gorgonian Sea Fans

By Dale ShecklerDecember 16, 2010No Comments

In Southern California waters we are blessed with temperate waters that encourage the growth of gorgonian sea fans. While they grow in branches that reach out from the reef, they are actually not a plant but rather a tightly grouped colony of tiny simple animals knows as polyps. The animals are a member of the Phylum Cnidaria animal group that also consists of anemones, jellies and corals. Much like their cousins they are very simple animals that consist of not much more than tentacles, a mouth and gullet — no nervous system, heart, or gills. They feed off current-born plankton using their tiny tentacles to sting and guide the microscopic food into their mouths. Because they feed from currents and surge, it is not unusual to see large fans and colonies of fans on current swept reefs with the flat side of their spread perpendicular to the water flow for maximum feeding efficiency.

The warm colors of the gorgonian sea fan are gained from a combination of the color of the stalks that are augmented by the color of the polyp animals themselves. The beautiful red gorgonian has red “branches” but white polyps, giving the fan a bright pink hue. Other just as noteworthy California gorgonians include golden, purple and brown. The fans vary in size from just a few inches to as much as three feet, depending on the species and location.
There are two main and best ways to photograph gorgonians — color contrasts and macro. Because of the warm colors of the gorgonian (pink, purple, and gold), a basic and dramatic photo is to contrast that warmth against the cool greens and blues of our California underwater seas. Set your exposure so that the background shows in all its green or blue glory, and then adjust your strobe to fill in the colors on the gorgonian. Shoot at a slightly upward angle to achieve the lighter background. Voila! You have a striking, albeit basic, underwater photo.
There are some elements you can add to this photo to make it even more striking. If you find a sea star or two at the base of a gorgonian, this will add interest to the picture. Get fish, sheephead and garibaldi are usually the easiest, to swim or even school in front of the gorgonian. This take a bit of behavior modification to the fish but it is easily done. Bang or grind rocks together to get the sheephead to move in. Flitting your hand also works to a degree. For garibaldi, use the old orange glove trick to get this territorial fish into position (it thinks your glove is another garibaldi). Avoid busting up urchins as this just puts a lot of debris in the water that can create backscatter in your photos.
And finally, you can add the element of another diver to the shot. Get your buddy behind looking at the gorgonian with wonder for indeed the color of this creature colony is striking. Combine all the elements into one shot, gorgonian, fish and diver, and you have an excellent photo.
Much of the previously mention photo techniques can be done with a normal, semi-wide or wide-angle lens set up. Get close to your subject and the small strobe on your camera may be enough for a good photo, but a supplemental strobe will make it a lot easier and better.
Macro for gorgonian is another technique all together. Ultra-macro will get you a look for the delicate individual polyps. A light background of blue or green can be dramatic, but you my lose detail of the polyps as they are often semi-translucent depending on the individual species. If you want to try this, shoot at an upward angle and adjust your exposure accordingly using the appropriately strobe power to illuminate the delicate branches and polyps. Black background photos can also be dramatic. Try both techniques.
Photography of the polyps is interesting and fun, but there is a small sea snail that will make it all that much more interesting, the simnia. Measuring just a centimeter or two, these tiny but beautiful creatures live almost exclusively on their food, the red gorgonian. They are very difficult to spot because of their small size and color that matches the red gorgonian. You will need a lot of patience to find them and just as much to fill your frame.
Gorgonians are a colorful and easy subject for beginning underwater photographers. Success is easily achieved. But even advanced underwater photographers can find challenges by combining other elements of California’s underwater realm and by taking a very close look at these simple but very interesting underwater animals.