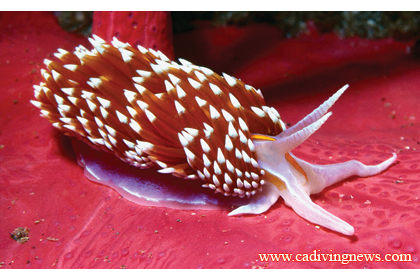 By Bruce WatkinsDecember 13, 2010No Comments

If there was a contest for the brightest, most intricate, or most ostentatious critter in California waters, the animals we call nudibranchs have got to be at the top of the list. As a group they show off the most vivid colors, and are adorned with intricate gill plumage that would arouse jealousy of the most ornate tropical bird. Yet they are extremely common and may be enjoyed by divers at nearly every site in the state.

Nudibranchs are gastropod mollusks that are distantly related to marine snails and abalone. Along the evolutionary road they gave up the need for a hard shell and protect themselves with noxious secretions and stinging nematocysts. There are an enormous number of nudibranchs, and over 3,000 individual species have been described. The word nudibranch comes from the Latin nudus, meaning naked, and the Greek brankhia, gills.

They vary in size from a little over one-half inch to over two feet. Nudibranchs have very simple eyes, which are set into the body and can only distinguish light and dark. They have oral tentacles on their head, which are sensitive to touch and taste and rhinophores that detect odors.

Nudibranchs are hermaphroditic and thus have reproductive organs for both sexes but rarely fertilize themselves. They typically deposit their eggs as a gelatinous spiral. When the eggs hatch, a veliger larva is usually released. The veliger has a shell, but once the larvae have settled out of the plankton, the shell is released and they enter a juvenile stage.

Most nudibranchs are carnivores, and have selective preferences for food. Some feed on sponges, others on hydroids, others on bryozoans, and some prefer other nudibranchs. Others feed on tunicates, barnacles, or anemones.

The taxonomy of nudibranchs is currently being revised based on new evolutionary and genetic considerations, leaving the old classification system based on morphology behind. For the purpose of this discussion the names of the different types of nudibranchs remain the same, although they may be classified by a newer system (clade instead of order, etc.).

The most common type of nudibranch by both numbers of individuals and numbers of species are the dorids. Think of dorids as the racecars of the nudibranch world. In general, they are sleek without an over abundance of bodily projections. Some, however, have fringes on the mantle that do not contain intestines (in contrast to the aeolids). Dorids have two, retractable rhinophores on their heads, and a single (exposed or naked) gill plumb surrounding an anus, which mostly, but not always, may be retracted into the nudibranch’s body. Most dorids feed on bryozoans and sponges, and protect themselves by releasing a sour liquid from their skin. Once the specimen is physically irritated or touched by another creature, it will release the slime automatically. Many are large and with striking flamboyant colors. The common Monterey dorid, sea lemon and clown nudibranch are all dorids.

The aeolids are the second largest group of nudibranchs and have obvious oral tentacles and non-retractable rhinophores. Instead gills they possess brightly colored sets of protruding organs called cerata. The cerata are infiltrated by projections from the nudibranch’s intestines. Most aeolids feed on hydroids and anemones and can store and use the their prey’s nematocysts (stinging cells) in the cerata. The nematocysts wander through the alimentary tract without harming the nudibranch. Once they find their way into the cerata, the cells are brought to specific places to be used for defense. Some can also take in plants’ chloroplasts (plant cell organelles used for photosynthesis) and use them to make food for themselves. Think of the aeolids as the best-groomed nudibranch as their cerata are often (but not always) arranged in tidy rows. The Spanish shawl, Phidiana and Hermissenda are all aeolids.

Dendronotids typically have long and tapered bodies with identical cerata-like projections or gills along their backs. Gill appendage shape is varied and can be cusped, cigars, spindles or branched tufts, and cannot be retracted. Their cerata lack extensions from the digestive system, and their rhinophores have a unique cup-like sheath. Think of the dendronotids as the worst groomed of the nudibranch world. They have gills that cover the entire length of their bodies, but they are not neatly organized in rows, but appear to protrude, spike like, in random directions. They mostly feed on cnidarians. This group contains the common festive triton as well as the white, Dall’s and colored dendronotid.

The arminids are nudibranchs that are very different from the previously described groups and do not neatly fit in to the above descriptions. Many species exhibit striated lines along their backs and have a hidden gill between the foot and the mantle. Several species have numerous gill cerata covering their back and are often confused with aeolids, although they lack of rhinophoral sheaths and, often, oral tentacles. Arminacea is diverse, so is the food they consume, with some species specializing in nudibranch eggs. There are only seven species of arminid in California waters. There are three species of Janolus, with bulbous cerata that resemble those of the aeolids: three species of Dirona, who cannot be confused with anything else with their plate-like cerata; and a single Armina that looks more like a sea hare with no visible gills or cerata.

On your next dive, get your mask close to the reef and check out the smaller and most colorful members of our California dive sites. You will be amazed by both how many and how gaudy they can be. Try to see how many types you see on each dive.