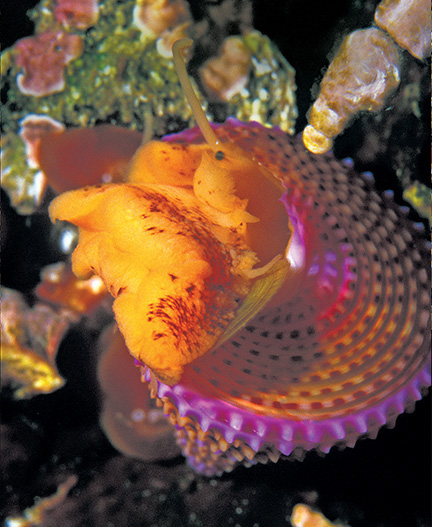 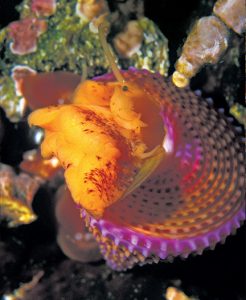 Intriguing shapes and gem-like colors distinguish the seashells shown here — but the vast majority of these fascinating marine creatures are much more cryptic. Many of them live in shells so covered with growth they are difficult to see, let alone identify.

Seashells have been around for 500 million years. Many are collected, some are eaten, and some have been used as currency. There’s even a “money cowrie.”

Seashells belong to the second largest phylum, Mollusca, which is exceeded in size only by Arthropoda. Various sources estimate there are 62,000 to 100,000 members of Mollusca, including squid, octopuses, cuttlefish, nudibranchs, snails, slugs, limpets, sea hares, mussels, clams, oysters and scallops.

According to The New Oxford American Dictionary, mollusks have soft, unsegmented bodies and live in aquatic or damp habitats. Most have an external calcareous shell.

Which brings us to malacology and conchology. Malacology is the branch of zoology that deals with mollusks. Conchology — the scientific study or collection of mollusk shells — is a division of malacology. While I started out being interested in conchology, I quickly became interested in malacology. That sparked an interest in marine biology that continues today.

One of the difficulties in writing an article on shells is that their classifications are constantly changing. The classifications of several of those discussed here are new.

Marine shells from the Class Gastropoda are the focus of this article. They have a large, muscular foot that is used for movement and, often, a single, asymmetrical spiral shell. The radula, a rasp-like organ with rows of teeth that is used for feeding, is one of a gastropod’s key features and that of each species is unique. The sexes are usually separate.

One of the things conchologists discover early on is that it’s not the prettiest shells that have the most value; it is the rarest. Years ago I was surprised to find that nearly all of those I had either collected or photographed were pretty common. Every time I’ve thought I’d found one that wasn’t I soon learned someone else had discovered, described and named it, sometimes a century or more before I set eyes on it. Aristotle is known to have studied shells.

SoCal’s most beautiful gastropod — in my opinion — is the purple ringed top shell (Calliostoma annulatum). Beaded rings of purple, gold and orange decorate this tiny shell, which can be one-half inch to nearly one and one-quarter inches tall. It is found from Alaska to Baja California. In my experience, the farther north this shell lives the larger it grows and those found in the Northern Channel Islands are bigger than those found in the Southern Channel Islands. The head and foot of the animal are gold, with irregular patches of brown.

Chestnut cowries (Neobernaya spadicea, formerly Zonaria spadicea and before that Cypraea spadicea), are noted for their smooth, glossy shells. The surface is constantly cleaned and repaired by the mantle, which secretes the shell and can cover it completely. The mantle is white, with brown warts; the foot is brown and white and the tentacles are red. The color of the shell varies and depends upon the snail’s diet, which is thought to be tunicates and hydroids. Chestnut cowries are found from Monterey to central Baja California and range in length from one and one-half to two and one-half inches long. The sexes are separate and when the eggs hatch, the free-swimming larvae ride the currents.

A close cousin of the cowrie, our next beauty is the Simnia (Simnia arcuata, previously Simnia vidleri). When underwater photographers became aware of this shell in the early 1980s, many incredible shots were taken of it. While the shell is glossy and very pretty, the animal and its mantle are equally attractive, white or golden-white with bright red markings. Like the cowrie, Simnia mantles have warts, in this case white ones. This seashell is tiny, only two-thirds to three-quarters of an inch long. Simnias live on gorgonians, eating the polyps and laying capsules, each containing several hundred eggs, on the branches. The young hatch as free-swimming veligers. The shell matches the color of its sea fan host, though I have a white one and have never seen a white gorgonian. Simnias are found from Monterey to northern Baja. Seashells of North America says, “The male controls a major part of the seafan upon which he lives and will ward off other males that encroach upon his territory.”

The coffee bean trivia is another of the newly reclassified species. Formerly Trivia solandri, it is now Pusula solandri. It is a tiny shell that resembles a cowrie in shape. However, instead of being smooth the shell has ribs that end in white pustules next to a groove in the top of the shell. This is also a small shell, it only grows to be about two-thirds of an inch long. When the brown mantle completely covers the shell it is sometimes mistaken for an opisthobranch. The giveaway is that the top of the shell and its white pustules are usually uncovered. The coffee bean trivia is said to range from Palos Verdes to Panama.

The apple seed trivia has also been reclassified. Formerly Trivia californiana it is now Pseudopusula geigeri. While the apple seed resembles the coffee bean trivia in shape it is darker in color and less than half its size. The ribs are configured differently and there aren’t any pustules. Also, the groove in the top of the shell is much shallower.

The author wishes to thank Daniel L. Geiger, PhD, Curator of Malacology, Santa Barbara Museum of Natural History, for his help in the preparation of this article.