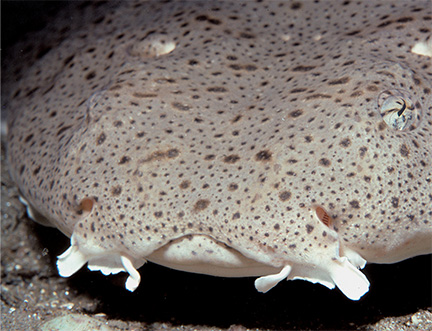 It’s Not Easy Being A Shark: A Different Look at Shark Attacks

A familiar outline materialized before me as I finned along the sea floor. The pattern in the sand left little doubt that a large angel shark rested just beneath the surface. Since completely buried animals make lousy photographic subjects, I gently fanned the sand off my shy model. The large shark seemed not to be bothered, and even tolerated my strobe as I composed shots from a variety of angles.

I noticed the angel shark had several parasites attached to its skin, sucking its blood. I attempted to pull them off, but my gloved hand did not offer enough dexterity. Only after removing my glove was I able to pick the creatures off, one at a time. The shark flinched as each parasite tore away from its skin, yet it remained still. As I replaced my glove the angel shark turned and looked at me. As we studied each other I felt a sense of “knowing.” I knew I’d just shared a tender moment with a shark. Perhaps the shark knew I intended to help. I also imagine it might have thought I was the strangest looking cleaner fish it had ever encountered.

There’s no way to know what the shark thought of me, if it thought anything at all. But I know that many people think of sharks as vicious, bloodthirsty killers. I’ll bet most people wouldn’t even consider that a shark might be vulnerable to creatures that suck its blood. The fact is, it’s not easy being a shark.

“I’ve Got You Under My Skin”

Shark skin is tough. Rather than having scales like most fish, the shark’s skin is composed of tiny, hard structures called dermal denticles or placoid scales, which are shaped like curved, grooved teeth. Which fit together like a suit of armor. Tough, indeed. But not impenetrable.

The parasites on my cooperative angel shark turned out to be a species of marine leech. Leeches are more commonly found on freshwater animals, but about 20 percent of leeches occur in the ocean. Leaches attach to the gills or skin of bottom-dwelling sharks, such as angel, swell and horn sharks. Once attached they use specialized mouthparts to penetrate the shark’s skin and suck its blood. Parasites of this kind rarely kill a shark but continue to torment the shark throughout its lifetime. Sharks lack the means to remove the parasites themselves, and rely on cleaner fish such as señoritas or sharpnose surfperch (or the random underwater photographer) to do the job.

The marine leeches are generally found only on bottom-dwelling fish, but another type of parasite, the copepod, is common among pelagic sharks. Copepods are commonly referred to as “fish lice” and are crustaceans, distant cousins of crabs and lobsters. Copepods are commonly seen on large sharks such mako, blue and white sharks, and appear as thin threads streaming from the shark’s fin tips. The thin threads may be several inches long and are actually egg cases produced by female copepods. The copepod itself is rarely over a half-inch long.

Birds “do it.” Bees “do it.” Ever wonder how sharks go about the business of making baby sharks? Every female shark that becomes pregnant must first survive a shark attack. All sharks practice internal fertilization, meaning the male must insert a modified fin called a clasper into the female to transfer sperm into her reproductive tract. During mating, the male shark must bite and hold onto the female for several minutes. When diving you might notice adult female sharks with nasty “mating scars” around the head, gill or pectoral fin region. Fortunately, female sharks have evolved to have thicker skins than males. They also heal remarkably quickly.

And Then There’s Us

Pesky parasites and repeated love bites are nothing compared to the biggest challenge faced by sharks — surviving attacks by man.

In Monterey Bay squid are fished at night with lights and purse seine nets. Boats circle the squid, draw the bottom of the net closed, haul the entire catch into the hold, and sort it once they return to the dock. Any animal feeding on the squid ends up in the boat’s hold along with the squid. Anything that isn’t squid is considered trash, and is tossed overboard. Should you dive under or near a commercial dock during squid season you may encounter a watery graveyard. On one such dive I discovered scores of dead blue sharks, a dozen bat rays and a single dead sea lion. All this death has a name: incidental bycatch.

Not so much as a week before I had the opportunity to swim with blues in the open ocean. Sleek, graceful, and beautiful — my first reaction to these animals was one of awe. I was grateful for the opportunity to experience them. But now I was haunted by images of rotting corpses. Their deaths didn’t seem incidental to me.

It is believed that these fishing practices have dramatically reduced the size of the blue shark population.

Sharks are also deliberately hunted for their meat, for fish oil, and for use in shark fin soup. After the populations of swordfish began to decline from overfishing, fishers began to target thresher and mako sharks. These sharks are good eating, and most people could not tell the difference between a swordfish steak and a thresher shark steak. However, it is way too easy to overfish shark populations, and mako and thresher populations have dramatically declined worldwide.

In California, soupfin sharks were hunted relentlessly during the 1930s and 1940s and 4,000 tons were landed each year. Overfishing has reduced the catch to less than three tons in recent years. Worldwide, 73 million sharks are harvested annually for their fins, which are a prized ingredient in Asian shark fin soup. (See sidebar.) In many instances, fins are cut off of live sharks; the finless sharks are thrown overboard and allowed to slowly suffocate. Shark fins command a high price, over $400 per pound. The shark fin trade is illegal in many countries, but the trade generates so much money that officials are often bribed to look the other way.

Sharks have two strikes against them. First of all, increased demand for shark fins in Asia, coupled with today’s advanced fishing methods, are decimating shark populations worldwide. Secondly, sharks can’t reproduce fast enough to keep up.

Like most animals that exist high in the food chain, sharks produce very few offspring each season. Some female sharks birth as many as 100 young per year, but some reproduce as few as one pup each year. Compare this to other fish species that may produce many thousands of young per season, or a single invertebrate that may lay millions of eggs at one time and you gain perspective. For a species to survive, a high percentage of its offspring must survive to breeding age, and each adult female must enjoy a long reproductive lifetime.

In order to prevent extinctions of sharks and other species, fish stocks must be carefully managed. The establishment of marine protected areas (MPAs), areas where fishing and/or harvesting is restricted or off-limits, is one conservation method that is proving successful.

The California Department of Fish and Wildlife has the difficult task of maintaining fish stocks by regulating the catch of marine animals that are slow to reproduce. For instance, the state has dramatically restricted the use of long lines and banned gill nets in state-controlled coastal waters.

Legal protection for sharks has been slow, but dedicated organizations here and across the globe are making steady progress. In 1994 California banned fishing for great white sharks. In 2013 California banned the sale and possession of shark fins. While this had little impact on California’s shark populations, it did prohibit the importation of fins for use in soup. California, Oregon, Washington and Hawaii have prohibited the warehousing and trade of fished fins originating from other countries. This measure will help make it difficult for fins from Central and South America to reach Asia via the United States.

Sharks lack the “cute and fuzzy” characteristics that have lead to the successful protection of other marine mammals. Thankfully, many non-profits have organized divers under a “save the sharks” banner. It’s not easy being a shark. As divers, we can help dispel myths about sharks as vicious attackers, when it’s the sharks that are under attack.

Shark fin soup has for centuries been considered a luxury dish traditionally served at special occasions such as weddings in China and other Asian countries. Shark fin has no flavor or nutritive value, but is used to provide texture for the soup and promote an individual’s wealthy status.

The demand for shark fin soup went up when income levels of Chinese increased worldwide, causing shark fin prices to skyrocket. However, in recent years, international outcry over declining shark populations has helped curbed the Chinese obsession with shark fin soup. Consumption is reducing, which is proof that public outcry can change popular culture.

To learn how you can help,
visit stopsharkfinning.net.

To learn more about shark conservation, visit the following websites: