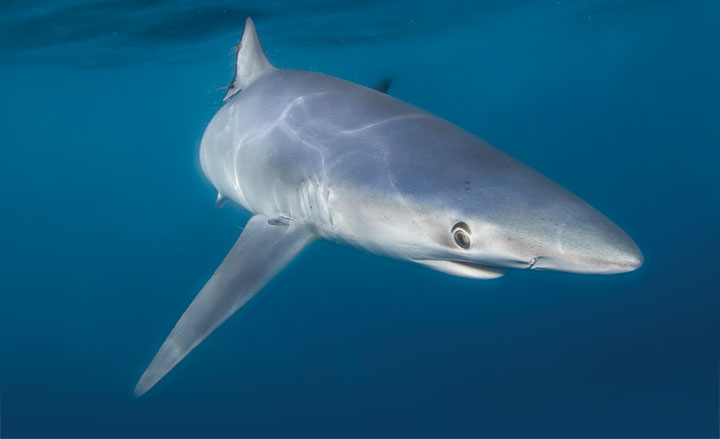 Marine researchers estimate that at least 34 species of sharks have been recorded off the Pacific Coast of North America. Some of them are rarely seen, and some species that were once commonly seen have, in recent years, become scarce due to overfishing.

Thankfully, with proper resource management, shark numbers, at least in some species, appear to be increasing. This is good for the marine environment because sharks are important apex predators. It’s also good for us divers who are lucky enough to call California waters home, because it gives us better odds of meeting one of our neighbors while on a dive outing.

I know it’s not fair to have favorites, but I must admit that of all the shark species that frequent local waters, the blue shark and shortfin mako are among my favorites. In this article I’d like to help you get to know, and perhaps better appreciate — and help advocate for the continued protection of — these fascinating marine creatures. 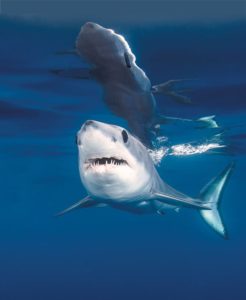 Adjectives such as sleek, graceful and gorgeous are not the descriptive terms we normally hear or read when sharks are being discussed. But in the case of blue sharks, these modifiers are right on target as many specialists consider blue sharks to be one of the more beautiful of all species of sharks. When blues are sighted on sunny days in relatively clear, shallow water the brilliance of their shimmering indigo coloration is nothing short of absolutely stunning.

The origin of their scientific name, Prionace gluaca, is derived from the Greek, Prionace, for “saw tooth,” and, glauca, for “blue.” Like most open water fish blue sharks are distinctly countershaded, meaning they are darkly hued on their topside, or back, and lightly hued on their bottom, or underbelly. Many fishes that live in the open sea utilize this type of camouflage to help themselves blend in with their liquid blue surroundings. When blues are observed from above, the darker dorsal side blends in with the water below, and at the same time, when potential prey or predators observe the sharks from below, the light underbelly blends in well with the brightly lit, lightly hued surface waters.

Despite the fact that blue sharks live in the open sea over very deep bottoms, they tend to prefer to inhabit the upper portions of the water column. They typically occur anywhere from the surface to 150 meters in temperate seas worldwide, but occasionally blues are discovered to inhabit deeper, colder water in tropical climes. Odds are good that if you are in the open ocean off the coast of southern California or New England, blues are the species of shark you are most likely to spot from a boat. On calm days, the dorsal fin of a blue shark can often be seen sticking out of the water in a compelling sight as the shark cruises at the surface.

Because blue sharks swim twenty-four hours a day every day of their lives, efficiency is important, and this is reflected in their body structures. Compared to bony fishes, the density of body tissues is reduced in sharks. The less dense sharks are, the less lift required to maintain their position in the water column. In the water, Blue sharks weigh only 2.5 percent of what they weigh in the air, an extremely low density.

Air bladders, also known as gas and swim bladders, are used by bony fishes to help them maintain and control buoyancy. Like many other sharks, blues lack a gas bladder. However, sharks utilize other adaptations to help them efficiently control their buoyancy. Sharks possess large, oily livers that help reduce their body density so that these animals are more buoyant. Not having to alter the gas content of a swim bladder enables sharks to rapidly change their depth more freely than many bony fishes. This ability can be a distinct advantage for a marine predator that makes its living by chasing down prey in the open sea.

With sleek, well-muscled bodies, blue sharks are efficient swimmers. Their “just cruising” speeds are roughly as fast as the sprint swim speeds of human swimmers. And when they hit the accelerator, blues can disappear in the blink of an eye.

As is the case with many species of sharks, loosely organized local populations of blue sharks tend to be segregated according to sex. As a rule, in the waters of southern California divers and fishermen see almost all males in the summer and fall, and almost all females in winter and spring. Sexing sharks is relatively easy, especially if you get a look at the animal’s underbelly. Males possess two claspers, tube-like organs used to deliver sperm to females. The claspers are located on the underbelly about one-third of the way up the body from the tail. Females lack claspers, but do possess a slit in the body in roughly the same position where the claspers are on the males.

Fertilization is internal in all sharks, meaning males and females copulate rather than spawn, an act in which sperm and eggs are released into the water column where concentrations can be rapidly diluted. Internal fertilization offers the advantage of giving sperm and egg a better than random chance for union, but posseses the problem of how to accomplish the task. When copulating, male sharks often bite females on and around the pectoral fin in order to get a grip on the female so that the amorous duo can interlock tails and the male can insert one of his claspers. As a means of protecting themselves, the skin around the pectoral region of the bodies of females, an area known as the pectoral girdle, is as much as three times thicker than the skin of males. Litter sizes in blue sharks vary greatly having been documented to range from 4 to 135 young. Pups are born live.

The diet of blue sharks consists mainly of a variety of small schooling fishes, pelagic crabs and squids. They are opportunistic feeders and have been known to decimate carcasses of floating marine mammals as well as readily feeding on trash from boats.

Witnessing natural predation is a relatively rare event in the world of sharks, but there is a notable exception with blue sharks in southern California. Market squid typically spawn one time at the end of a one-year life span. These squid live the vast majority of their lives in the open sea, but they enter nearshore waters to reproduce. For this to happen successfully, the squid gather in large numbers, and this opportunity can provide a feast for hungry blue sharks. The sharks often gorge themselves until their bellies are distended and squid tentacles are hanging out of their mouths. 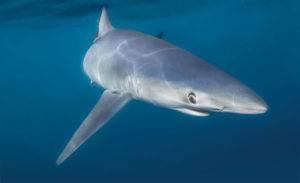 Shortfin mako sharks are powerful, efficient and fierce looking. They are remarkably fast swimmers, having been clocked at over 20 miles per hour, and in fact are believed to be the fastest of all the sharks. Shortfin makos are a member of the mackerel family, or Lamnidae, and are closely related to great white sharks, salmon sharks and porbeagles.

Shortfin makos are the sleekest of all the mackerel sharks, but they are solidly built, and a healthy adult is a very impressive, muscular looking animal. And as their common name implies, Shortfin makos possess rather stubby pectoral fins. This species is also commonly known as the mako shark and as the bonito shark, and they are often observed around schools of the fish commonly known as bonito.

Shortfin mako sharks typically inhabit the open ocean and while they are occasionally seen in nearshore areas. They are distinctly countershaded in a natural design that is similar to many creatures that live in the open ocean. The back and upper portion of these sharks is a beautiful indigo blue while the underbelly is whitish. Shortfin makos possess long, pointed, spear-like teeth designed for impaling and grasping fast moving fish in the open ocean. Known to specialists as “fish-teeth,” this type of tooth is made to “spear and hold,” but not for “sawing and ripping.” This is a great design for a shark that feeds on fast moving fishes, but not a tooth that one might expect to find in a species that preyed upon large marine mammals.

It should not come as a surprise to learn that the typical diet of these sharks includes tuna, anchovies, sea bass, mackerel fish, cod and squid. Shortfin makos are known to readily pursue large fishes such as swordfish. Scars found on some makos as well as remnants of the swords in gut analyses are proof of this feeding behavior.

Close scrutiny of the teeth in sharks reveals just how specialized and different the more than 370 species of shark are from one another. Various species possess adaptations that help them fit into their own unique niche in the marine environment.

Sport fishermen know Shortfin makos as wonderful fighters, and they are in fact, the only shark recognized as a “game fish.” Shortfin Makos were made famous by the author Ernest Hemingway in his novel, The Old Man and the Sea. In this book, a mako eats the prize marlin.

Most sharks are cold-blooded animals, but shortfin makos are an exception. In this species the circulatory system helps blood stay warmer than it does in most sharks, and as a result the core body temperature is usually a few degrees above ambient water temperature. Elevated body temperature provides for a faster muscular response and enables makos to swim fast without using too much energy. In this respect, the circulatory system of shortfin mako sharks is similar to that of tunas.

One of the most striking characteristics of shortfin mako Sharks is that they tend to swim with their mouths open wide enough that it is easy to see a number of long, sharp teeth. Combine that feature with a muscular, torpedo-shaped body that in temperate waters is often covered by a number of stringy-looking parasitic copepods that concentrate around the face and dorsal fin, and you have an animal that has the look of a frightening creature that is “perfect for Hollywood.”

Shortfin mako sharks are livebearers, but that is not the complete story. The males impregnate the females, who carry eggs inside the body. The young sharks develop inside of the egg and hatch months later. At that time the first born in each uterine canal is believed to devour any unhatched eggs as a means of gaining additional nutrition. It is also believed that the firstborn will readily prey upon its brothers and sisters inside of the mother. Specialists believe that two shortfin mako pups are born during each season, one from each of the two separated uterine canals. This method of reproduction might sound cruel, but this is Mother Nature’s way of ensuring that the surviving pups have the best chance to survive.