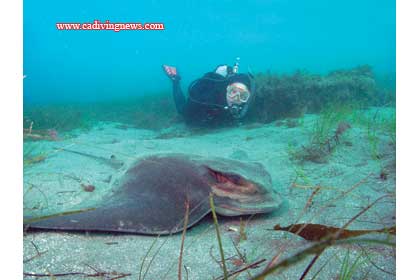 By Bonnie J. CardoneDecember 13, 2011No Comments

One fine summer day years ago, a friend and I took a small boat to a shallow cove off Anacapa, hoping to photograph the large number of bat rays that had gathered there. To avoid spooking the rays, my friend advised me to “slither” into the water as silently as possible. He slipped in first and I followed.

Perhaps our technique needed work. First one, then another, then all of the rays — and there were a lot of them — rose from the bottom and “flew” out of sight en masse, leaving behind clouds of sand and empty depressions on the bottom where they had been.
My success at photographing these fishes before and after that brief, unproductive encounter has hinged on chance. Both the ray and I have been surprised to see each other, and I have managed to shoot one or more photos before it departed. Bat rays are not fond of human company or even that of other rays except during mating season. They are most active at night, and if you see one flying by during the day, it is probably fleeing another diver.
Bat rays are not aggressive and in 38 years of diving I have never heard of a diver being stung by one. Beach-goers wading in shallow water are more likely to accidentally step on a ray and get stung, although that is rare.
The stings are delivered by the one to three venomous spines that bat rays have at the base of their tails. The venom makes the stings excruciatingly painful and, if the symptoms are severe, medical attention may be needed.
Bat rays can be brown or black on top (most of those I’ve seen appear to be dark gray) and have white undersides. They can have a wingspan of six feet and are found from Oregon to Baja California, in waters as deep as 150 feet.
Rays are close cousins of sharks. While both are fishes, their skeletons are made of cartilage, not bone. Bat rays’ pectoral fins are broad and flat and used to swim in much the same way birds use wings to fly. Bat rays’ tails are used for steering and balance.
The scientific name of the bat ray commonly found in California waters is Myliobatis californica. In his book, Probably More than You Want to Know About Fishes of the Pacific Coast, Dr. Milton Love points out that Myliobatis means “grinder ray” in Greek. The bat ray’s teeth are designed for grinding its food, which includes clams, crabs, shrimp, worms and snails, as well as fish. The ray uses its snout and “wings” to dig in sand or mud for its meals, leaving large depressions and the broken shells of its prey. It also leaves hexagonal-shaped teeth. Like sharks, when bat rays’ teeth wear out or break, they fall out and are replaced.
Dr. Love notes that female bat rays “grow larger faster and live longer” than males. During spring and summer, which is mating season, you’ll often find bat rays congregating in shallow, sandy areas such as the one my friend and I visited off Anacapa.
Bat ray fertilization is internal. The eggs develop in the female for as long as a year before hatching. The pups are born live, emerging tail first, with their wings wrapped around their bodies. To protect the mother, the stinging spines are flexible and covered with a sheath that drops off after birth. Litters consist of 2 to 10, 9 to 12 inch-long pups that are miniature versions of their parents.
Bonnie J. Cardone is a long time California diver and author of hundreds of articles on nearly every conceivable marine related subject. She lives on the Central Coast.