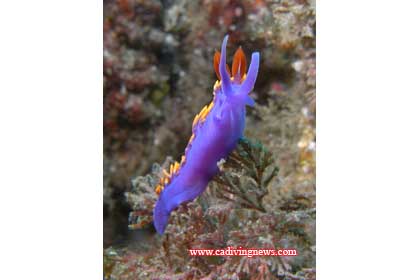 By Craig HooverNovember 29, 2011No Comments

Ever see pictures of a critter that seems to have evolved from that box where all the holiday decorations are stored? Chances are you’re looking at a nudibranch.

Nudibranchs (sometimes affectionately called “nudis”) are members of the opisthobranchs, also known as sea slugs. The name nudibranch literally means “naked gill.” Their body shape ranges from oval to long and tapered. All have some form of rhinophores; think rabbit ears, on their front end. Projections of varying heights may be present on the back.
A group of nudis called dorids have projections ranging from patches of tiny glass like shards called tubercules, to bumps called papillae. Dorids also possess a rosette like organ called a branchial plume. This organ is their gill and is located on their back. Another group of nudis called aeolids lack a branchial plume. The projections on their backs, known as cerata, are long tubes connecting to their digestive system.
Branchers are people who search for nudis. With a few basic skills, these exotic creatures can be found at most California dive sites. Add in a little knowledge of what to look for, where to go, when to look and over a hundred species can be found throughout California. Here are some tips to becoming a brancher.
Know how to move underwater. Move around with eyes no more than a foot or two above the bottom. Nudis are small creatures, most ranging from a few millimeters to a couple inches. Looking closely at marine life will help to process small details that can separate a nudi from the sponge next to it. Experts often do not use fins to move through water, instead maintaining neutral buoyancy and allowing surge to move them over the reef. Finger holds may be used to resist the backward pull of surge. Care must be taken to select holds that will not damage the reef when moving this way. By allowing the ocean to do the work of movement, a brancher slows breathing and conserves air. This improves buoyancy and slows down the pace to a rate allowing careful examination of marine life. Minimal use of fins also prevents the stirring of sediment that can reduce visibility.
Know what to look for. Picture books and online guides provide insight into the shapes and colors of nudis. Reefs are a mosaic of anemones, sponges and other colorful things that look similar. Separating a nudi from the reef is a skill that improves each time a brancher looks at these animals. Those with experience may look through pictures to learn which ones they have not found yet. Many nudis look similar at first glance. Careful examination leads to an appreciation of details.
Know where to look. Deeper reefs between 35 and 60 feet are excellent places to find nudis. Surge at these depths is less than shallower reefs. Usually visibility is better here. More invertebrate life grows because plants do not have the light they need to compete for space. Soft corals and sponges provide food for nudis while making the reef colorful. Sites like Old Marineland (Terranea Resort, Rancho Palos Verdes) and Deer Creek (northwest Los Angeles County) are beach sites to check out while the Flame Reef, Santa Cruz Island, is an excellent boat dive.
One habitat favored by expert branchers is the top of the slope of a submarine canyon. The slope between 35 and 50 feet deep accumulates loose bits of plant known as detritus. Nudis roam this miniature jungle. Redondo and La Jolla Canyons produce unique finds each year.
Pier pilings are a good place to search. Hydroids growing on the wooden columns provide food for a variety of nudis. There may be some very tiny individuals here. Old Redondo Pier #3 and the Morro Bay T Pier are great sites.
Know when to look. Some nudis are present year round and others are seasonal. The same species may be abundant different times of the year at different sites. In some years a species may be abundant and in other years it may be rare. Branchers who want to find a rare species should research the dates and locations of published sightings. This can be done online with a search for the scientific name of the species. Congregations of a rare species may last only a week or two. If you stumble across a current sighting of several individuals of a rare species and want to see one for yourself, search within the next week.
Branching is a fun specialization in diving. Develop a little proficiency and you can show your buddies fantastic critters. A light or a camera can add further enjoyment to the experience. Be sure to look up once in a while. Fish become curious and will approach stationary divers. The next time you hit the water try branching, the holiday awaits.