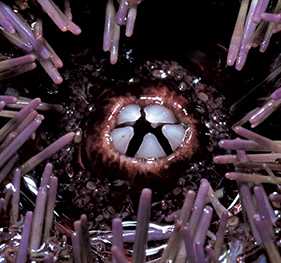 Attack of the Purple Sea Urchins: What Happens When Nature is Out of Balance

Anyone who has dived California’s reefs in recent years, or has read this magazine or the mainstream news media is aware of the unprecedented changes our local reefs are experiencing. Right or wrong, the evil villain in many of these accounts is the purple sea urchin. In this article I describe a bit of urchin biology, how they fit into California’s reef community, what is going wrong, and how divers and citizen scientists can help.

All sea urchins are members of the phylum Echinoderma. This Ancient Greek name translates literally to “spiny skinned.” All echinoderms have hard outer skeletons. They also have water-filled tubes that act as “feet” to permit them to scurry across the sea floor. There are about 7000 living species of echinoderms, and all adult echinoderms possess fivefold radial symmetry. Sea stars, brittle stars, sea cucumbers, and sea lilies are also echinoderms.

Sea urchins have shells covered with spines. Their spines can be moved to get out of the way when they choose to enter narrow crevices, or be directed at a predator. Urchins possess a feeding organ that biologists have named Aristotle’s lantern. The jaw apparatus consists of teeth supported on five, strong arrow-shaped plates known as pyramids, with a fleshy organ that serves as a tongue. The mouth is on the bottom of the animal and the anus is on the top.

About 950 species of sea urchins may be found in our oceans, and divers may find eight different species of urchin on California’s reefs: the slate pencil, crowned, white, purple, red, green, and heart urchin, as well as the sand dollar. Purple sea urchins are the most common urchin found on our California reefs, and they are one of the most thoroughly studied of the ocean’s critters.

Purple Urchins as a Member of the Reef Community

Like all animals, purple urchins occupy an important niche on a healthy reef, serving as grazers who scavenge the seafloor keeping things clean. On a healthy reef purple sea urchins spend most of their life hidden within a crack in the reef. They mostly feed on kelp fronds that became detached from a plant and drift along the sea floor. A purple urchin’s favorite food is giant kelp in Southern and Central California, and bull kelp in Northern California. Urchins are reluctant to leave the protection of their crack, particularly when there is an ample supply of drifting kelp and when the population of predators is high. They sometimes venture out of their crack to forage on kelp and dead fish, mostly under the cover of night.

This is because urchins are very tasty to many sea dwellers. Sea stars, particularly sunflower stars, lobsters, some fish, and sea otters are very fond of purple urchins. Lobsters, sheephead, and horn sharks are the principal predators in Southern California, otters in Central; however, sea stars are the exclusive predator in the north.

Many humans are fond of urchins as well. In the Mediterranean and Japan, urchin, called riccio di mara and uni, is considered a delicacy. There is not much of a commercial fishery for purple urchins, since the larger red urchins are more economical to harvest. Sport fishers can harvest purple urchins, and some do, but generally prefer the red urchins. A dynamic predator-prey relationship and a modest human harvest normally keeps the purple sea urchin population at a healthy level.

Nature Out of Balance

In a recent version of the motion picture, “The Lone Ranger” Johnny Depp’s Tonto was fond of saying, “Nature out of balance.” That perfectly describes what’s happening on California’s reefs these days. Warmer water temperatures stressed the kelp throughout California, putting kelp in decline and at risk of disease. In Northern California a virus decimated the sea star population, causing the purple urchin population to explode. The urchins proceeded to consume most of the kelp. In the absence of predatory sea stars the urchin population came out of hiding and consumed not only the drifting kelp, but the kelp holdfasts as well. Without a reliable anchor to the sea floor, huge beds drifted away, and the vast majority of the beds of bull kelp in Sonoma and Mendocino Counties disappeared in a short period of time. Many of the animals that feed only on kelp, like abalone, began to starve to death, and animals that used the kelp for shelter or to rear their young either left or were easily consumed by predators. This resulted in the closure of the abalone fishery until at least April 2021. In spite of the poor quality of the kelp bed and reef, purple urchins continue to dominate the reef in huge numbers, leaving vast tracks of nothing but bare rock and urchins — urchin barrens.

It’s All About The Teeth

Purple sea urchins may very well be the ocean’s ultimate survivor. Urchins can tolerate and thrive in waters over a wide range of temperature and salinity, and can consume a wide range of food. While on a healthy reef they can do just fine on a diet of brown kelp, in the absence of kelp they can consume most anything else. Their capacity to survival mostly comes down to their teeth.

An urchin’s teeth are very adaptable and enable the animal to grasp, scrape, pull and tear. The teeth of a healthy urchin are optimal to gnaw away on bits of drifting kelp, but they can do so much more. If suitable cracks in the rock are hard to find, they can use their teeth to excavate a home into solid rock! Their teeth are self-sharpening, a property that scientists are studying to develop self-sharpening tools. Seems urchin’s teeth are composed of layers of calcium carbonate and organic material, and the alternating layers allow the tooth to flake away, leaving a very sharp edge. An urchin’s teeth grow continuously through its life.

But, it gets worse. In tough times, urchins can double-down on their chompers. In laboratory experiments conducted by Dr. Levitan at the University of Alberta discovered that starved urchins put more of the available calcium into their teeth to produce teeth that were significantly larger than the teeth of well-fed animals. This allows them to feed more efficiently on kelp, but also allows them to take on different food. After the tender bull and palm kelp are consumed, they go after coralline algae. During one of the urchin removal events at Ocean Cove, all of the urchins harvested had stomachs full of ground up coralline algae.

When the algae are depleted they then began to feed on tougher pray. Their heavy-duty teeth can now be used to rasp through barnacle and mussel shells. I have observed purple urchins feeding on abalone, and have heard a very reliable observation describing a horde of purple urchins devouring a sea lion carcass.

What You Can Do To Help

The urchin barrens of Northern California currently encompass most of the reefs of Sonoma and Mendocino Counties, an area too large to remediate. Some believe that we should accept this “new normal,” and give up enjoying these reefs. Others believe that urchins should be removed from a few select sites to maintain “islands” of healthy kelp communities. These could act as sanctuaries, and allow many species of marine life to repopulate the reefs when ocean conditions improve. There are several efforts underway to do just that.

If urchins are the villain in this story Joshua Russo is the hero. Joshua, the president of the Watermen’s Alliance, organized a number of kelp restoration efforts. He manages a program to pay commercial divers to remove purple urchins from several NorCal coves. To date $130,000 has been collected. The Mendocino County Fish and Game Commission and Sonoma County Fish and Wildlife Commission donated a total of $45,000, and the rest came from private donations and a raffle organized by Matt Mattison of Norcal Underwater Hunters.

He also organized bimonthly events where sport divers remove purple urchins at four coves in Sonoma and Mendocino Counties. The Fish and Game Commission assisted in the effort by increasing the bag limit from 35 urchins to 40 gallons of crushed urchin, and collects scientific data at these events. By the end of 2018 both the sport and commercial effort removed 58 tons of purple urchins. To volunteer find the Watermen’s Alliance Urchin Removal Events Facebook page. The next event is May 18-19 at Ocean Cove in Sonoma County. To contribute to the commercial diver effort, please send a check or money order to: Watermen’s Alliance, 255 Conejo Rd., Santa Barbara, CA 93103.

In addition to this effort in NorCal, a scientific collecting permit was issued to a joint effort between Reef Check and the University of California at Santa Cruz. This effort involves the culling of purple urchins to specific densities on specific reefs to determine the density of urchins that will allow the kelp beds to grow back. There is also an effort underway to allow sport divers to restore the kelp bed at Tanker Reef in Monterey. Check out G2KR.com to learn how you can participate in these efforts. You can also look into joining other Reef Check citizen science programs on their website, reefcheck.org/california/ca-overview.

As of this writing both the Federal and California Governments are considering funding the commercial removal of purple urchins. Please write to your Congressional Representative, state senators and assembly members. Please tell them that you are concerned about the loss of kelp and marine habitat in California, and ask them to fund kelp bed restoration efforts. You can find your representative at findyourrep.legislature.ca.gov.