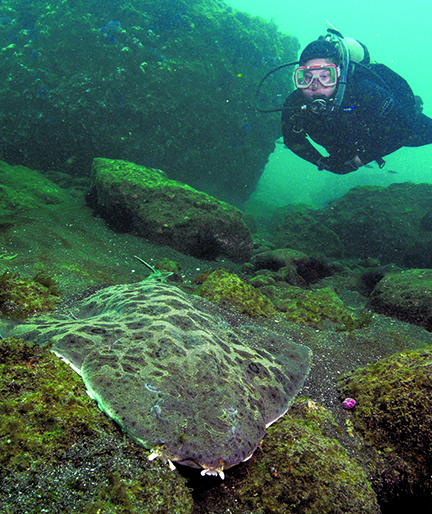 Diversity Not Far From Shore: Malaga Cove Has a Lot to Offer 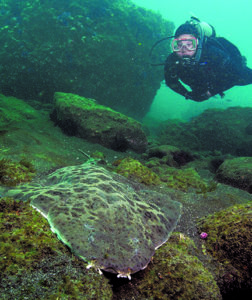 Malaga Cove lies where the long sweeping beaches of the Los Angeles South Bay end and the rocks and cliffs of Palos Verdes begin. This makes for an interesting dive site offering diverse environments of sand, rock reefs, and kelp beds all in the same general area. The juncture of these underwater terrains offers not only more areas to explore but also a differing set of marine life.

In the rocky areas, lobster is not uncommon although most are small. This spot is a consistent producer of small but legal-sized bugs early in the season. The area to the southeast is best. Considering the good access to this location these waters hold a fair amount of game. Kelp bass can be found around the kelp beds and halibut over the sand. Just remember to follow Fish and Wildlife regulations to the letter.

For the photographer and sightseer, diving Malaga Cove will show you marine life not easily found in other beach dive locations around Palos Verdes. Coming across an angel shark buried in the sand can be an exciting experience. Some divers have reported seeing some as large as five feet long! Look farther out along where the sand meets the outer reefs and you may find a horn shark or maybe even the graceful but shy soup fin shark. Octopuses hide in the cracks. The comical sheep crabs often crawl across the rocks. You will also find the more common varieties of invertebrates, including colorful bat stars, ochre stars, nudibranchs, and gorgonian. Garibaldi are abundant and quite tame. Sometimes schools of barracuda pass through along with small white sea bass. And keep your eyes peeled for small black sea bass that sometime hang around under the kelp.

There are no facilities here but the parking area is free and good sized. Before heading for the beach proceed to the gazebo that overlooks the cove from the cliff above. This vantage point is excellent for observing the ocean conditions below. There is a paved path that leads to the beach off to the right. The path is moderately steep but short.

There are two general entry areas; you can enter from the rocks or from the beach to the right. Entering from the rocks shortens the swim to the outer kelp considerably but can be hazardous and should only be attempted in calm conditions. The area immediately in front of the rocks is quite shallow, so use caution. Many divers prefer to enter at the sand beach to the northeast and swim out to the edge of the reefs. It requires a longer swim to the outer reefs but is less risky. If entering from the beach, watch out for surfers.

Although visibility averages around 10 to 15 feet, conditions at the cove vary considerably. It is often said of Malaga Cove that when the conditions a good here, they are great — but when they are poor they are terrible. The cove is open to the westerly and northwesterly swells. In addition storm rainwater runoff can affect the visibility. When it looks poor, head to the other side of the peninsula or drive north to Redondo Submarine Canyon off Veterans Parks. If the weather is coming from the south, or if a Santa Ana condition exists, Malaga cove can offer superb diving with visibility up to 25 feet. Fortunate for us beach divers we can get a good idea of conditions of the ocean from the gazebo. Bring binoculars for a good look over the area and get a general concept of what you can expect for water clarity.

There are actually three diving areas in this vicinity. Haggerty’s is to the left or southwest along the path. The main reefs are pretty much in front of you. To the north is RAT Beach Reef.

Old man Haggerty once owned a mansion (now a church) on the bluff above and he tried building a pier extending into the bay from the beach but it did not last long in the winter storms. Evidence of the pier can be found on the shallow bottom seaward of the building. While it is difficult to pick out the pilings on the bottom, early in season they hold a legal-sized lobster or two underneath. Rock ridges further out are covered in kelp and a smattering of smallish lobster also reside there.

It is tough hike over a stone path but it leads to even better diving. Further down Paseo Del Mar there is a somewhat manageable path descending from the bluff above but it often washes out during years with heavy storms. Or you can just take the long swim up from the main entry point at the end of the path or even a longer one from the sand beach.

Finally there is the relatively obscure RAT Beach reef. It’s not named for rodents, but is an acronym for Right After Torrance. Here you’ll find a relatively flat reef in shallow water. There’s no kelp here, but lots of big bat rays, halibut, and large calico bass. For variety it is definitely worth a visit on good days of calm clear waters. From the gazebo over looking the area on a clear water day you can make out the dark area of the reef just a short distance up the beach to the north. Look out from the white bluff onshore.

After your diving, Torrance Beach, adjacent to the cove, offers a secluded sunning spot that is relatively uncrowded and peaceful compared to the rest of the South Bay. Bring your non-diving family. Also, on calm days the snorkeling over the shallow reefs near shore can be quite good.

Location: Intersection of Paseo Del Mar and Via Arroyo across from the backside of Malaga Cove School, Palos Verdes Estates.

Entry and Exit: Calm surf at high tide is a must.

Visibility: Variable depending on surf and rain runoff.

Cautions: Do not dive here if the surf is up.