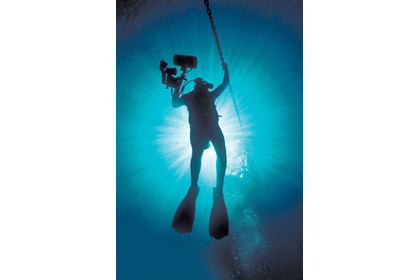 Welcome to the Second Golden Age of Diving

By Marty SnydermanJune 8, 2012No Comments

We were treated to one fantastic image after another. We saw it all from nudibranchs and squids to sharks and whales. The imagery came from destinations as distant as the Solomon Islands and as close as La Jolla Shores, a popular dive site well known for wintertime squid runs that is only a mile or so from the auditorium where we were sitting.
As the show ended I commented to several friends that during the evening my thoughts had wandered back through the years of previous SDUPS film festivals and the many presentations I have so thoroughly enjoyed. I shared my story of sitting in the audience for the first time in 1975, the year I moved to California and became a scuba instructor. I remember the night so well because it was the first time I realized that an ordinary sport diver like me could be part of an underwater film festival. Although I barely knew the difference between an f/stop and a bus stop, that night I set a personal goal of being a presenter at a future SDUPS film festival.
I was really lucky. In 1975 I had just started working at a dive center owned by legendary underwater cinematographer Chuck Nicklin. Howard Hall, who along with his wife Michele currently produces underwater IMAX films, and Chuck’s son, Flip, who became a highly acclaimed whale photographer, also worked there. What it meant for me was that I had a place to share my passion and learn, and that clearly played a huge role in launching my career.
One of my longtime diving friends responded to my comments by saying, “We didn’t know it at the time, but that was the golden age of sport diving.” He went on to point out how many fantastic new developments were just emerging onto the diving scene in the mid-1970s. We had access to the first readily available amphibious cameras. Strobes replaced flashbulbs. Back-mounted buoyancy compensators, dive computers, resorts that catered to divers and live-aboard dive boats began to gain acceptance. The diving world was developing fast, and it was an exciting time.
As our conversation continued one of my friends turned to me and asked, “Do you know how lucky you were? You were in the perfect place at the right time. You had a place to learn and the right people to teach you. Most of us didn’t.”
His observation was right on target.
Today, it’s far less about fate, and much more about taking advantage of what the diving world has to offer. This is why I think we are coming into the second golden age of diving, a time when expertise and opportunity is readily available to all of us. Today, you can walk into your favorite dive store and take a course in just about any aspect of diving that interests you. Whether its photography, videography, night diving, technical diving, spearfishing, or becoming an instructor, no matter what your passion, the odds are very much in your favor that the staff in your favorite dive store can help you realize your diving dreams.
The right time is right now. And it’s easy to put yourself in the perfect place. Simply walk into your favorite dive center and see what classes, activities and dive trips they have to offer. My bet is that you will find exactly what you are looking for. Welcome to the second golden age of sport diving!