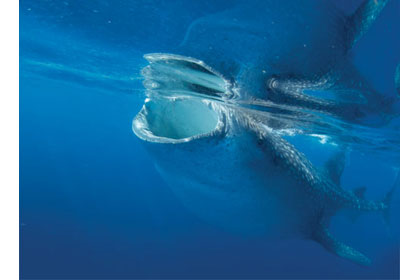 By California Diving NewsNovember 10, 2014No Comments

A group of fishermen off Catalina Island were treated to a rare surprise on Sunday, September 14, 2014 when a large shadowy figure surfaced near their fishing boat, the Triton. It turned out to be a whale shark, estimated to be about 25 feet in length.

Whale sharks are the world’s largest fish and have been measured at more than 40 feet long. They are plankton eaters, and usually seen by divers in the warmer waters of Southern Mexico and in the Sea of Cortez.
In addition to the whale shark sighting, evidence of which was backed up by a video taken by those on board the fishing boat, anglers and divers have reported seeing other marine animals that are rarely encountered in SoCal waters. For example, blue marlin and mahi mahi have been reported as far north as Oxnard, hammerhead sharks have reportedly been seen off San Diego, and sperm whales have reportedly been spotted near Dana Point.
So why have these creatures found their way north? Researchers believe that increased southern California sea surface temperatures–an El Niño–might be one reason why several marine species appear to have increased their northerly range.
According to the website of the Scripps Institution of Oceanography at San Diego “El Niño is a phenomenon characterized by warmer sea surface water in the equatorial Eastern Pacific Ocean. An El Niño is defined by a seasonal sea surface temperature anomaly in the eastern/central equatorial Pacific greater than 0.5 C° (0.9° F) warmer than historical average temperature. The opposite phenomenon known as La Niña is defined as a seasonal sea surface temperature anomaly 0.5° C (0.9° F) colder than the historical average.”
The Scripps website explains that the term “El Niño” has existed “since the 1890s, having been so nicknamed by South American fishermen, who acknowledged the birth of Christ by associating an onset of warming ocean water with its Christmastime appearance. Modern El Niño research, however, began mainly after a strong episode in 1982-83 that had gone largely undetected by scientists until it was well under way. That event caused more than $13 billion in economic loss worldwide and prompted more than a dozen countries to make large investments in El Niño research. Advances in data collection and computer modeling enabled researchers at Scripps and elsewhere to forecast a major El Niño in 1997-98 with success, though the models were relatively crude compared to current generations of models.”
To learn more about the effects of El Niño and the ongoing efforts by Scripps researchers to collect and analyze oceanographic data, visit www.scripps.ucsd.edu.