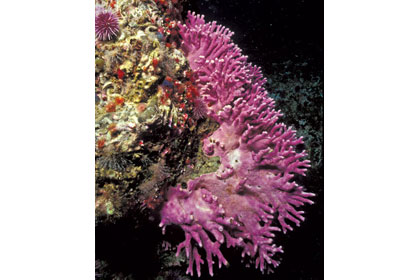 Much prized by underwater photographers for its beautiful colors, California hydrocoral (Stylaster californicus) is one of the 350 species of hydroids in the Phylum Cnidaria. A close cousin of the fire corals found in tropical waters, it is not a true (stony) coral.

Cnidaria (the “C” is silent) is not a small, insignificant phylum. It contains approximately 10,000 species, at least 100 of which are dangerous to humans. The phylum name means “nettle” in Greek and its members include some of the most photogenic animals in the ocean: sea anemones, corals, sea pens, gorgonians and jellyfishes as well as the already mentioned hydroids. Most of these creatures are carnivores and have nematocysts used for defense and catching food. While Stylaster californicus has tentacles bearing nematocysts, they are too tiny to be harmful to humans.
S. californicus comes in several hues — purple, red, pink, orange and blue. According to The Living Bay: “The colors come from chemically altered carotenoid pigments [which] make their way up the food chain, possibly from diatoms via copepods. In the pink colony, the polyps contain oxygenated carotenoids. In the purple colony, one of these compounds is joined to protein.” Since the colors are bonded to the corals’ calcareous skeletons and are not in living tissues, they remain vivid even after death.
California hydrocoral colonies can be found at Farnsworth Bank, off the backside of Santa Catalina. Farnsworth was designated an Ecological Preserve for this hydrocoral in the early 1970s. You’ll also find colonies on the wall leading to The Arch (Santa Barbara Island); in shallow water off Gull Island (Santa Cruz Island); in many places on Cortes Bank; and at the Nine Fathom Spot, also known as The Coral Gardens (San Clemente Island).
Although California hydrocoral belongs to the lace coral family, Stylasteridae, and produces relatively flat branches, they are not the lace-like structures that give the family its name.
Unlike stony corals, California hydrocorals do not have zooxanthellate algae and do not use sunlight to synthesize foods from carbon dioxide and water. This means they can live in deeper waters, where sunlight doesn’t penetrate.
Close-up photos of hydrocoral show the minuscule pores containing polyps. Nonfeeding polyps (dactylozooids) are ringed by long tentacles with clusters of stinging cells. The tentacles protect the colony and catch prey. Within each nonfeeding polyp is a feeding polyp with four small, short tentacles around its mouth. These hydrocorals do best in areas with strong currents where the nonfeeding polyps can snag as many food particles and microplankton as possible for the feeding polyps.
The male and female colonies of California hydrocoral are separate. They reproduce in one of two ways: asexually by fragmentation, where a new organism grows from a fragment of the parent; or sexually, where male corals release sperm into the water that fertilizes eggs brooded by female hydrocorals. The eggs hatch into nonfeeding planula larvae that leave their mothers in late October or November. They don’t travel very far and settle nearby. If they are fortunate enough to land in a place with favorable conditions, new colonies will grow. Unfortunately, not many do.
A tiny parasitic snail, Pedicularia californica, is often found on CA hydrocoral. Closely related to simnias and cowries, it’s hard to see because its shell matches the color of its host. Other animals that are adapted for life on California hydrocoral include a commensal barnacle and a commensal polychaete worm.
California hydrocoral has been found as deep as 368 feet and as shallow as 15. The colonies may reach 12 inches in height and their bases may be 24 inches across. This hydrocoral occurs from San Francisco to Baja California and grows slowly — less than one-quarter of an inch a year. The branches are very brittle and, if broken, will not grow for about six months.
The author wishes to thank Genny and Shane Anderson for their help in the production of this article.
California Hydrocoral Stats
California Hydrocoral (Stylaster californicus)
Phylum: Cnidaria
Class: Hydrozoa
Subclass: Hydroidolina
Order: Anthoathecata
Suborder: Filifera
Family: Stylasteridae