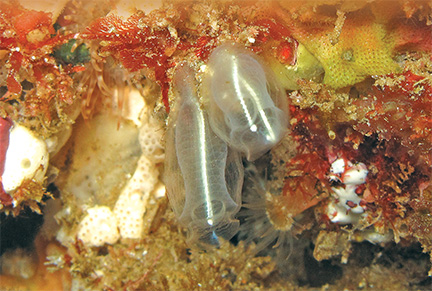 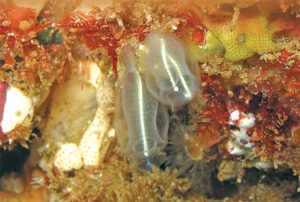 Of all the marine animals in the world, tunicates are vetebrates’ closest relatives and that includes the class Mammalia (us). Both tunicates and mammals are members of the phylum Chordata. Both have a notochord (a cartilaginous skeletal rod) when they are embryos. The notochord is lost as most tunicates grow older but it segments and turns into a backbone in mammals and other vertebrates.

Tunicates further belong to the subphylum Tunicata and the class Ascidiacea. The latter includes 2,500 to 3,000 species, about 90 of which are found off the West Coast. Tunicates are among the most common marine invertebrates and are named for their cellulose body covering, called a tunic.

While tunicates don’t have eyes (some have eyespots), ears (though there is an otolith to sense gravity or movement) or a nose, they do have a mouth, heart, stomach, intestines and gonads.

Filter feeders with a barrel-like shape, each tunicate zooid is attached to the substrate at one end. The other end has two siphons. Water is brought into the body via the oral siphon and passes through the branchial basket, where a mucus net traps food particles and oxygen. Water is expelled via the atrial siphon along with wastes from the digestive system. During spawning, both sperm and eggs are also released. Tunicates can expel water forcefully, hence the name sea squirts.

All tunicates can reproduce sexually. Colonial tunicates can also reproduce asexually by cloning or budding. While most tunicates are hermaphrodites they rarely self fertilize. Most solitary tunicates release both sperm and eggs and fertilization is in the water outside the tunicate. In most colonial tunicates sperm are cast into the sea and eggs are retained in the parent’s body, where they are brooded after being fertilized by sperm brought in with water via the oral siphon. The free-swimming tadpole-like larvae live only a few minutes or hours and don’t even have mouths. Their function, should they escape their many predators, is to choose a hospitable place to live and glue themselves to it, head down. After that they morph into adults and live about a year. Although many have poisonous flesh, tunicates are preyed upon by flatworms, opisthobranchs, snails and sea stars.

According to the Oyster’s Garter website, if a colony comes into contact with either its parent or a sibling colony, the colonies will fuse. Colonial tunicates can absorb and regenerate organs or even entire clones. If broken into fragments, they can reattach, grow and thrive. It should come as no surprise that tunicates are being studied by those involved in regenerative medicine. Tunicates may also be a source of chemicals that can be used to treat cancers and other medical conditions.

Most adult tunicates (including those pictured here) spend their lives attached to one place while others are pelagic and drift with the currents. The four tunicates discussed here represent two orders and three families. None are pelagic and except for the stalked tunicate Styela montereyensi, they are colonial.

Light bulb tunicate (Clavelina huntsmani): One of the two members of the order Aplousobranchia pictured here (the other is Pycnoclavella stanleyi), this tunicate is easy to identify. The tunic is transparent and two clearly visible internal organs look like the filaments in a light bulb, albeit one that is obsolete. The zooids can be two inches tall but less than .50 of an inch in diameter. Light bulb tunicates are common and appear to be seasonal, with fewer of them present in the fall. They are found from British Columbia to San Diego, from low intertidal waters to about 100 foot depths.

Branchial basket tunicate (Pycnoclavella stanleyi): Also called the social tunicate, P. stanleyi’s small zooids are about .75 of an inch long. They have seven rows of gill slits on each side. Social tunicates and light bulb tunicates produce larvae with an ocellus (eyespot) but no otolith. P. stanleyi prefers to live on low profile rocks with moderate to strong water motion and is found from British Columbia to Baja in waters no deeper than 30 feet.

Abalone shell tunicate (Metandrocarpa taylori): Every now and then some underwater creature causes a double take. That happened last year when I spied an abalone that seemed to have a bad case of the measles. Clinging to the underside of a rock, it was covered with tiny, bright red spots. Always fearless (besides, I’ve already had the measles), I moved closer — and discovered I wasn’t seeing a cross-species virus just a group of marine creatures. I later learned they were Metandrocarpa taylori, aka abalone shell tunicates.

The abalone shell tunicate is one of the two tunicates described here that are members of the order Stolidobranchia as well as the family Styelidae (the other is Styela montereyensis). Its dome shaped zooids are .08 to .75 of an inch long and bright orange or red. The zooids are connected to each other and the substrate by stolons (stems). The colonies can be up to eight inches across. Abalone shell tunicates also live on rocks and can be found from British Columbia to San Diego, in low intertidal waters down to about 65 feet. Usually orange or red they are “rarely green or yellow,” according to Guide to Marine Invertebrates, Alaska to Baja California.

Stalked tunicate (Styela montereyensis): This member of the order Stolidobranchia is one of the easiest tunicates to identify. It is a solitary creature attached to the substrate with a stem. From top to bottom it can be nearly 10 inches tall, though it is usually shorter. The reddish brown tunic has vertical ridges that may host hydroids and other organisms. Stalked tunicates prefer living in areas with moderate to strong wave action. They are found from British Columbia to Baja, in low intertidal waters down to about 100 feet.