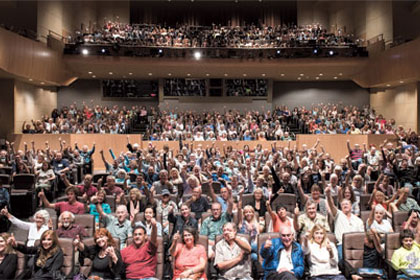 There’s More to Diving Than Diving

By Marty SnydermanNovember 17, 2015No Comments

Several weeks ago I was honored to serve as the Master Of Ceremonies for the San Diego UnderSea Film Exhibition (SDUFEX), a two-evening event in which the audience feasted their eyes and ears on a number of short films created by underwater videographers from all over the world. Produced by a hard-working committee of SDUFEX volunteers, and held in a beautiful state-of-the-art 500 plus seat theater at Qualcomm, this year’s show was the 16th annual. As has always been the case, there was a buzz of diving excitement in the air as show time approached.

Everyone knew they were going to witness some wonderful films ranging from exploring local kelp forests to diving with great white sharks, humpback whales and manta rays to scenes that reveal the secret lives of shrimps and gobies. Both evenings were a lot fun, and if I were to gauge success by the “oohs and aahs” and the applause of the audiences, both evenings were big hits.
As good as the films were, there was a lot more to both evenings than just the films themselves. After all, I suppose you could see a lot of scenes that were similar in many respects to those that were shared at the shows if you flipped on your television and sat down on your couch by yourself. But what you would not be able to enjoy in your home is the social aspect of being part of the diving community. Seeing and catching up with diving friends is why so many people got there early, stayed late, and went to after parties that lasted well into the evening. Attendees had a blast. Me too!
While this year’s shows are over, there are similar events and gatherings all over California throughout the year. A few are as well produced and well attended as the SDUFEX shows. Others such as the dive club meetings that are put on or supported by so many dive centers throughout the state are smaller in scope. But the benefits are much the same. Take part in those events, share some of your own still photographs or videos, enjoy some diving related entertainment and education, see some old friends, make some new ones, and plan some upcoming dives. That is part of the culture of diving that should not be missed.
I’d like to encourage you to take part in these gatherings in any way you can. Share your images, help produce a show or a club meeting, or just be a member of the audience. When you do, you will make some new friends, and that you will ultimately find yourself diving more, and enjoying your diving more.