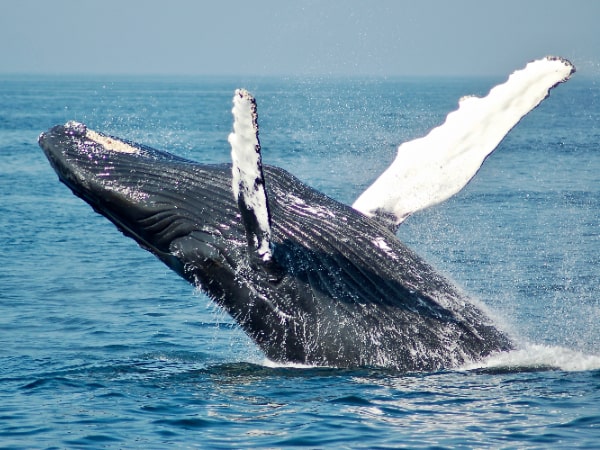 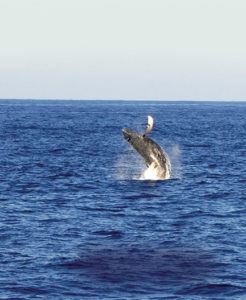 In last month’s Marine Life column we featured gray whales. This time we’ll spotlight humpbacks (Megaptera novaengliae). Blue whales will be featured in the next issue. All three of these are baleen whales — Mysticeti. Their cousins the toothed whales, which include sperm whales and orcas, are known as Odontoceti.

Humpbacks are among the easiest whales to identify. This can often be done even before the whale surfaces. That’s because the whales’ long pectoral fins usually have white undersides that shimmer as the whales move through shallow depths. You can see these from the deck of a boat. Also, humpbacks love to breach and those characteristic fins are unmistakable even from a distance.

Once a humpback is on the surface clues to its identity include serrated flukes, which can be 18 feet wide and have pointed tips. Look for a dorsal fin and a hump on the whale’s back. If you get close, you’ll notice a humpback’s head is covered with knobs.

Each whale species has a distinctive blow. This mist, composed of condensation and water, is exhaled through modified nostrils called blowholes. While toothed whales have a single blowhole, baleen whales such as humpbacks, grays and blues have two.

Like the other big whales, humpbacks were hunted nearly to extinction until 1966, when the International Whaling Commission issued a moratorium on commercial whaling. Now they are among the most abundant whales and can be found worldwide. Some estimate there are 30,000 to 40,000 of them.

The fifth smallest baleen whale, humpbacks can be more than 50 feet long and weigh an estimated 25 to 40 tons.

Research biologist John Calambokidis of Cascadia Research has been studying blue and humpback whales off California for 30 years. According to an article in the Cabrillo Marine Aquarium newsletter, TideLines (Fall 2016), Calambokidis, “started with photographic identification of individual whales, which now allows [him] to track most of the animals that feed off the West Coast. More recently he has been using various types of tags to open up the underwater world of these animals. This has included video cameras that provide unique views of how these animals feed and interact underwater. These tags have also become powerful new tools for examining the threats whales face off California.”

Like grays, humpbacks stay close to shore, looking for their favorite food (krill). Via email Calambokidis told me: “Humpback whales tend to go to specific feeding regions that they remain fairly loyal to and return to spring to fall. California represents one of these feeding regions and so animals seen off California coast are actually typically at their migratory destination and will stay through the spring, summer and fall though moving around to find the best areas to feed. They do of course migrate in winter to winter breeding areas (typically mainland Mexico and Central America for our California animals).” He added: “Our estimates are that the California-Oregon feeding aggregation of humpback whales numbers about 1,500-2,000 whales.”

Humpbacks are known for their songs. I have heard only one and that was in the Socorro Islands. We had seen the whales breaching and knew they were in the area. What I heard underwater, however, sounded like a motor at times. Engrossed in photographing eels and mantas at The Boilers, I didn’t pay much attention until I was back onboard the boat and someone mentioned the humpback song. Then I wished I had listened more closely. Songs can last 20 minutes and are repeated over and over. Only the males sing and they change the song over time. All humpbacks in a certain area sing the same song. No one knows why the whales sing or what these songs mean.

The author wishes to thank John Calambokidis along with Genny and Shane Anderson for their help in the preparation of this article.