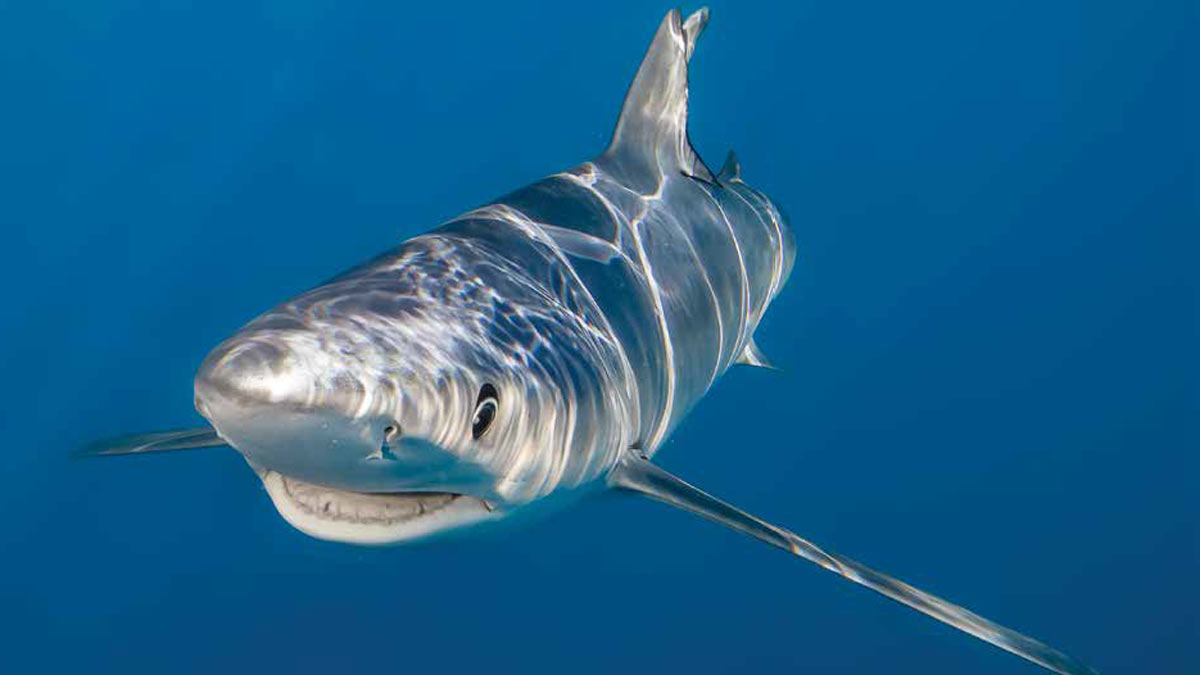 Adjectives such as graceful and gorgeous are not the typically mentioned descriptive terms when sharks are being discussed. But in the case of blue sharks, these modifiers hit the mark as many consider blues to be one of the world’s more beautiful sharks. When seen on sunny days in relatively clear, shallow water the brilliance of their shimmering indigo coloration is absolutely stunning.

For casual observers to hardcore image makers and everyone in between, encounters with blue sharks are highly treasured, eagerly shared and long remembered. During the 1980s a small industry focused their efforts on taking divers out into the open ocean to see and photograph blue sharks. At the time blue sharks were abundant in California waters, but sadly fishing pressures have greatly reduced their populations here and around the world and the once thriving cottage industry that centered around diving with blue and shortfin mako sharks has all but disappeared.

FAMILY: Blue sharks are described in the family Carcharhinidae, a grouping commonly referred to as requiem sharks. A requiem is a mass or hymn for a deceased human and is an obvious reference to the way humans have long thought of sharks. Worldwide, there are 59 species of requiem sharks described in 12 genera.

GENUS AND SPECIES: Prionace glauca
DESCRIPTION: Compared to many sharks, the blue shark has a relatively slender body, long conical snout, large dark eyes, and long narrow pectoral fins. While some sharks possess six or seven gill slits, blue sharks and other requiem sharks only have five. The eyes of a blue shark are equipped with a translucent eyelid called a nictitating membrane that can be raised to protect the eye from sharp objects such as the bones of its prey. The upper jaw is equipped with curved, triangular-shaped teeth with serrated edges that help blue sharks cut into and rip their prey.

Countershading is a type of camouflage that helps many open oceans species blend in with their liquid blue surroundings. When observed from above, the darker dorsal side of a blue shark blends in with the water below, and when potential prey or predators look up from below, the light stomach blends in with the brightly lit, lightly hued surface waters. Depending upon the light in the setting in which they are seen, the sides of the body can be bright blue, but they take on a darker and less vibrant appearance the deeper and darker the surrounding water.

According to fishbase.org, a typical adult blue shark grows to a length of seven to ten feet with the largest reported individual attaining a length of just over thirteen feet. The maximum reported weight of a blue shark is 453 pounds. Due to worldwide fishing pressure, it is almost certain that the average size of blue sharks has declined in recent years.

RANGE: Blue sharks have a circumglobal distribution in tropical and temperate seas and are believed to be the most widely distributed cartilaginous fish in the world. Individuals are highly migratory, a trait that makes what might seem to be a “local population” highly vulnerable to distant long-line and drift net fisheries. Tags placed in blue sharks off the coast of New York have been recovered as far away as Spain and Brazil. Blue sharks often inhabit water that is on or near the surface in temperate seas down to a depth of at least 500 feet. They tend to be in deeper water in tropical and subtropical seas.

HABITAT: Blue sharks typically roam the waters of the open sea where they sometimes aggregate over banks and in areas where food is available. Blues are known to come close to shore in areas where the continental shelf is relatively narrow, and at times are seen near the mainland coast and at the Channel Islands.

FUN FACTS: The diet of blue sharks primarily consists of a mix of small schooling fishes, pelagic crabs, and squids. Opportunistic feeders, blues are also known to consume the floating carcasses of marine mammals and trash from boats. Because blue sharks swim all day every day of their lives, efficiency in terms of energy expenditure is important, and this is reflected in their body structure. Compared to bony fishes, the density of body tissues is reduced in sharks. The less dense sharks are, the less lift required to maintain their position in the water column. In the water, blue sharks weigh only 2.5% of their weight in air, an extremely low density. Blue sharks easily cruise at that speed and have been clocked at a burst speed of almost 40 miles an hour, a speed that is almost seven times faster than Olympic swimmers.

As is the case with many species of sharks, loosely organized local populations of blue sharks tend to be segregated by sex. As a rule, in the waters of southern California divers and fishermen see almost all males in summer and fall, and almost all females in winter and spring.