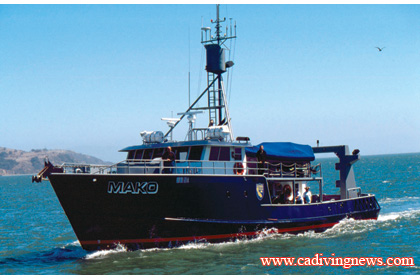 By California Diving NewsNovember 18, 2009No Comments

After 19 years of service with the Department of Fish and Game (DFG), the research vessel Mako will begin a new role in academia. In October, she will join the fleet of the California Maritime Academy (Cal Maritime), at its university campus in Vallejo.

The Mako is an 80-foot, steel-hulled, deep-sea trawler built for DFG in 1990. For nearly two decades she worked the California coastline from Cape Mendocino to the Mexican border, conducting surveys of California’s vital recreational and commercial finfish populations. The information gathered was used to help frame DFG policies and guidelines for California fisheries management.

The Mako’s size and configuration made her ideal for long trips at sea, but in recent years, DFG’s marine research focus has shifted to nearshore environments, which are more easily accessed by smaller and more fuel-efficient vessels. As a result, DFG staff explored other ways to make suitable use of the vessel.

The answer came from another state agency–Cal Maritime, a unique and specialized campus of the California State University system. Cal Maritime offers bachelors degrees in international business and logistics, facilities engineering technology, global studies and maritime affairs, marine engineering technology, marine transportation and mechanical engineering. It is one of only seven degree-granting maritime academies in the United States and the only one on the West Coast.

DFG Marine Region Manager Marija Vojkovich said moving the Mako from Southern California to the Bay Area to join the university’s fleet is an example of how state agencies can cooperate to make wise use of assets, even in tough economic times.

“While we hate to see her go, we are pleased that the Mako has found a new home where she will be used to her fullest,” said Vojkovich. “The Mako’s transition from research vessel to training vessel means that she will hopefully see many more years in service to the State of California.