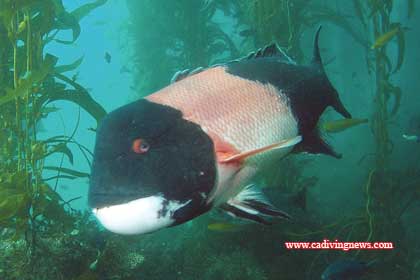 Sheephead: The Bold Rogue of the Kelp Forest

When I first came upon a male California sheephead, I thought I had wandered into the neighborhood of the local bully. The adult sheephead (Semicossyphus pulcher) are bigger than many fish of the Central and Southern California rocky reefs and kelp forests. With a big, blunt, black head, red mid-section, and black tail he looks at you with alert eyes, a sense of cool detachment and a mouthful of long, crooked teeth. Itʼs not just his appearance that is a bit intimidating, itʼs his attitude. If I hover relatively still, I have found it common for the male sheephead to approach closely to see what I was up to on his turf and if it will result in something for him to eat. I have had to shoo bulls away while working on a research installation or while counting organisms in a quadract. They have been known to attempt a nibble on the ungloved fingers of research divers.

A riddle: “I was your sister and I just became a father, what am I?” Thatʼs right, a California sheephead. These bold rogues are all born female. The mature females are demur, sleek, dusty rose or pink in color with a white chin. They are not as skittish as many rockfish, but they are not as inquisitive as the males, at least in my experience. Before developing the pink finery of the mature females, the young sheephead are brilliantly colored. Their red-orange body carries a white stripe down the midline and their fins have black spots. It is a rare treat to see the juveniles. The females become sexually mature at about year four. At the Channel Islands, the sheephead spawn during the months of June through September. After seven or eight years many of the females will transform into males and undergo the dramatic change in physical appearance. The ratio of females to males is generally about 5 to 1.
These fish grow slowly, taking between 10 to 20 years to reach 18 inches. Three feet is about their maximum length with large males weighing in at 20 to 25 pounds. Their territory ranges from Monterey Bay to Guadalupe Island and in the Gulf of California. Males have been found with an age calculated at 53 years; with females aged to 30 years. Sheephead are out and about in the kelp forest during the day where they use their strong jaws and those fearsome teeth to feed on sea urchins, barnacles, crabs, mussels, snails, worms and octopi. Fishermen have reported sheephead biting on sardines. They are found in the shallow waters beyond the surf zone to depths of over 200 feet. They sleep in sheltering caves and holes in the rocky reef at night. For further protection from predators, some will surround themselves in a mucus covering through the night. Sea mammals and giant sea bass prey upon sheephead. Dr. Milton Love, research biologist with the Marine Science Institute of the University of California, Santa Barbara reports seeing “harbor seals hold and eat them like ears of corn.”
Sheephead play an important ecological role in maintaining the health of the kelp forests where they live. Bordering the coastline of the mainland and the Channel Islands and rising from the subtidal rock formations are the beautiful “trees” of the Pacific commonly known as giant kelp, elkhorn kelp and bullwhip kelp. These brown algae provide a marvelous habitat for many species of invertebrates on the substrate and fish and sea mammals in the water column under the canopy of kelp. Within the marine community are several animals that feed or graze on the stem-like “stipes” of the kelp near the “holdfasts” where the kelp attaches to the rocky reef. These include snails, limpets and sea urchins. If uncontrolled, the urchins can decimate the kelp in the area where they feed. These areas, stripped of kelp are known as “urchin barrens.” They are barren because so many species lose their habitat when the kelp canopy is gone. In the waters of Central California, the urchins are kept in check by their major predator, the sea otter. South of Point Conception, it is the California sheephead, the sea stars and commercial urchin divers who control the sea urchin populations, helping preserve the kelp forest habitat.
The California sheephead is a very old species. Fossilized remains of its teeth and jaws have been found in deposits considered to be at least 10 million years old. The fish was an important food source for the coastal Native Americans. Its remains are found in the ancient Chumash refuse heaps known as middens. The Chumash name for this remarkable fish is “laxux.”
The next time you dive the California kelp groves, keep an eye out for the bold rogue of the kelp forest and donʼt be surprised if he cruises close looking like the bully of the reef.