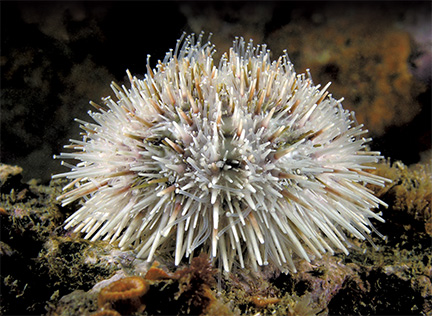 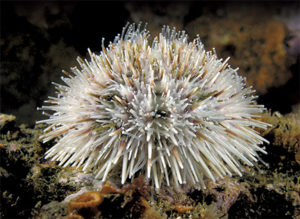 My introduction to sea urchins — on my first scuba dive — was a learning experience. I learned how easily their sharp, brittle spines pierce the human body. Most importantly, I learned to avoid contact with sea urchins, which is easy because the animals are sedentary, slow moving and not aggressive.

Sea urchins are classified as Echinodermata, which means “spiny skinned.” The 6,000 member phylum also includes sea stars, brittle stars, sea lilies and sea cucumbers. Seashore Animals of the Pacific Coast defines sea urchins as “spiny, globular or disk-shaped creatures without arms.” Five is a magic number when it comes to echinoid body parts. There is a complex set of five jaws, which form a structure known as Aristotle’s lantern. A sea urchin skeleton is called a test, with the mouth on the bottom and the anus on the top. The test is comprised of calcareous plates with 10 bands, five each of two types. Both types have different sized tubercles, to which the two different sized spines are attached. One type also contains many minute holes through which respiratory filaments and tube feet extend.

The hydraulically operated tube feet serve many purposes. They are sensory organs, though exactly what they sense is not known. The ends of the tube feet are generally suckered and used for a variety of tasks, such as gathering food or gripping the substrate. Working with the spines, they provide motion. They also serve as a main respiratory organ.

Sea urchin sexes are separate and spawning seasons/times vary according to the species. In all, however, eggs and sperm are released into the water simultaneously. If fertilization occurs, the eggs develop into tiny, bilaterally symmetrical (two sides with similar parts facing each other) larvae that drift with the currents before settling to the bottom and developing into adults with pentamerous radial symmetry, i.e., parts arranged in groups of five around a common center point. Besides man, sea urchin predators include sea otters, crabs, lobsters, sea stars and sheephead.

Although there are more than 700 species of sea urchins, just four of those found off our coast – white, purple, crowned and red – are the focus of this article.

The white urchin (Lytechinus anamesus) is the smallest and, in my opinion, most intriguing sea urchin found in our waters, with a test that grows to about two inches in diameter. It and the purple urchin decorate themselves with pieces of shells, rocks and kelp, which are held in place by tube feet. Since sea urchins have no eyes, I wonder how they choose what they “wear.” Is this determined by weight, size or texture? Can the urchin tell whether an item is living or dead? No matter how they are chosen, the decorations give the animal a rakish appearance. No one has yet discovered why urchins decorate themselves, though it could be for protection and/or camouflage or, in the case of small purple urchins that live in shallow intertidal waters, to prevent desiccation.

White sea urchins range from the Channel Islands to the Gulf of California, from shallow subtidal waters to depths of 1,000 feet. At certain times of the year, divers encounter large numbers of them but just why they aggregate is unknown.

The tests of purple sea urchins (Strongylocentrotus purpuratus) can grow to a diameter of three inches. In areas with a lot of surge, purple urchins often live in holes they’ve bored with their sharp spines and teeth. Both purple and red urchins are usually found in aggregations. Purple urchins and their roe are considerably smaller than red sea urchins and there has never been a large fishery for them. They are found from Alaska to Baja California and from intertidal waters down to 30 feet.

The crowned sea urchin (Centrostephanus coronatus) is twice as large (six inches in diameter) as a purple urchin. This species resembles the long-spined urchin found in tropical waters and ranges from the Channel Islands to the Galapagos, where it can be found from shallow waters to depths of 350 feet. While white and red urchins live out in the open, the crowned urchin lodges itself in crevices. The long, thin, serrated spines of this urchin are twice as long as the diameter of the test and a favorite refuge of bluebanded gobies. While the white, purple and red urchins prefer a diet of kelp, the crowned is described by Sea of Cortez Marine Invertebrates (1989) as “mostly carnivorous” and nocturnal.

The red sea urchin (Strongylocentrotus franciscanus) is SoCal’s largest urchin, with a test that can have a diameter of nearly eight inches. A commercial fishery for red sea urchin gonads has existed in California since 1971. It peaked in the early 1990s, when the diligent divers could earn $10,000 a week harvesting them. Urchin gonads (roe) are eaten raw. The price paid to fishermen is based on the roe’s size, color, texture and firmness, which are sampled when the urchins are harvested. Male gonads are yellow and have a sour taste while female gonads are red and sweet. The color of red urchins varies from bright red to dark purple or black and the animals can be found from intertidal waters down to 300 feet, from Alaska to Baja.

All SoCal urchins are members
of the same phylum, Echinodermata,
and class, Echinoidea.

Many thanks to Shane and Genny Anderson for their help with this and past articles.