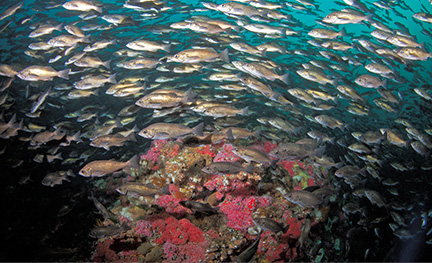 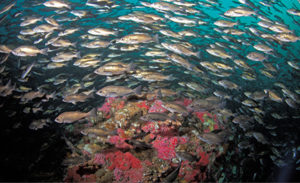 It was 1977 when avid diver, career scientist and intrepid explorer Dr. Robert Schmieder spotted Cordell Bank on a nautical chart. One sounding on the chart indicated that it was potentially diveable even though most of the bank was surrounded by deeper water. Schmieder saw an adventure, something to discover, and something very challenging that, to his knowledge, no one had done before. Scratching his “itch” to do more than just dive for fun, Schmieder set out to explore and discover a place that up until that point had never been seen by human eyes.

Schmieder’s quest to answer one question, “What’s there?” pushed the limits of scuba diving at the time. Over the next decade, he assembled a team of adventurous and willing divers to try and find what he considered a “needle in a haystack” and dive on Cordell Bank. Their teamwork, diving, photography, videography, and specimen documentation ultimately led to the designation of Cordell Bank National Marine Sanctuary (CBNMS) on May 24, 1989, protecting an ocean area of 529 square miles off the California coast. In 2015, NOAA expanded the sanctuary’s boundaries, resulting in protection of a total area of approximately 1,286 square miles.

“I pulled together and pulled along and pushed and carried the team, not unwillingly, but it was my obsessive driving interest to see this project through to what appeared by 1980-81 to be the potential for establishment of a national marine sanctuary,” Schmieder recalled in an oral history project interview. “It would have been wrong to do anything else.”

Cordell Bank National Marine Sanctuary is an extremely productive marine area off the west coast of the United States in northern California, just north of the Gulf of the Farallones. With its southern-most boundary located 42 miles north of San Francisco, the sanctuary is entirely offshore, with the eastern boundary six miles from shore and the western boundary 30 miles offshore. The sanctuary shares its northern and eastern boundaries with a portion of Greater Farallones National Marine Sanctuary.

Much like the land above the water, the geologic landscape of the sanctuary is active, varied and beautiful. The landscape is the cumulative result of millions of years of the earth’s history, involving the building and subsequent wearing down of mountains, movement during large and small earthquakes, changes in sea level, and the never-ending processes of wind and water erosion and deposition. The centerpiece of the sanctuary is Cordell Bank, a rocky granitic feature about 9.5 miles long by 4.5 miles wide located 22 miles west of the Point Reyes headlands, created as part of the southern Sierra Nevada mountains some 100 million years ago.  The bank consists of a series of steep-sided ridges and narrow pinnacles resting on a plateau 300 to 400 feet deep. The shallowest depth on Cordell Bank is 115 feet below the sea surface, yet only a few miles to the west, water depths reach 6,000 feet.

Diverse Habitats Below and Above

Cordell Bank comprises about five percent of the sanctuary area. A portion of the bank is composed of granite reef, but much of it is a mixture of rock reef, boulders, cobbles, sand and mud. The diversity of the bank and its habitats contributes to the wide variety of fishes and invertebrates found on this living reef. Invertebrate cover on the upper reef areas can exceed 100 percent as sponges, corals, sea squirts, anemones, and hydroids compete for space. More mobile invertebrate animals like decorator crabs, sea stars, sea cucumbers and snails move over and around this dense invertebrate carpet. The bank also supports more than 180 species of fishes, the most abundant being the rockfishes ranging in size from the 8-inch pygmy rockfish to the 3-foot yellow-eye rockfish.

The sanctuary is also home to 18 species of marine mammals with Pacific white-sided dolphins the most frequently sighted. Endangered humpback and blue whales are frequent visitors to the region in the late spring and summer months, gorging on krill and small schooling fishes. Gray whales pass through the sanctuary on their annual migrations between Arctic feeding grounds and Mexican breeding areas. The rare and endangered leatherback sea turtle is also a sanctuary visitor.

In the 1970s and ‘80s, Cordell Expeditions, an independent research group, began a process of exploration to characterize and document the bank. The sanctuary has been monitoring ocean conditions since 1997 and continues to learn about the uniqueness of this offshore ecosystem. The majority of research and monitoring in the sanctuary is conducted by the sanctuary or in partnership with universities, other state and federal agencies and non-profit organizations.

Technology has enhanced exploration of the Cordell seafloor environment has greatly improved with access to remotely operated vehicles, automated underwater vehicles, and high-resolution seafloor mapping. Sanctuary staff have conducted surveys in varying habitats throughout the entire sanctuary over the years, documenting what species use the sanctuary and the condition of the habitats. Explorations have covered rocky and soft habitats and most recently the deeper reaches of Bodega Canyon and the western slope of the sanctuary. New species discoveries underscore that we still have much to learn about the deep sea. In 2017, in partnership with the Ocean Exploration Trust, explorations launched from the E/V Nautilus ventured deeper into the sanctuary than ever before – over 8,000 feet – into Bodega Canyon and revealed deep-sea coral and sponge habitats thriving with a diversity of invertebrate and fish species.

The sanctuary also partners with Point Blue Conservation Science and the neighboring Greater Farallones National Marine Sanctuary to carry out at-sea monitoring looking at seabird, marine mammal distribution and abundance as well as oceanographic conditions and prey species. The Applied California Current Ecosystem Studies (ACCESS) program and other research efforts contribute to the understanding of various resource management concerns such as strikes of whales by large ships and whale entanglement; ocean noise; emergency oil spills or other incidents affecting water quality; effects resulting from global changes, including a changing climate and ocean; and marine debris. With each investigation, sanctuary staff gains new insight into the region’s habitats and biological communities, and how they are responding to changing ocean conditions.

Few divers have explored Cordell Bank National Marine Sanctuary due to its depth, currents and distance from the mainland, but staffers emphasize its importance in the marine ecosystem through education and outreach programs, working with the Sanctuary Advisory Council, scientists, users and others to encourage greater environmental awareness and stewardship. The nearby Point Reyes National Seashore, Bodega Marine Laboratory and the Oakland Museum of California feature sanctuary exhibits and interpretive displays. Professional development opportunities for teachers, including Teacher at Sea, offer trainings related to ocean conservation and marine sanctuary ecosystems. A traveling photo exhibit, a monthly program on community radio, field seminars, lectures and films are other ways the sanctuary reaches out to inform the public about this unique ocean jewel and to emphasize the importance of a healthy ocean in our lives.

Schmieder’s team concluded its research in 1985, and others took up the mantle of sanctuary designation, signed into law by President George H.W. Bush. Schmieder says he watched the designation process with a mixture of great pride that Cordell Bank would be protected and disappointment that it was no longer “his” secret place. “There’s no way I can adequately say how gratifying it is to see that what we did lives on,” he said.

The ocean supports hundreds of billions of dollars of the U.S. economy through food, jobs, transportation, recreation and other services. Assessing the conditions of ocean ecosystems in national marine sanctuaries can result in better management of those areas, both to maintain ocean integrity and health, and to support the ocean economy.

Looking ahead to the next 30 years and beyond, Dan Howard, sanctuary superintendent says improving the conservation, understanding, management and sustainable use of the sanctuary’s resources are among his team’s top priorities. “The ocean is changing rapidly, and it is our responsibility to understand those changes and manage sanctuaries to promote long term health of the ecosystem,” he said. “By acting as responsible stewards of Cordell Bank National Marine Sanctuary, we strengthen our nation now and for future generations.”

While Dr. Robert Schmieder’s Cordell Expeditions were the first to explore Cordell Bank with scuba, they weren’t the last. Bay Area Underwater Explorers (BAUE) is a nonprofit organization dedicated to the exploration and conservation of our planet’s underwater resources.

BAUE divers have been exploring and documenting many of the deep reef systems in and around the Monterey Bay area for the last 10 to 15 years, working with a variety of academic and government researchers to contribute observations, data and field work to ongoing research projects. Through years of advanced training and deep diving experience, BAUE divers fill an important gap in research coverage by exploring depth ranges (between about 130 feet and 400 feet) that are not very well covered; shallower ranges are well covered by scientific divers, and deeper ranges are reached using ROVs.

Recreational diving at Cordell Bank is recommended only for advanced divers with specialized training and equipment. The upper reef areas on Cordell Bank are between 115 and 140 feet (35 and 43 m) and Cordell Bank typically has strong currents that are extremely variable and can run in opposite directions at different depths. Sea conditions 20 miles (32 km) from shore can change rapidly. Fog and wind can develop quickly, making dive conditions treacherous. Visibility is variable and ocean temperatures usually hover around 50 degrees Fahrenheit (10 degrees Celsius). In order to protect the fragile reef community, anchoring is prohibited in areas shallower than 300 feet (91 m). A sanctuary permit can be obtained for research or education purposes.