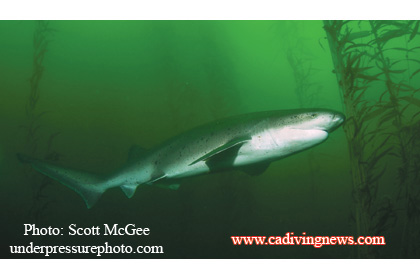 One of the first things we noticed upon reaching the bottom was absolutely no fish–anywhere. The lighting was also strange: a strange, yellowish-green tinge to everything, lending a deserted, eerie feel to the whole place.

But Dave and I had decided to forage eastward to see what we could find, so we plodded along the bottom, with Dave’s flash going off every now and then as he found some small, sessile life to photograph along the way.

We continued deeper and deeper into this spooky, yellowish-green ‘ghost forest’ with its odd, dearth of fish — failing to make an obvious connection in our minds: where had they all gone and why? Last week, this same area was overflowing with fish. Sometimes the fish sense something you don’t.

Dave and I were swimming eastward, about two meters apart, with Dave’s head down, photographing something on the ground, when suddenly I see a long, dark shadow materialize between us, moving at a good clip, in the same direction as we were.

It takes a second or two for my brain to register that this was a fast-moving shark right between Dave and me. By the time he had pulled slightly ahead of me, I see the characteristic long tail of the 7-Gill go right by my face, no more than two ft away.

By the time I frantically waved my light at Dave to get his attention, the shark has already moved on, deeper into the eerie, yellowish kelp forest up ahead of us. We pick up our finning speed a bit, hoping to catch up to it, to get some photos documenting its appearance.

Surprisingly, after a few meters, the long shark, at least two meters long, appears to have slowed down a bit and Dave and I were startled to find ourselves nearly abreast of this beautiful animal, no more than a meter from either one of us. Once again, it was between us. It reminded me of the old joke about: what does a dog that chases cars do with them, once he catches one?

We had suddenly found ourselves nearly nose-to-nose with this beautiful animal and now, were not quite sure what to do next. I can see Dave, just on the other side of the shark, frantically fumbling with his camera, trying to get it to focus properly and document our new visitor.

As for me, the shark is so close now I can count the spots on its back. These black freckles are a mark of the 7-Gill species and are not present on any other species that I am aware of.
We are not stationary: the three of us are all still moving forward, albeit at a slower pace, deeper into the gloomy forest.

By now, the animal has pulled slightly ahead of us, to the point where, the tail is now passing about half a meter from my face. Dave is still furiously clicking away with his camera.

Here, I do the unthinkable, being powerless to resist the beauty of this animal: I reach out and ever so gently just tap the tail as it passes by. The reaction was surprising.  I had expected it to barely notice my touch; instead, the shark suddenly shoots upwards and away from us, as if I had touched it with a red-hot poker. It was gone in a flash. The tails must be sensitive! Now, I already know it’s not wise to touch sharks. I just succumbed to temptation in a moment of weakness and I’m not proud of it. It was a temptation I just could not resist and I am being honest about it.

But, here is the interesting thing: our other dive buddies were diving in the same general area we were, about 300 meters northwest of us. We haven’t worked out the exact times yet, but we think that the animal jetted off from Dave’s and my location, to appear to Jackie and Peter, because they saw him on their dive as well, a short time later.

There are several possibilities here: 1) that there were more than of this species of shark in the area; unlikely, but not impossible– that the two dive teams actually saw different animals, 2) That it was the same shark which traversed the distance between the two dive teams and visited each team of divers separately.

I tend to lean towards the second of the two as the more likely–that our encounter with the animal startled it in the direction of the other two divers, who then reported seeing it a short time later.

In any case, my dumb stunt touching the tail notwithstanding, it was a remarkable encounter, one that left both Dave and I shaking with adrenaline for quite a while afterwards.

These are truly beautiful animals to see in the wild. We can’t know for sure, but we think they may be migrating northward from the Point Loma area, towards the La Jolla area, where they are being seen in increasing numbers.