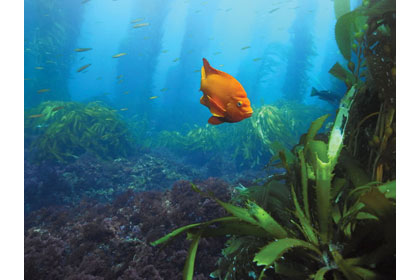 Except for having to dissect a frog, I enjoyed high school biology. As an adult, however, I have found marine biology even more fascinating. Reproduction specifically. I had no idea it could be so complicated under the sea. Take, for instance, nudibranch mating and egg laying.

Over the years I have taken photos of a lot of things I could not positively identify. Among them were egg cases. Figuring out the source of some of them was easy because the parent was in the photo (oh happy coincidence!). The IDs of those shown here — without a parent — are the expert opinions of scientists.
Like land slugs, their close cousins, nudibranchs move slowly and only live about a year. You can imagine how hard it is for them to find a mate in the ocean. Nature, however, has equipped them with everything they need to mate with any nudi of the same species they come across. They only need to find just one to pass on their genes to the next generation. When a nudi does find that special slug, mating is easy. Nudibranchs are hermaphrodites. The male organ is stored in a sac on the right side of the head, next to the rhinophore. The female port is just above the mid point on the right side. The creatures do a little dance to position themselves right side to right side and head to tail so the male organs align with the female ports. (In case you wondered, nudis do not self-fertilize.)
Mating takes five to ten minutes. Sperm is stored until the eggs develop and are ready for fertilization. After that, each nudi lays an egg case that is unique to its species. Those of dorids are always ribbon shaped and usually yellow or white. Egg cases of aoelids are string shaped and may be white or a pastel color. Those of the purple nudibranch (Flabellina iodinea), also known as the Spanish shawl, are pink. The Spanish shawl not only obtains its body color by eating a specific hydroid, it attaches its eggs to it.
Aeolid egg strings can be laid in a circular pattern or attached to a hydroid or other organism — or not. Sometimes they are just in a pile. Most dorid egg ribbons, however, are constructed with the precision of an engineer. They are equidistant counterclockwise spirals. Sometimes one edge is attached to the substrate, sometimes one end. The ribbon begins on the outside and the spirals get ever smaller. That dorids cannot see and have eyespots that sense only light and dark makes their egg ribbons even more remarkable.
Nudibranch eggs are in capsules, which are embedded in a gelatinous substance for protection. There can be thousands. While it depends upon the temperature, it usually takes about a week for them to hatch. The resulting baby nudis — called veligers — have a shell that surrounds their digestive tract, much of their nervous system and their excretory organs. These larvae drift with the currents and eat plankton for several weeks before settling down on the substrate and morphing into adults. They lose their shells in the process. The impetus for metamorphosis is thought to be environmental, i.e., perhaps a chemical released by the nudi’s favorite food. Most nudis have a specific diet, which makes them difficult to keep in an aquarium.
Illustrating this article are photos of aeolid egg strings and dorid egg ribbons. Please keep in mind that only those egg cases with the parent in the picture are positively identified, the others are educated guesses. According to UCSB’s Jeff Goddard, “The egg masses of many species of California nudibranchs are distinctive and can be readily identified to species. However, there’s so much overlap in shape, color, and size of others, that even after decades of experience working with them, I find identification of many difficult without the adults nearby.”
The author wishes to thank UCSB’s Jeff Goddard, as well as Genny and Shane Anderson, for their help in the preparation of this article.
Aeolid/Dorid
Stats
Phylum: Mollusca
Class: Gastropoda
Subclass: Opisthobranchia
Order: Nudibranchia
Suborder: Aeolidina/Doridina