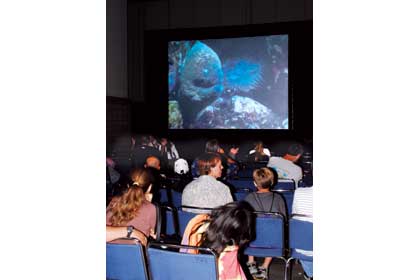 By California Diving NewsJanuary 24, 2012No Comments

Assemble your best underwater video film footage now for the SCUBA Show 2012 underwater film festival. The 25th annual SCUBA Show is the largest dive expo of its type in the U.S., and this year it takes place the weekend of May 5-6 at the Long Beach Convention Center.

One of the most popular portions of the annual Southern California SCUBA Show has been the unique continuous film festival. Films will be projected digitally in HD on a massive screen and viewed by thousands of attendees. Featured at past film festivals have been footage and films from some of the world’s greatest underwater cinematographers. Even so, some of the most well received films have been from non-professional and semi-professional underwater camera operators.
For this year’s show, the film festival will be wide open to this talented group. The management of the popular annual dive convention is conducting an aggressive all-out search for the best in underwater video films. They are also opening up the category to include digital still presentations set to music or narration. Footage can be from anywhere in the world. Those films accepted for screening will be paid an honorarium.
Deadline for DVD submission is March 1, 2012. For a complete guideline sheet on submissions view the guidelines web page at www.scubashow.com/filmguide.