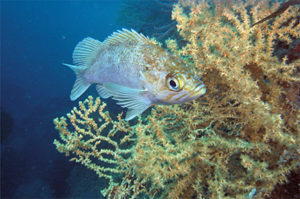 Skill Level: All dependent on sea conditions and currents.

Access: Boat only. Professional charter boat recommended. There are several out of Ventura and Santa Barbara. Private boat launch ramps are available at these same harbors as well as Channel Islands Harbor.

When is something on fire but underwater? When it is on fire with color! Such is this dive site on the backside of Santa Cruz Island. A good distance from shore, rising sharply from the bottom and bathed constantly in clear but life-giving currents, this dive site is simply exploding with bright, beautiful aquatic color.

Not every square inch of this reef is covered with marine life, but rather it appears almost as if it is a manicured natural garden with beautiful flowers planted here and there and colorful butterflies and birds flitting about.

The warm-colored “flowering bushes” are provided by substantial stands of golden and red gorgonian. Their “branches” extend into the current feeding off the microscopic organic particles drifting by. Gorgonians are not plants but colonies of animals made up of thousands of tiny polyps. On the red gorgonian branches the white polyps give the colony an appearance of pink. They are an excellent photo subject in and of themselves but also make a good backdrop for fish and diver photos.

Colorful fish life abounds, including many pink female sheephead. The larger tri-color males are small or lacking probably because this area is open to hunting and the reef is easily found. Bright orange garibaldi are present but not in numbers like nearby Anacapa Island or Catalina Island to the south. Another touch is added by multitudes of golden cigar-shaped señorita fish. Darting across the reef are scorpionfish, painted greenlings and ghost gobies. A variety of rockfish also provide interesting viewing.

A member of the rockfish family and favorite of many photographers is the yellow and black striped treefish with its saucy red lips. It is thought that the red lips are a territorial display to warn other treefish off the same plot of reef. Because treefish are nocturnal and out and about more at night, you may find the redness of their lips to be more pronounced when illuminated in the darkness. The juveniles lack red-colored lips, but have bodies colored bright yellow.

You will find the invertebrates that dot the reef, however, provide the best color. Stars dominate. The variety is outstanding with the contrasting colors and fascinating textures of leather stars, ochre stars, bright rainbow stars, blood stars, bat stars and more. Other invertebrates include luxuriously red strawberry anemones and patches of corynactis anemones in the hues of pink, lavender, and yellows. Nudibranchs are prolific here as well; the dorids being the most dominate. The yellows are especially plump, bright and numerous. This is a great nudibranch dive.

The reef itself has good, although not spectacular structure. There are plenty of cracks and crevices to explore. The sand and mud sea floor is at about 65 feet depending on location. The bottom then rises sharply in jumbled boulders and a few mini-walls. The reef peaks out with pinnacles here and there at 40 feet down. Average dive depth is about 50 to 55 feet. Kelp is present but generally thin. While the reef size is not huge, it is substantial enough that even a full charter boatload of divers can be dropped in on the reef and everybody will still have his or her own large “plot of land.”

If you are foraging for seafood this spot is not the best. There is an occasional lobster or rock scallop. Spearfishing is poor with the exception of chancing on a large halibut in the sand surrounding the reef.

Although good, Santa Cruz Island is not noted for its stellar water clarity. Flame Reef, however, is an exception. Visibility is quite good over these rocks. This is owed to its distance from shore and a steady current, usually west to east. It is typically not too strong but can come up suddenly, so be prepared with a current line trailing behind your dive boat.

With its vivid colors this is a dive site for photographers or divers seeking underwater creatures to delight the eye. Flame Reef will set ablaze a passion in your heart for the beauty of the sea.