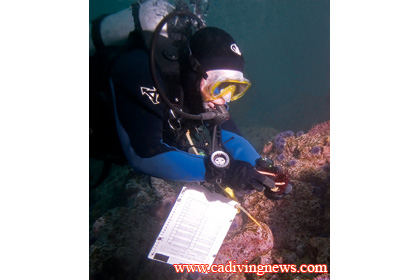 By Scott MarshutzDecember 8, 2008No Comments

Over the years, numerous efforts to monitor California’s marine resources have been made by government, academic, private, and nonprofit institutions. Since most groups use different methods, focus on different target species, and have different data reporting formats, it was virtually impossible to perform statewide analyses. As a result, the snapshot of California’s rocky reef ecosystems was out of focus.

Enter Reef Check Foundation, the worldwide reef monitoring organization, which created the California Monitoring Protocol. Developed in collaboration with marine biologists throughout the state, key vertebrate and invertebrate species were identified. “Some of the questions we asked were: what are the species we fish, and what are the organisms we impact?” explains Craig Shuman, director of Reef Check California (RCCA). “We wanted to concentrate on the things we could change through management actions.”

The protocol was designed specifically for volunteers because not enough resources were available through the state or private sources to pay for professional scientists to collect the data needed to successfully manage the state’s coastal marine resources, which have been damaged by runoff and over fishing.

While divers are encouraged to volunteer, the four-day training course is by no means a leisurely swim through a kelp forest. “At the end of the classroom session, divers take a species ID test [30 species of invertebrates and 29 species of fish] and a written test,” Shuman explains. “And then we go into the field—everybody swims the same transect. If I count 24 bat stars, you have to count somewhere between 20 and 28 or we keep practicing.” Says volunteer Claudette Dorsey, a registered nurse from Hermosa Beach, “It’s a complicated dance to count fish in 6 to 10 minutes while laying a 30 meter transect—maintaining a compass heading and depth contour—and tracking my buddy, while recording observed fish based on size, species and, sometimes, gender.”

The program is making headway. Experienced volunteers are now leading survey teams without staff supervision. RCCA is also working with dive clubs, such as the Bay Area Underwater Explorers in Monterey, as well as integrating its training into university programs. Humboldt State University, for example, is teaching it as a semester-long course. Getting more universities to teach Reef Check’s curriculum enables the data to be studied by large numbers of educators and professionals.

Bill Field, a dive master and assistant instructor with the Sonoma State NAUI Diver Training Program, got involved after his son Avrey convinced him it was something the California coast desperately needed. “The data we collect combines with the data of all Reef Check divers to help create a more accurate and necessary perspective of the interplay between humans and the ocean environment,” says Field.

Using Reef Check’s online system, comparisons will soon be done in near or real time, which sets RCCA apart from how academic research is typically conducted. “We want our data out there,” Shuman says. “We want people to use it.”