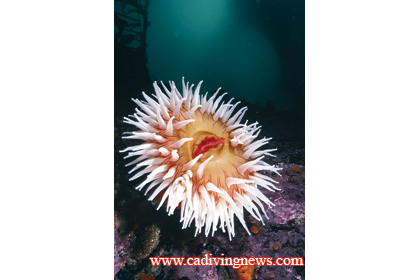 One of the most conspicuous inhabitants of California’s middle and deep reefs is the fish-eating anemone. This striking anemone has a bright red column with long white (although sometimes red) tentacles, and a yellow to off-white, to golden oral disk with red striations. These colorful invertebrates are very photogenic and can be easily identified. They are found from Alaska to San Diego, on rocky outcroppings or walls from the low intertidal down to about 160 feet. Fish-eating anemones are rather large and can be over eight inches across, not including tentacles.

All anemones belong to the Cnidaria, a large phylum comprised of over 9000 individual species. All possess a mouth surrounded by stinging cell laden tentacles. Anemones, hydroids, jellyfish and both soft and hard corals are Cnidarians. These are ancient animals and are represented among our earliest fossil records, and those are 580 to 540 million years old. All anemones are grouped within the class Anthozoa, which also includes corals, and the order Actiniaria, the anemones. Anemones are simple animals. Their bodies are basically a sac that functions as stomach, intestine and reproductive gland. Their mouth is also their anus.

Scientists once named the fish-eating anemone Tealia piscivora, but reclassified these animals about 20 years ago and now call them Urticina piscivora. The genus Urticina has 13 members, 5 of which may be found in California’s waters. Urticina is Latin for nettle, a stinging plant. Piscivora translates into “fish-eating.” Commonly, they are called rose anemones, Tealia anemones, but most commonly, fish-eating anemones.

Anemones can reproduce both sexually and asexually. During asexual reproduction the animal simply splits in two, creating a genetically identical copy of itself. There are boy and girl anemones and they are broadcast spawners—they release sperm and eggs into the water column. When these get together, the little anemone that is produced settles on a rocky bottom and begins to grow. Anemones do not have a pelagic stage, unlike other Cnidaria.

Most of us think of anemones as being sessile and not capable of moving from their position on a rock. This is not true and all anemones are capable of motion and get around in two ways. They can actually crawl along a rock! This process is painfully slow, and requires time-lapse photography or observing an anemone over extended periods of time. They are also capable of inflating themselves, detaching themselves from their rock, and rolling along the bottom with the current. The latter is used to avoid predators, principally starfish, or to find a new rock with a better food supply.

All anemones have stinging cells on their tentacles that they use for catching dinner and for defense. These contain nematocysts—miniature harpoons that deliver a toxic injection. These are lethal to small animals, but only painful or annoying to humans, although the sting of some Cnidarians is lethal to humans.

This species prefers to dine on shrimp and small fish, and this preference is how it received both its common and scientific name. One fish species, however, the painted greenling (Oxylebius pictus), has been observed lying unharmed in this anemone much as clownfish do in tropical anemones.

Who would have thought that such a seemingly stationary creature would have such a complex natural history? On your next dive, try watching them and see if you can catch them in the act of catching a fish.