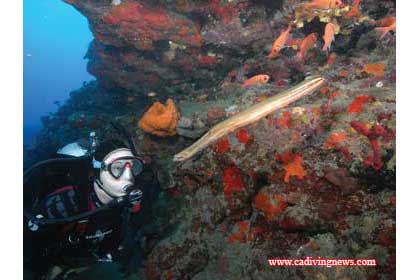 Out Of Air — Simply Unacceptable!

By Ken KurtisFebruary 17, 2011No Comments

Let’s start with this: Running out of air is the single stupidest thing that a diver can do. It’s eminently preventable and new research indicates that it might drastically increase your chances of becoming a fatality statistic.

A recent D.A.N. study looked at 947 fatalities over a 10-year period. In roughly half of those cases, the initial trigger–the problem that started everything on a downward spiral–was identified. In 41% of those instances, out-of-air was the culprit.
And let’s debunk a myth right now: These cases do NOT involve equipment failure. Out-of-air results from divers not paying attention. It’s diver error, not equipment failure, that’s killing people. And that’s something that’s changeable.
There are no reliable statistics on how often divers actually run out of air. But I believe there’s absolutely no way divers run out of air on 41% of their dives. The reason that’s significant is that, statistically, you’d expect a direct correlation between how often a behavior occurs and how often it produces the outcome you’re measuring.
For instance if we knew that 80% of the Southern California dives occurred from boats and 20% occurred from shore (I’m making these numbers up), you’d expect that 80% of the fatalities would come from boat dives and 20% would come from shore dives.
But in the case of out-of-air, we have a behavior that seems to be relatively rare (less than 1%?) that produces an inordinately high (41%) number of the fatalities. Specifically, if out-of-air is a relatively rare occurrence, the fact that it produces a significant percentage of the fatalities likely means that running out of air is far more dangerous behavior than we think it is.
So why do divers still run out of air? There could be a couple of reasons.
One may go back to initial training. Part of the problem may be that while we admonish you not to run out of air, at the same time we tell you that if you do exhaust your gas supply, you’ve got some options (buddy breathing, octo breathing, and free ascent). It’s a mixed message.
And that may inadvertently put into divers’ minds that even though we SAY don’t run out of air, it’s not the end of the world… because you have options. We further imply that it’s relatively easy to make a successful ascent to the surface. But the data indicates that the reality may be far different from the perception. When you look at the fatality numbers, saying “run-out-of-air-and-you-stand-a-good-chance-of-dying” is probably more honest than saying “you-have-easy-to-master-options.”
Look at it this way: There are roughly 100 dive fatalities reported to D.A.N. each year. If we could eliminate running out of air, we would reduce the number of annual fatalities from 100 to 59 immediately. It doesn’t involve anything more than (1) Getting divers to pay better attention to their gauges, and (2) Changing the mindset of the diving community that running out of air is an inconvenience with acceptable options and isn’t the end of the world. For a number of divers each year, it IS the end of their world.
People needlessly die every year because they don’t pay attention and they run out of air. How many more people have to die before we decide this an unacceptable but solvable problem and all we need is the willpower to attack it?