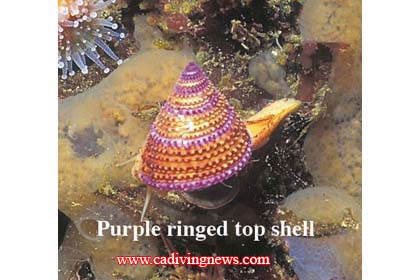 Jewels of the Sea: California?s Most Photogenic Sea Shells

In the early years of my diving career I collected shells (a long time ago). That stopped when I learned how to photograph them. This was much more rewarding, allowing me to record not only the shell’s appearance but the animal that lived in it and behaviors such as mating and laying eggs. No longer alive and removed from their habitat, many shells lose their luster—but photographs preserve their beauty forever.

California waters contain a variety of seashells, some of which are exquisite. This does not mean they are worth big bucks. In the world of shell collecting, rarity is what determines value and, thankfully, most of the gastropods found in California waters aren’t rare.

Our prettiest seashell—in my opinion—is the purple ringed top shell (Calliostoma annulatum). Beaded rings of purple, gold and orange decorate this tiny shell, which ranges from .40 inch to 1.18 inches tall. It is found from Alaska to Baja California. In my experience, the farther north this shell lives the larger it grows. Those found in the Northern Channel Islands are bigger than those found in the Southern Channel Islands. The head and foot of the animal are gold, with irregular patches of brown.

A close cousin of the purple ringed top shell is the Norris top shell (Norrisia norrisi). When young, the shell is a shiny chestnut with a splash of black on the umbilicus and chartreuse on the columella. The shells of older animals are covered with growth that includes barnacles and calcareous algae. The animal can be orange or scarlet with black accents and blue eyes. This shell has a round operculum that looks like a flat, coiled rope. The mantle has fleshy filaments (they look like tentacles) that serve as sense organs.

The most striking feature of the queen tegula (Tegula regina) is the umbilicus, which is bright yellow, accented with an orange semicircle. The animal’s head is yellow; the tentacles are orange. The foot is yellow and black. The little gray shell (two inches tall max) is shaped like a pyramid, with layered vertical ridges on the sides. Bluish-gray ridges radiate from the umbilicus. The queen tegula is only found from Catalina to central Baja. The mantle of this shell also has fleshy filaments that serve as sense organs and an operculum that looks like a flat, coiled rope. The queen tegula is thought to be a vegetarian. Its eggs are released into the water and free-swimming larvae hatch from them.

Chestnut cowries (Zonaria spadicea, previously Cypraea spadicea), like others of its species, are noted for their smooth, glossy shells. The surface is cleaned and repaired by the mantle, which secretes the shell and can completely cover it. The mantle is white, with brown warts; the foot is brown and white and the tentacles are red. The color of the shell varies and depends upon the snail’s diet, which is thought to be tunicates and hydroids. Chestnut cowries are found from Monterey to central Baja California and range in length from 1.5 to 2.5 inches long. The sexes are separate and when the eggs hatch, the free-swimming larvae ride the currents.

A close cousin of the cowrie, our next beauty is the simnia (Neosimnia arcuata, previously known as Simnia vidleri). Photographers discovered this shell in the early 1980s and many incredible shots were taken of it. At the time, I was dating a boat captain who plied the Southern Channel Islands (mainly Catalina) so that’s where I dived. I swear, the second skipper and I examined every gorgonian seafan we could find off that island without finding a single simnia. When my relationship with the captain ended and I was once again diving the Northern Channel Islands, I saw simnias everywhere.

While the shell is glossy and very pretty, the animal and its mantle are equally attractive, white or golden-white with bright red markings. Like the cowrie, neosimnia mantles have warts, in this case white ones. This shell is tiny, only two-thirds to three-quarters of an inch long. Simnias live on red, orange, brown, golden and purple gorgonians, eating the polyps and laying capsules, each containing several hundred eggs, on the branches. The young hatch as free-swimming veligers. The shell matches the color of its seafan host. Simnias are found from Monterey to northern Baja. Seashells of North America says, “The male controls a major part of the seafan upon which he lives and will ward off other males that encroach upon his territory.” A territorial seashell—who knew?

Glossary of Seashell Parts
Aperture: Shell opening.
Columella: The pillar around which the whorls form their spiral circuit.
Mantle: The outer covering of the soft parts of a mollusk. It secretes the substance that forms the shell.
Operculum: The “trap door” that covers the aperture when the animal is inside the shell.
Umbilicus: A small hollow at the base of the shell.