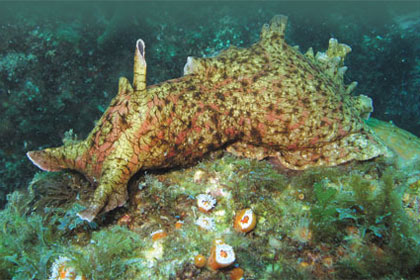 During a late afternoon dive several years ago in Fiji, I came across a sea cucumber (Bohadschia graeffei) that was upright and swaying like a cobra dancing to a snake charmer’s tune. That was very strange and I didn’t know what to make of it. I watched for a while, swam away, then came back, intending to photograph the sea cuke’s mouth and the tentacles surrounding it, which were black with flat, leafy white tips.