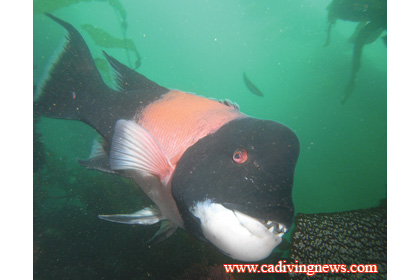 How to Photograph Sheephead

By Dale ShecklerJuly 24, 2009No Comments

One of the more colorful reef fish of Southern California is the Sheephead (Semicossyphus pulcher). Fairly common, they are a good photo subject for beginning and experienced underwater photographers. Sheephead are an interesting creature. Being a member of the wrasse family, they are related to rock wrasse. Both of these fish are hermaphrodites starting their lives as females and eventually maturing to males. All phases of this fish are photographic but not all phases are easy. Finding all the phases in full regalia is not always simple and each holds a different photograph challenge.

The juvenile phase sheephead is the most striking but the most difficult to photograph. Juveniles are bright pink to red or even orange and sport a white stripe down the center and black spots on the rear of the dorsal, anal and base of the tail fins. They are six inches or smaller and rarely sit still and that is the problem — they seem to be in constant motion. While you can get by with your camera in a standard lens mode, you are better off with a mild telephoto, sometimes in the macro setting if you can get close enough. A supplemental strobe or strobes are a must to bring out the full color this small fish has to offer. Shoot with a higher shutter speed if possible to freeze their constant movement. The key for getting a shot is to simply shoot, shoot and shoot some more.

Female sheephead are the easiest phase to photograph, simply because this phase is the most common and the least shy. They are pink to pinkish-gray and vary between 6 to 12 inches long. Drawing in female sheephead close enough to photograph can be as simple as breaking up some urchins to feed them but this technique has it problems. First, if you are in a preserve you can’t do that. Second, It puts a lot of debris in the water clouding photos and encouraging unnatural behavior that often comes through in the photos. And finally, is it really kosher to kill an animal to achieve your photograph ends? A better technique is to grind or bang two rocks together. This is like ringing the dinner bell and they will come running. A standard lens at a standard focal length will work well, but you may want to switch over to macro and get in close on occasion for dramatic face shots.

The big males are the most fun to photograph. With four color zones — a white chin, black head, pink or orange body and black tail getting just the right lighting and exposure on the male sheephead can be challenging but richly rewarding because of its dramatic coloration.

If this were not enough, the big male sheephead with sharp buckteeth and bulbous head are uncommon and shy. As with the females the best technique to draw them in is by banging and rubbing rocks together. There are three areas that seem to have the most consistent sightings of the large and most photographic males. The first is in the Avalon Underwater Park on Catalina Island. The long-established marine preserves on the frontside of Anacapa Island are another good area where these slow to mature animals have been allowed to grow unhindered. And finally the outer Channel Islands hold some fairly large specimens, although they tend to be shyer.

Taking into consideration the male sheephead’s multiple coloration the best way to photograph them is against a blue water (or green water, whatever the case may be) or light colored kelp background. This will make all portions of the fish stand out. If the background is dark or black, you will lose a good portion of the fish in the background. Conversely, it is easy to overexpose the sheephead’s white chin. Be careful not to “blow out” your exposure with your strobe. Frankly, it is a challenge to expose the black head and tail to show texture and still not over expose the chin. Bracket your exposures carefully by fine adjustments of your strobe.

This summer sheephead will be entertaining divers up and down the Southern California coastline with their antics thinking they are the kings of the reef. With some proper photo techniques and tricks you can gain some stunning images.