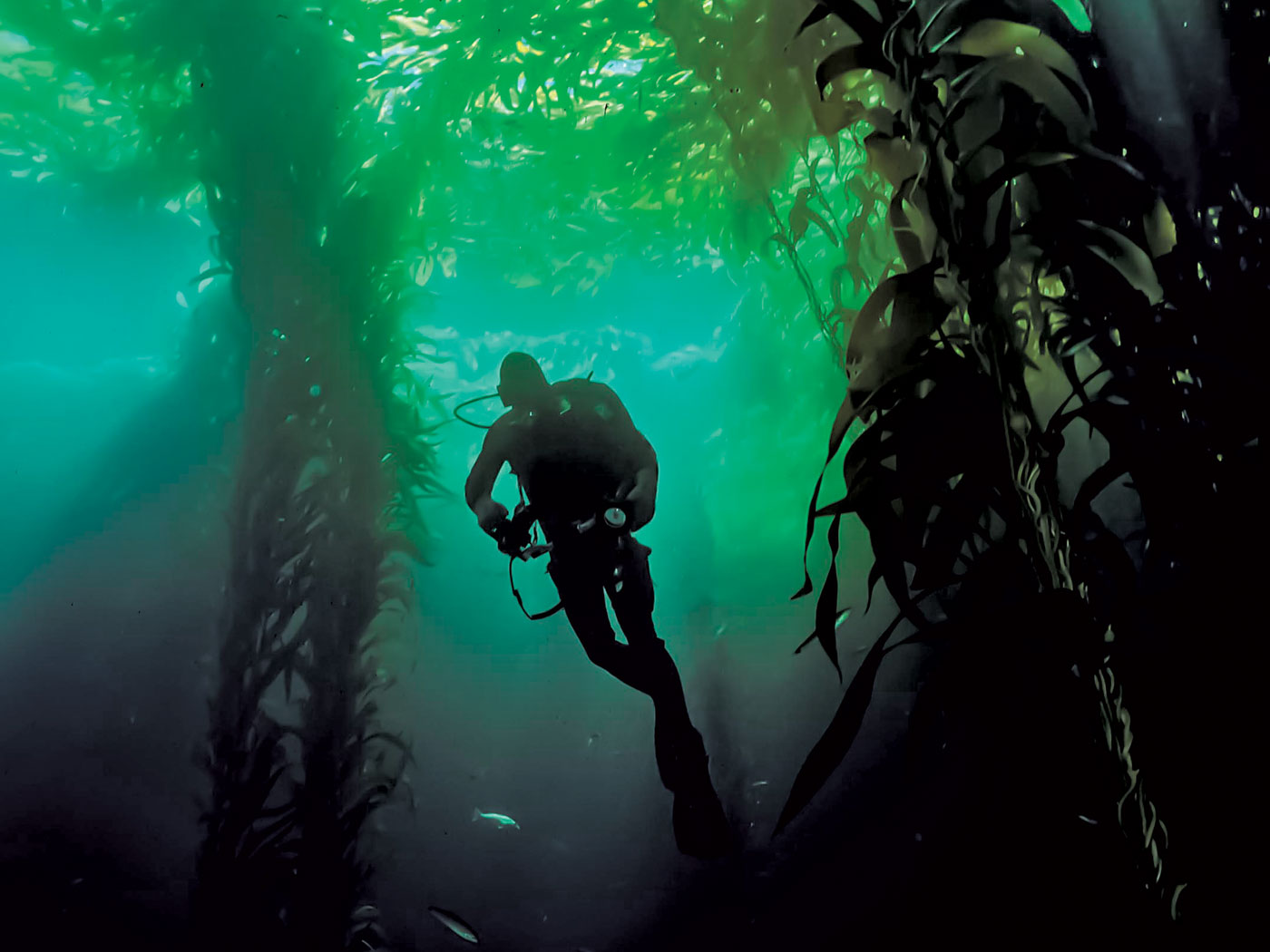 The mere mention of an upcoming trip to a tropical destination will almost certainly capture the attention of California divers. The warm, clear, seas alive with the tropical jewels found in flourishing coral reef communities can seem like another world to those whose typical diving buddies are garibaldi and California sea lions swimming in the often greenish waters of giant kelp forests where colder water requires an accessorized 7mm wetsuit or a drysuit. While those are some of the obvious differences between kelp forests and coral reef communities, there are also a number of significant similarities. Let’s dive in and take a look around!

When you slip below the waves on a day with favorable conditions, you enter a world where shimmering rays of sunlight magically dance through a towering golden forest. Eye-catching fronds stand out against a beautiful background of blue-green water while the undersea forest rhythmically sways back and forth in perfect synchrony with the water’s ebb and flow.

In addition to their stunning beauty, California’s kelp forests are among the most productive ecosystems in the world. They serve as homes, places to hide, attach, and rest as well as sources of food, breeding grounds, and nurseries for many species. 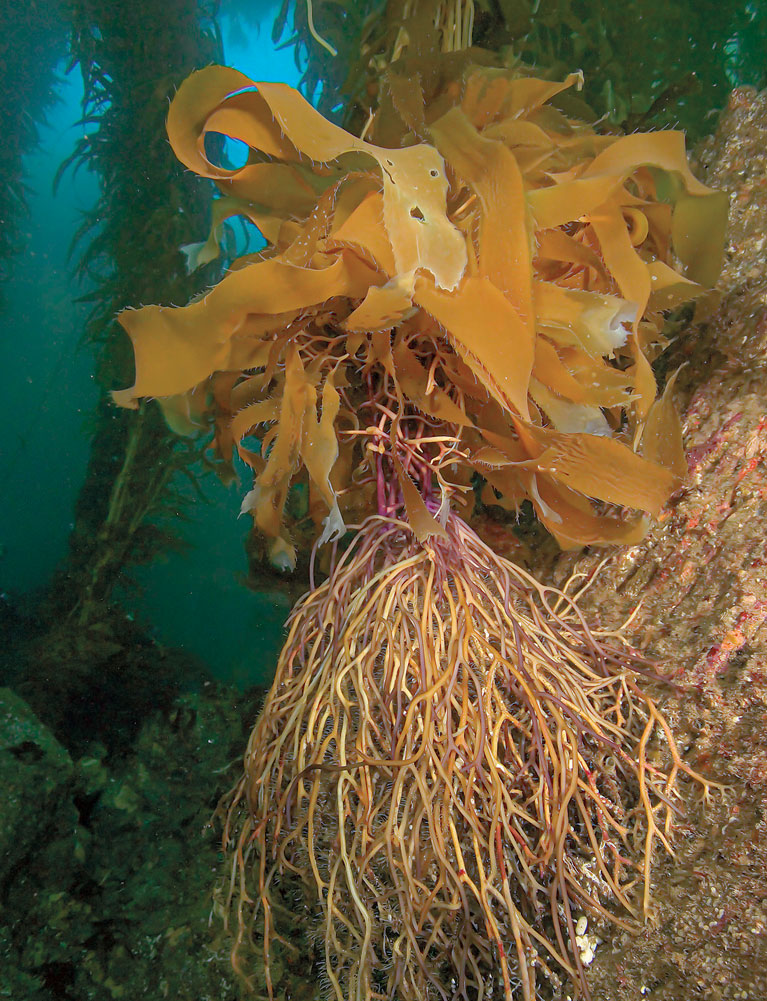 A holdfast of giant kelp anchors the frond to the substrate.

Giant kelp (Macrocystis porifera) is a species of brown algae, not a plant. Worldwide there are many species of kelps. All are restricted to cold water climates that hold the rich supply of nutrients they need to flourish.

Fronds of giant kelp grow from as deep as 130 feet along coastlines where sunlight is ample, water temperature is below 68 degrees F, and the sea floor is rocky. Spreading out once they near the surface, individual fronds attain a length of 200 feet. 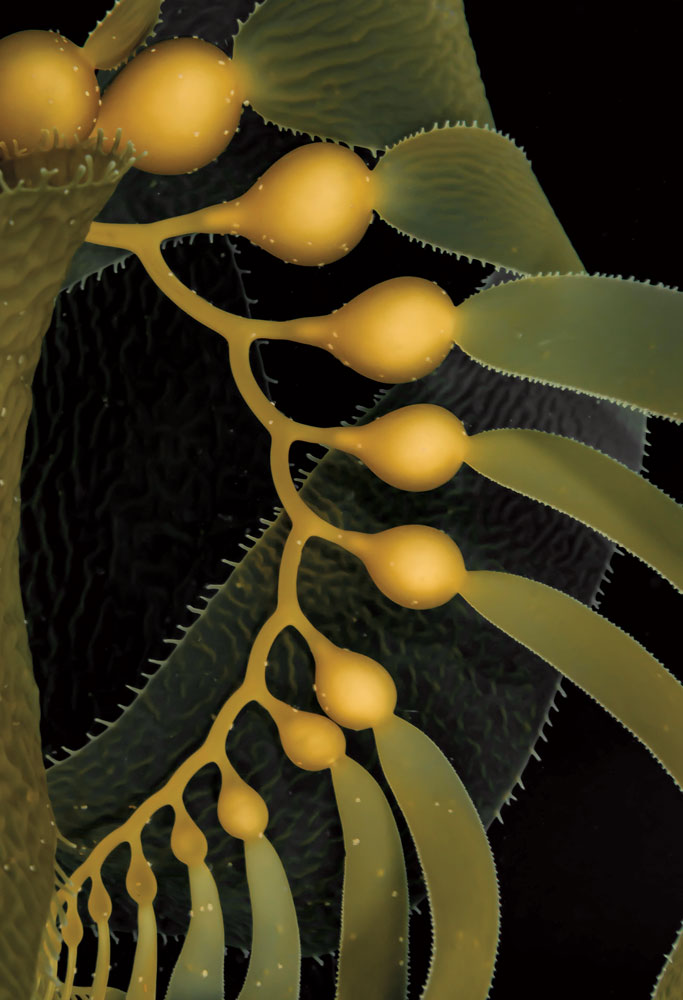 Gas bladders (aka pneumatocysts) of giant kelp help buoy the fronds toward the surface where the blades take advantage of the life-sustaining sunlight to create sugars shared with the rest of the frond.

Giant kelp fronds are composed of three parts; a stem-like stipe, leaf-like blades and gas-filled bulbs called pneumatocysts. The fronds grow upward from the sea floor, eventually combining with other fronds to form a surface canopy where the blades take advantage of the life-sustaining sunlight. A frond is anchored to the substrate by a holdfast, a collection of thin, spaghetti-like looking strands called haptera. A holdfast grips the rocks but does not bore into them.

Like the stems of terrestrial plants, stipes grow from the holdfasts toward the surface while carrying sugars from the blades to the rest of the frond. Gas bladders buoy the fronds and help the blades at the end of each gas bladder maximize sunlight by positioning them as close to the surface as possible. Similar to the leaves of plants, the blades create sugars through photosynthesis.

As many as 800 species can be found in healthy forests of giant kelp, and a single mature frond can support more than one million organisms. The canopy is home to many fishes and invertebrates, while the blades create places for attachment for numerous invertebrates as well as hiding places for many juvenile fishes and some adults. More than 100 motile species have been documented in and around the stipes. 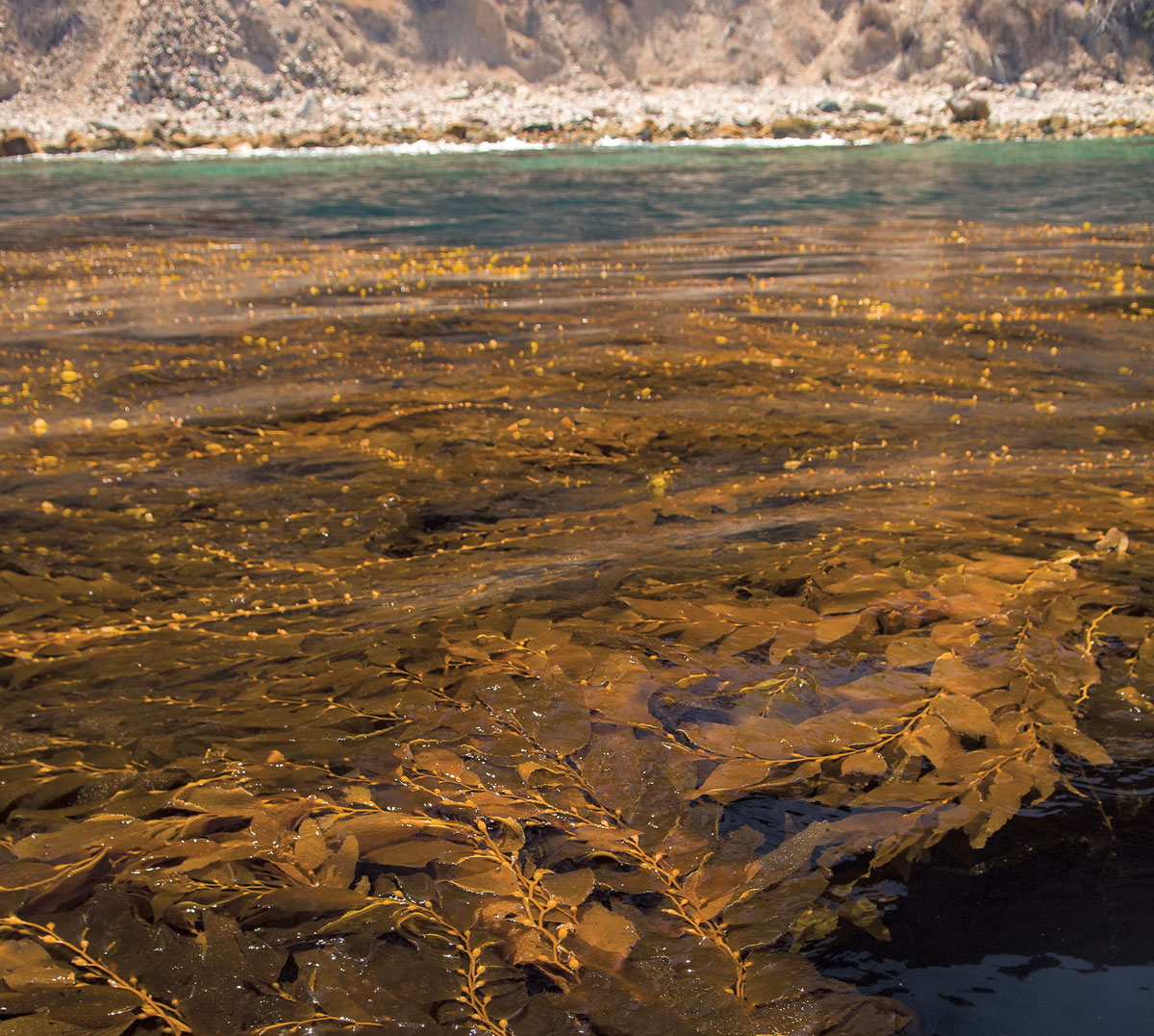 Like the leaves of plants, the blades of a giant kelp frond create sugars or the rest of the frond using sunlight to conduct photosynthesis.

Some kelp forests cover an area as large as ten square miles or more, while others only occupy a few hundred square yards. In ideal conditions, a giant kelp stipe can increase its length by as much as 18 inches per day. Blades of giant kelp are constantly being shed to prevent fronds from being over weighted by the sheer biomass of accumulated hydroids, bryozoans, and myriad microscopic creatures. The shed serves as a vital food source to bottom dwellers such as sea cucumbers, abalone and sea urchins.