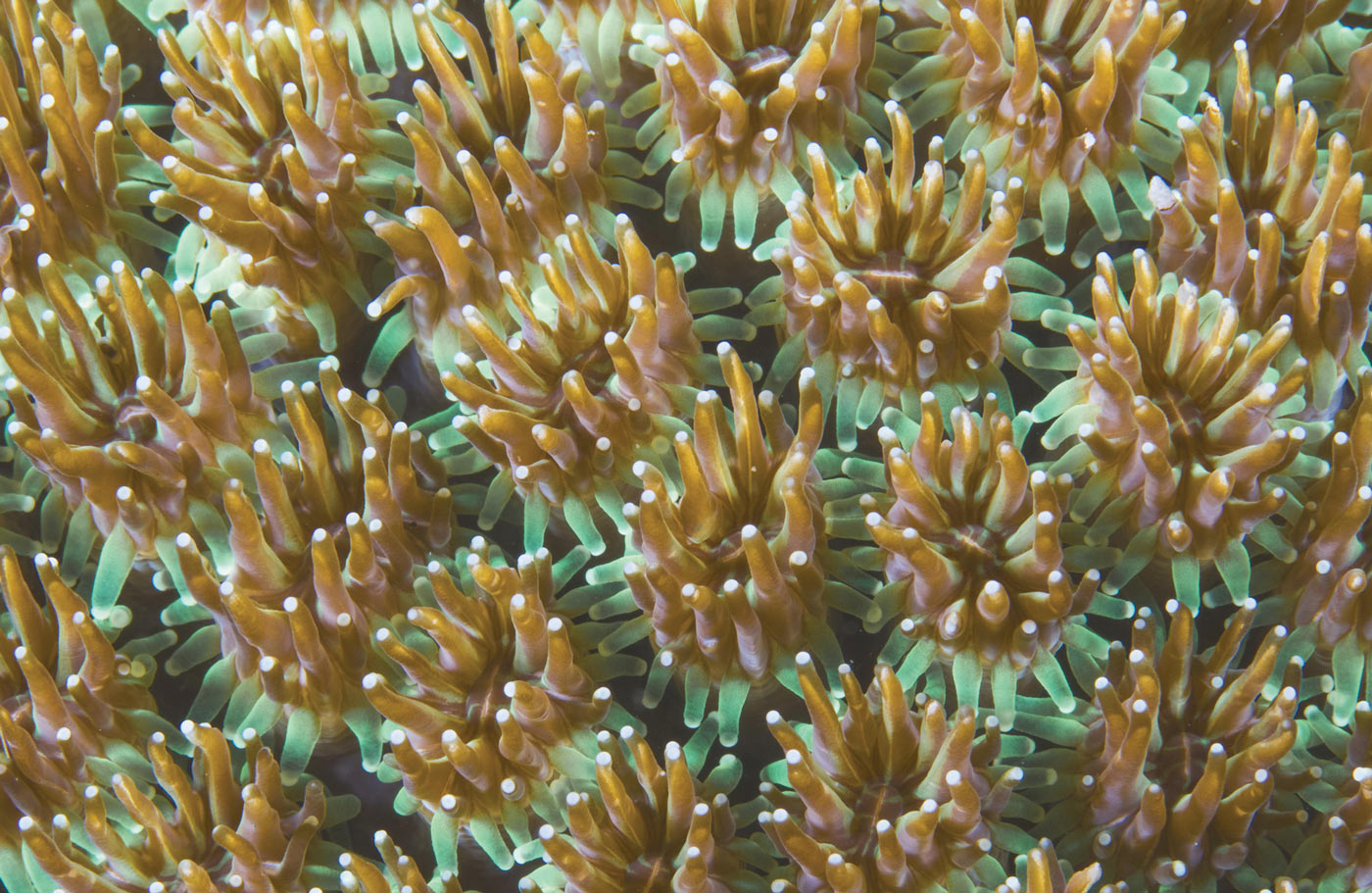 By Marty SnydermanJuly 8, 2022No Comments

Even though our local kelp forests support as many as 800 marine species, they can’t hold a candle to coral reef ecosystems, which are among the most productive and complex ecosystems on Earth. They provide shelter, places of attachment, nurseries, and food for many organisms, in addition to protecting vital mangrove swamps and shorelines from erosion.

Corals are animals. They are described in the phylum Cnidaria and the class Anthozoa. All cnidarians possess stinging cells, a fact reflected in the name Cnidaria, a word derived from the Greek for “stinging nettles.” All hard (aka stony and reef-building) corals are described in the order Scleractinia.

The majority of reef-building hard corals occur in tropical and subtropical waters around the world. 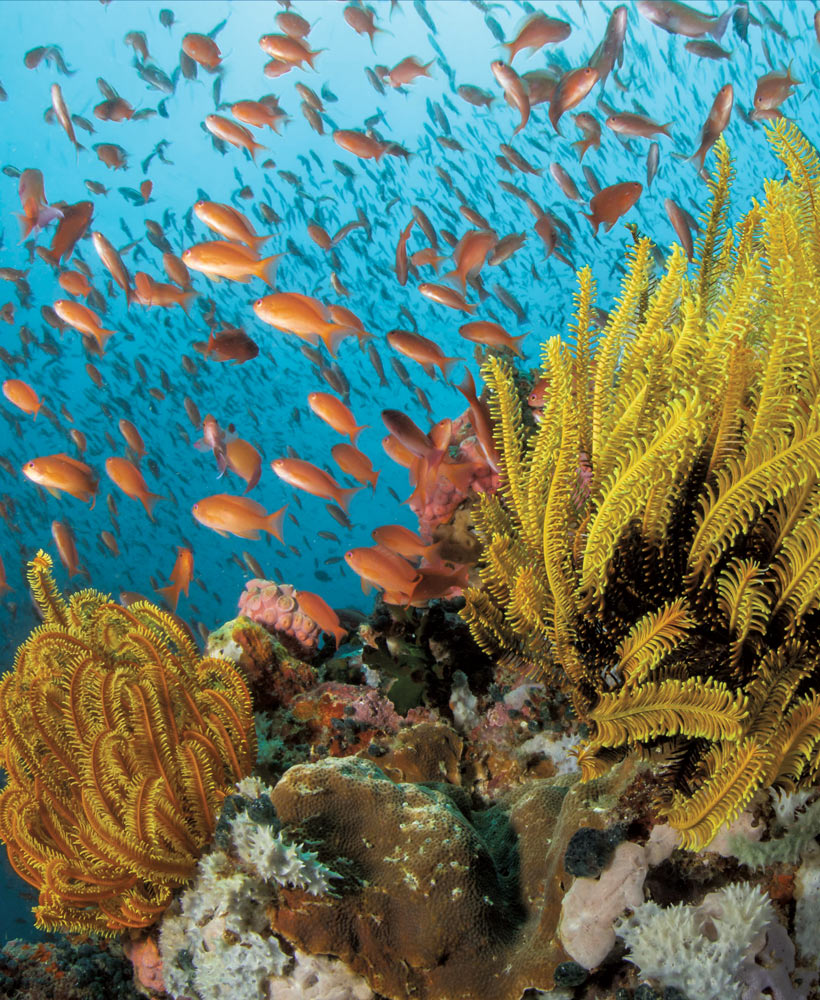 Witnessing a coral reef community is certain to fill you with a sense of awe as you view a stunning array of fishes, sun dappled hard corals, sea fans, soft coral trees, crinoids, sponges, and more.

Hard corals require sunlight and relatively clear water, so most are found between the surface and 230 feet. They also require between 32 and 42 parts per thousand of salt in the surrounding water.

There are three basic kinds of coral reefs; fringing reefs, barrier reefs, and atolls. Fringing reefs usually border a coastline, although some are separated from land by a slender body of water. Barrier reefs are separated from land by a lagoon. They develop parallel to land with the reef’s outline being a near mirror image of the shoreline. Ring-shaped atolls develop when islands surrounded by reefs collapse into themselves. Atolls isolate a central lagoon from the open ocean.

Using their pedal disc, individual polyps of hard corals attach to rocks and other hard substrate. Each polyp has a cylindrical body topped by an oral disc equipped with a centered opening that serves as both mouth and anus.

Individuals of most hard coral species are equipped with six tentacles or multiples of six. Corals use stinging cells called nematocysts located in their tentacles for defense and to capture small organic particles and planktonic organisms. Corals are primarily carnivorous with most species extending their tentacles to feed after dark. 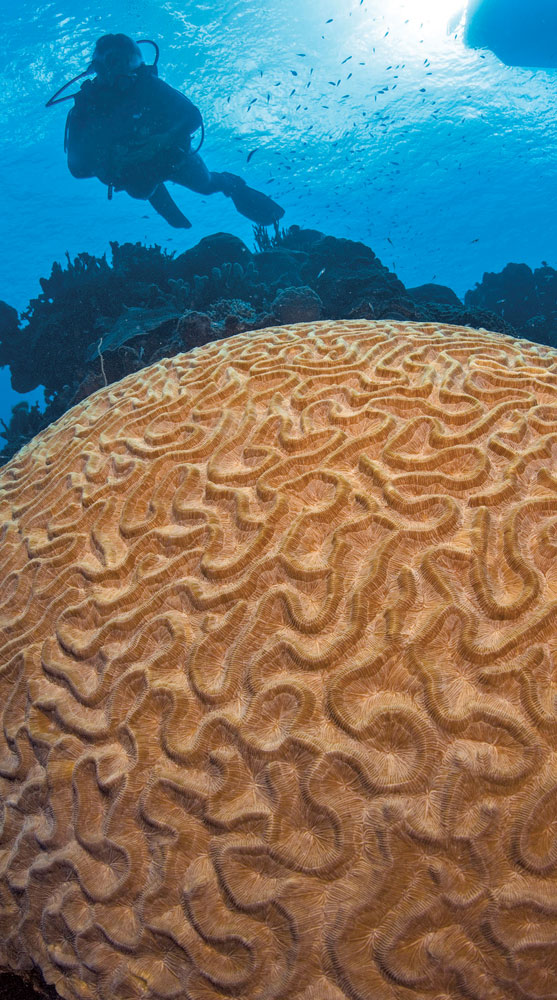 Coral heads, like this brain coral, are formed by the skeletal remains of generations upon generations as once living hard corals deposit layer upon layer of calcium carbonate they secrete on top of one another. Corals are primarily carnivorous with most species extending their tentacles to feed after dark.

Most hard corals are colonial. Reef structures are formed by the skeletal remains of generations upon generations as once living hard corals deposit layer upon layer of calcium carbonate they secrete on top of one another. After many years of this cycle, coral heads are formed. A single coral head (colony) can consist of hundreds of thousands of polyps. After many millions of years, a reef structure takes shape as the creation of a reef is an ongoing process.

Reef-building corals are the source of primary production in coral reef communities. Coral reefs support approximately 25 percent of all marine animals, including roughly 4,000 species of fishes. Many fishes inhabit coral reef ecosystems as juveniles, some only as adults, and still others for their entire lives.

Corals reproduce asexually and sexually. Individuals of various species can be male, female, or both.

The area bounded by Indonesia, Malaysia, the Philippines, Papua New Guinea, Timor Leste and Solomon Islands is known as the Coral Triangle, a name given for the nearly 600 species of hard corals found there. Stretching for 1,429 miles from north to south and as wide as 150 miles in some places, Australia’s Great Barrier Reef is the world’s largest coral reef. The worldwide economic valuation of coral reefs is between 30 and 172 billion dollars annually.