There is no fish in the sea more feared — or more fascinating — than the great white shark. In 1971, Peter Gimbel’s movie, Blue Water, White Death, focused public attention on this 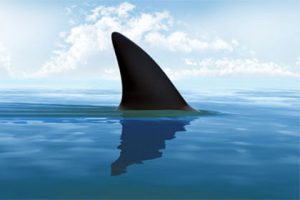 large animal. In 1974, Peter Benchley’s book, Jaws, and the movie of the same name released in 1975 caused general hysteria. People stayed out of the ocean. A photo of a great white that ran on the cover of Skin Diver magazine in July of the following year was said to have caused a downturn in the scuba diving industry.

Has the fear abated? Some of it. Though nearly 41 years have passed, these big fish continue to be the objects of considerable intrigue and trepidation and most people would not wish to find themselves eye to eye with one.

The great white’s genus name, Carcharodon, is Greek for “rough tooth.” Ancient Greeks bestowed the species name, carcharias. The largest one ever caught was a female, 20 feet long and weighing 3,419 pounds. Great whites are estimated to live 40 to 50 years.

Mating and Other Mysteries

Sex in the sea is not exactly easy. Lacking arms, a male great white uses his mouth to hold onto the female when mating, which produces nasty looking injuries. Sniffles, a female seen off Guadalupe Island, had especially severe scars. Her nose bore long white scratches and healed tears and her body had what looked like a deep puncture wound on one side.

The bodies of the males are a little sleeker than those of the females and the claspers used to inseminate the females are on their bellies. The females produce as many as 17 pups every three years. After internal fertilization the eggs hatch in the female’s uterus and the embryos feed on unfertilized eggs, a form of cannibalism known as oophagy. Gestation takes about 18 months. The pups are born live in the spring or summer and are miniature versions of their parents. They can be nearly five feet long at birth.

Where exactly great whites go to mate and give birth is a mystery.

The Shark Café is another mystery. In winter and spring, West Coast GWS of all ages and sexes aggregate for unknown reasons at a remote mid-Pacific Ocean area. The Shark Café is halfway between Baja California and Hawaii and was named in 2002 by researchers from the Monterey Bay Aquarium Research Institute who were using satellite-tracking tags to study the sharks’ movements. The researchers found GWS frequently travel to and hang around in the area, where they dive as deep as 1,000 feet as often as every ten minutes. No one has any idea why they go there and why they dive so deep. It isn’t for food because researchers haven’t found much there.

Other than that they are very large and have a huge mouth full of sharp, serrated teeth, one of the many reasons GWS are of such great interest is that they are difficult to study. Worse, the more they are studied the more questions arise. Mystery surrounds them. These sharks don’t thrive in captivity. Those that have been tagged do not stay in one area year-round; they travel incredible distances, many times going to places where humans cannot — yet.

We do know that great whites are found mostly in temperate waters worldwide. According to Milton Love’s Certainly More Than You Want to Know About Fishes of the Pacific Coast, they are abundant in the coastal areas of California and Baja California, Australia, New Zealand and South Africa.

Off the California coast great whites do seem to have become more numerous in the past few years. That may be the result of a combination of things, including laws that were enacted to protect them and their favorite prey, elephant seals and sea lions.

The great white’s diet appears to vary according to where they are and sometimes changes as they age and grow. There is this, too: According to Monterey Bay Aquarium, “Bites from white sharks is a major threat to sea otters in this area.” The question is, why do white sharks bite but not eat southern sea otters? Some believe biting is a shark’s way of figuring out if objects are edible. Apparently, sea otters fail the great white’s taste test.

While sea otters might not be the great white’s favorite snack, it seems they consider elephant seals a delicacy. Great whites are known to feed on elephant seals off the Farallon Islands, about 30 miles (48 km) west of San Francisco’s Golden Gate bridge. The Farallon National Wildlife Refuge is one of 63 designated National Wildlife Refuges. Much research on great whites has been collected there during the great whites’ feeding season, which typically runs between late September through November, when the elephant seal population is at its peak. The seasonal shark population at the Farallons is estimated to be between 30 to 100 animals. Individual sharks – with nicknames like Gouge, Stumpy and The Hunchback — have been known to return to the Farallons each year.

Although some divers have safely encountered great whites out in the open, the best way to encounter a great white shark is from the safety of a cage.

Several dive charter companies offer day trips to the Farallons during late summer and fall. Keep in mind that chumming is not allowed, and the underwater visibility averages 20 feet (6 m).

In 40-plus years of diving all over the world, the only time I’ve seen great whites was during a multi-day live-aboard trip to Baja’s Guadalupe Island.