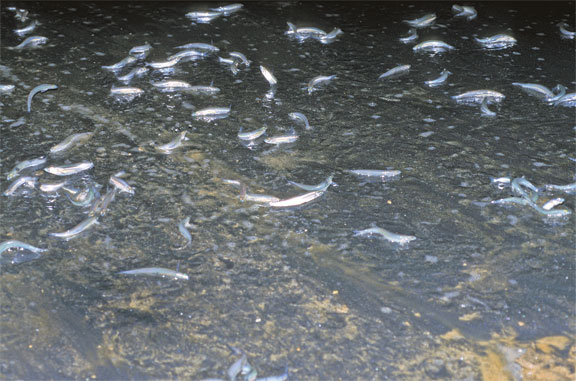 That a fish would leave the water and fling itself onto a beach at night in order to produce future generations seems preposterous. That it would need to factor in high tides and full/new moons when determining the right time to do so, stretches the limits of credibility. Yet California grunion do all these things. 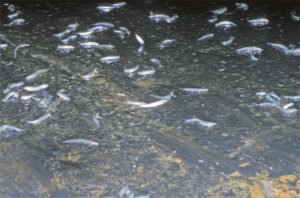 Reaching a maximum length of eight inches but usually only six, California grunion (Leuresthes tenuis) range from northern California to southern Baja. Leuresthes comes from the Greek for smooth and to eat and tenuis is Latin for slender.

Grunion spawn on the highest tides of the second, third and fourth nights following the new and full moons. The fish only spawn on sandy beaches, coming ashore in the thousands with incoming waves. On the beach, the females flop around until they find suitable terrain out of the water. Then they stand on their tails and wiggle them to dig a hole. When half of their bodies are buried they deposit their eggs.

Meanwhile, the gentle waves are bringing males, who flop around on the beach until they find a female, no matter that she may already have (or had) other suitors. The males wrap themselves around the females and release sperm, called milt, which resembles a small cloud of smoke. The milt runs down the females’ bodies and into the sand around them, fertilizing the eggs.

The males return to the sea immediately. They will spawn again that season. The females may have their eggs fertilized by any number of males and may or may not spawn again that season. They can release up to several thousand orange eggs and, when they are finished, wait for the next wave to take them out to sea. Spawning runs can last only a few minutes or as much as an hour.

Tides bury the eggs until they are covered by six to eight inches of damp sand. When they hatch depends upon the water temperature (61 to 81 degrees F is considered ideal) and when a set of high tides uncovers and agitates them. When conditions are not right, the eggs will remain unhatched for up to 35 days after fertilization.

Spawning is mainly from March through August, although this year there was considerable spawning in February. Grunion runs occur from Point Conception to Point Abreojos, Baja, usually after 10:30 pm.

Grunion may not be taken in April or May. During March, June and July those with a 2016 California fishing license may collect them. Those under 16 don’t need a license. Catching these fish isn’t easy, they are slender and slippery, not to mention determined to flop around until they find the right place to lay eggs or mate. Factor in that catching is a hands-only activity; that it is illegal to dig holes to entrap the fish; and that you will be wading around in cold seawater. Wear warm clothes and waterproof yourself as much as possible. Also, since the fish are so tiny, you’ll need a lot if you plan on making a meal of them.

Rather than catching them for food, perhaps you might simply enjoy witnessing their spawning behavior. From March through July, Cabrillo Marine Aquarium in San Pedro offers evening programs that include a presentation on grunion followed by a walk to a nearby beach to personally experience the frantic excitement of a grunion run. For more information visit cabrillomarineaquarium.org.

If San Pedro isn’t an option and you’d like to watch a grunion run, check out California Fish and Wildlife’s printable two-page PDF of expected runs. You’ll find it on their website. Search for California Grunion Facts and Expected Runs.

Grunion can live three to five years and are a schooling fish. They have few to no teeth. In the lab they eat live brine shrimp. In the wild they probably eat plankton. Grunion predators include humans, other fish, shore birds and sea lions. Birds, ants, sandworms, flies and a beetle eat grunion eggs. California Fish and Wildlife says grunion “inhabit the nearshore waters from the surf to a depth of 60 feet. Tagging studies indicate that they do not migrate.” The most serious threats to grunion survival include loss of habitat owing to beach erosion and harbor construction as well as pollution.

The author wishes to thank Dr. Milton Love, author of Certainly More Than You Want To Know About The Fishes Of The Pacific Coast, for his help in the preparation of this article.