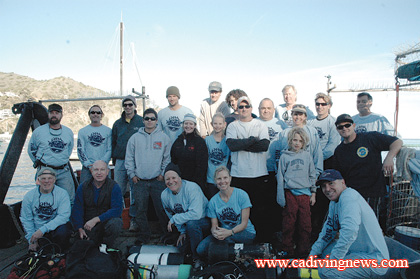 By California Diving NewsMarch 3, 2009No Comments

On January 10 and 11, 2009 a group of expertly trained volunteer scuba divers led by the Ocean Defenders Alliance (ODA) removed much of a large derelict fishing net sunk off Catalina Island, that was responsible for the death of dozens of protected marine mammals. If left in the ocean, many more animals would have suffered the same fate.

The commercial net, estimated to weight over 3000 pounds, was attached to the purse seiner Infidel which accidentally sank off the east end of Catalina Island about two years ago while fishing for squid. Although the wreck is 150 feet deep, the bounty caught in the net continued to attract and trap fish and invertebrates, including sea mammals, which become helplessly tangled in the net trying to catch the encased prey.

“I have never seen a derelict fishing net that massive before,” states Kurt Lieber, Founder and President of ODA.

In addition to long-time ODA volunteer divers, a group of commercial divers descended to help cut the net away from the trawler. Due to the depth and bottom time required, divers used nitrox gas mixtures and tri-mix for the potentially dangerous dives. Cinde MacGugan (a dive instructor with Catalina Divers Supply) organized a dive team that could remove the net from the deep waters.  Joining the crew, amongst others, were the Mayor of Avalon Bob Kennedy, UCI research scientist Dr. Bill Cooper, nature film producer Tony Christopher, and ODA diver Don Robarge. The net removal was a cooperative effort of the three dive stores in Avalon: Catalina Diver Supply, Catalina Scuba Luv and Dive Catalina. Independent divers Jason Manix and Donny Neel also assisted in organizing the dive team.

To facilitate the complex operation, nature documentarian Mike Hoover donated the services of his 70-foot ex-trawler, Captain Jack, which features a small submarine that has been used for National Geographic specials.

Ocean Defenders Alliance is a nonprofit marine conservation group based in Huntington Beach, California, founded in 2002 by Kurt Lieber, a long-time advisor and board director of the world-renowned Sea Shepherd Conservation Society (“Whale Wars” on Animal Planet). With a dedicated volunteer team of expert scuba divers and two work boats, ODA has removed over 4 tons of abandoned and derelict fishing gear from the sea floor, including rotting lobster traps and fishing nets that continue to needlessly ensnare and kill marine wildlife. For more information, visit their website at www.oceandefenders.org.