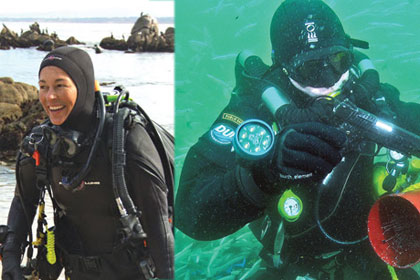 By Steven M. BarskyDecember 19, 2013No Comments

Diving is an important tool for many people in their work. For some, such as sea urchin divers, it’s their most important tool for getting the job done. For others, such as police divers, it’s just one in a selection of tools. Over the past year, we have done video interviews with 14 different people who are professionally employed in careers that involve diving. We wanted to find out what they do, why they do it, and what they like and dislike about their jobs. The people we have interviewed include a scuba instructor, a commercial diver, an underwater videographer working in Hollywood, an FBI agent, a marine biologist, and others. This article is the first in a multi-part series on some of the people interviewed who are professionally employed in diving.