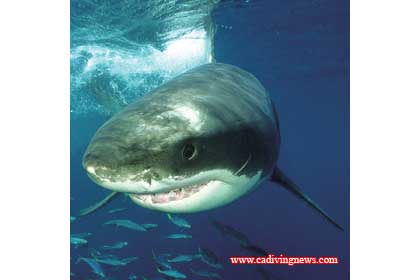 The image of a white shark invokes extremes in our emotions. They bring out a deep, primal fear in some, while others experience joy in observing their grace and beauty. White sharks are big–up to twenty-one feet long and 7000 pounds. They have a mouthful of serrated teeth that are effectively used to hunt fish when they are young, but switch to marine mammals after they grow to nine or ten feet. On very rare occasions they will bite a human. Yet, those who have observed this top end predator from the safety of a shark cage talk about the fluidity and gracefulness of their movements and how intelligent they are.

We know surprising little about white shark biology and even less about their behavior. Until very recently we only learned about white sharks by dissecting dead animals or by observing them on or near the surface–only during the day, and mostly during feeding or baited situations. Modern technology, including dorsal fin satellite and acoustic tags and modern DNA techniques, is changing how scientists conduct marine research, and has begun to reveal how and where they spend most of their time. Much of new information is coming out of the work of Salvador Jorgensen1, Michael L. Domeier2 and their colleagues.
It now appears as if there are a handful of sites along the west coast where white sharks spend the months of August through March. These sites include the South Farallon Islands, Año Nuevo Island, Point Reyes, and Tomales Point in central California, and Guadalupe Island off the coast of Baja Mexico. Here, they principally feed on marine mammals (all sites) and tuna (only at Guadalupe). There appears to be very little mixing of white sharks between these areas–a very few sharks visit both the Farallons and Año Nuevo in a season, and there are no records of sharks sighted and tagged in the Northern California locations to have visited Guadalupe, and visa-versa. DNA evidence shows that the northeastern Pacific population of white sharks is genetically distinct and do not mix with those from South Africa, Australia, or New Zealand.
From April through July there are almost no sightings of white sharks along central Pacific coast, and until recently we had no clue where they went and what they did. From electronic tags we now know that they undertake a 2,000 to 5,000 mile migration each year to visit two principal areas–the waters surrounding the Hawaiian Islands (some travel as far as Midway Island), and an area about halfway between the southern tip of Baja California and Hawaii, an area scientists have dubbed the “Café.”
The Café is a relatively small area, roughly elliptical and the size of Vermont. Satellite tags showed that the white sharks swim on the surface, directly and non-stop, between the U.S. west coast to the Café. Upon arrival at the Café, white sharks dive straight down to an average depth of 1,200 feet, and then immediately return to the surface. This cyclic behavior seems to be a non-stop, all day/all night activity. This type of behavior is typical of animals feeding within the open-ocean, perhaps on squid or animals that feed on the squid. White sharks in Hawaii also spend most of their time in this up and down pattern, but dive a bit deeper, around 1,800 feet.
So why do white sharks make the long migration twice each year? There are a number of hypotheses, but most believe it for feeding, mating, or both. Spring and summer is the time when the large shark’s favorite prey, elephant seals, are absent from their winter haul out sites, although other marine mammals are year around residents. White sharks maintain their body temperature above ambient, and they may leave Northern California when upwelling drops the sea temperature and some prey becomes scarce.
White sharks may make the trip principally to mate, since both sexes are present in the Café, and even after decades of observation no one has ever witnessed or inferred a white shark mating/copulation act along the coastal observation sites. Also, adult male white sharks appear to have a strong propensity to feed on newborn white sharks. We know females give birth near shore in the Southern California coastal region between Malibu, California and Vizcaino Bay, Baja California when males are absent from this area; and females typically give birth and visit their coastal feeding areas every other year. The Café may provide a suitable area for mating while segregating and protecting young sharks that remain in coastal waters. Until more information becomes available, we can only speculate on why white sharks undertake this long migration each year.
Scientists now estimate there are only between 200 to 300 white sharks in the northeast Pacific, although the world’s population is still unknown. White sharks are protected in California and Mexican coastal waters, but not the rest of the Pacific. These and other studies emphasize the need to manage sharks and other oceanic animals on a worldwide basis and not country-by-country.
1Philopatry and migration of Pacific white sharks, Salvador J. Jorgensen, et. al. Proceedings of the Royal Society B, November 2009, available online for no charge at: “http://rspb.royalsocietypublishing.org”.
2Migration patterns of white sharks Carcharodon carcharias tagged at Guadalupe Island, Mexico, and identification of an eastern Pacific shared offshore foraging area, Michael L. Domeier, Nicole Nasby-Lucas, in Marine Ecology Progress Series, 2008, available online for no charge at: “www.int-res.com”.